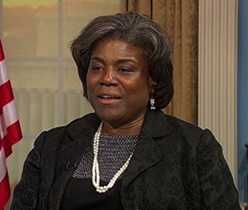 The United States of America has described corruption as Nigeria’s greatest stumbling block, lamenting that the malaise is deeply

rooted in the system.

Along this line, the U.S. Government is working closely with its Nigerian counterpart as well as the justice sector and other elements to ensure that those individuals who are involved in corruption are held accountable in the legal system of Nigeria.

This was disclosed by U.S. Assistant Secretary, Linda Greenfield, during a media web chat on ‘Foreign Policy in Sub-Saharan Africa’ held Thursday afternoon at the U.S. Embassy in Abuja.

According to Greenfield, “Corruption, we have said many times, is cancerous and it goes without saying that Nigeria has been affected greatly by corruption and it is something they will have a hard time to rewrite.”

On the issue of Boko Harram, Greenfield said that her country views the sect as a terrorist group and is working closely with the Nigerian Government to address the security threat.

Greenfield said: “Terrorism affects people everywhere and we are working to assist our colleagues affected by this trend, be it Kenya, Somalia or Nigeria, in addressing this trend. I want to offer my condolences to Kenya following the Westgate terrorist attack and I want to once again say that we are horrified by the attack in Nigeria on young people and we do see it as a terrorist threat. We also offer our condolences to the people of Nigeria.”

The U.S. Assistant Secretary who is only two months in office stressed that US interest in Africa is centered on people in other to promote regional peace, security, development in trade and investment.

She listed the three major initiatives by the U.S. — earlier announced by President Barack Obama during his recent African tour – to include Power Africa, Trade Africa and YOLY (Young African Initiative), a programme aimed at encouraging African youths to take up responsibilities.