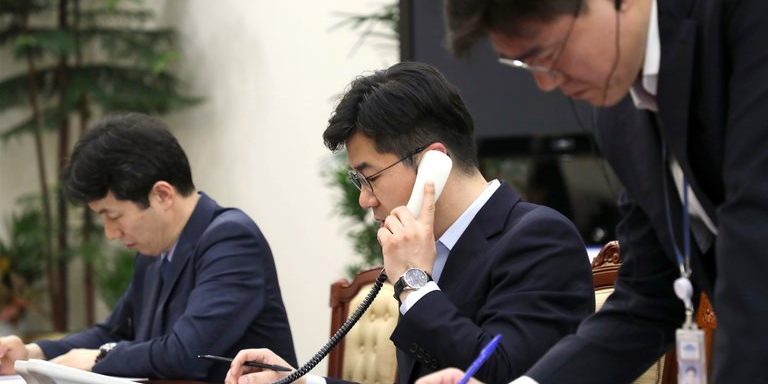 SEOUL, South Korea — North and South Korea on Friday installed what officials said was the first-ever hotline between their top leaders, another sign of improving relations on the divided Korean Peninsula.

President Moon Jae-in of South Korea was expected to use the hotline, which was installed in his office, to talk with the North’s leader, Kim Jong-un, before the two leaders hold their summit meeting on the Korean border next Friday. But no date has been set for their first call.

The two Koreas have run a telephone hotline at the so-called truce village of Panmunjom — the venue for the inter-Korean summit — for years. Duty officers from both sides man their telephones at Panmunjom daily in case one side calls the other. The line has been cut off at times when bilateral relations have soured, but communications there have been restored.

The hotline telephones were installed on Mr. Moon’s desk in Seoul, the South’s capital, and in the State Affairs Commission in Pyongyang, the North’s capital.

When Mr. Moon’s special envoys met with Mr. Kim in Pyongyang last month, the two Koreas agreed to install the hotline and arrange for Mr. Kim and Mr. Moon to use the phone before their summit meeting. In the same meeting, Mr. Kim said he was willing to negotiate with the United States on abandoning his country’s nuclear weapons.

President Trump recently dispatched the C.I.A. director, Mike Pompeo, to meet with Mr. Kim to lay the groundwork for their meeting, which will be the first-ever summit meeting between the two nations.

South Korean officials hope the hotline will improve communications between the top leaders and pave the way for improved ties between the two Koreas. The hotline could also be used to avert unintended armed clashes between the sides, they said.

“Now, if working-level talks are deadlocked and if our officials act like arrogant blockheads, President Moon can just call me directly and the problem will be promptly solved,” Mr. Kim was quoted as telling the visiting South Korean envoys last month.

On Friday, aides to Mr. Moon and Mr. Kim officially opened the line and checked the connection for about four minutes, said Youn Kun-young, director for the government situation room at Mr. Moon’s presidential Blue House.

During the line check, a South Korean and a North Korean caller briefly discussed the weather, according to Mr. Moon’s office.

”The connection was very good,” Mr. Youn said. “It was as if talking to a neighbor right next door.”