CONFESSION: I was responsible for Amaechi’s 2007 woes not Dr. Peter Odili – Obasanjo. 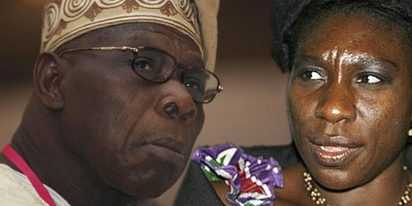 FORMER  President Olusegun Obasanjo has said that he should be held responsible  for the travails of the Rivers State Governor, Mr. Rotimi Amaechi,  before and after the 2007 governorship election.Obasanjo explained that rather than  blame Dr. Peter Odili, who was Amaechi’s predecessor, the state governor  should realise that he (Obasanjo) was fully in charge and responsible  for his (Amaechi) woes.It will be recalled that Obasanjo  surprisingly denied Amaechi the PDP governorship ticket during the build  up to the 2007 general election in Rivers State, declaring the  Ikwerre-born politician’s case as having a K-leg.K-leg is an euphemism used by Obasanjo in 2007 to describe the reason why he did not give Amaechi the governorship ticket.The matter was later resolved by the Supreme Court, which declared Amaechi the governor of Rivers State.Speaking on Monday in Eleme Local  Government Area while inaugurating some projects executed by the Amaechi  administration, the former President added that he had no apologies for  taking such a decision seven years ago.“I want to acknowledge your courage. I  phoned the governor; I hope he will remember and I said, ‘Governor  Amaechi, don’t take anything against your predecessor because whatever  decision was taken about you, hold me responsible, not your predecessor  because I was the one fully in charge.“So, if anything has been done because I  took a decision that I believe is right, that I believe I should take  when I took it, I have no apologies. This is because I don’t take  decisions lightly.“When I have to take decisions, some  that I find very important, I fast and pray before I take them. I ask  for God’s guidance and direction,” Obasanjo said.On Amaechi’s governorship ambition that was declared to have a K-leg, the former President argued that since the Supreme Court had delivered its verdict in favour of Amaechi, the issue of K-leg had been resolved.Recalling that at a time, he was one of  those that felt the Supreme Court’s verdict was awkward, Obasanjo said  those who were not satisfied with the ruling should wait for the  judgement of the ‘Supreme Being.’“The governor talked about K-leg.  I believe that as a leader, when I have something that requires action,  that action must be taken, otherwise I am not a worthy leader. “A report came about him, which indicated K-leg, and I said yes, there was a K-leg and as a result of the K-leg,  what was could not continue to be what it was. Rotimi (Amaechi) did  what is required in a democratic dispensation; he went to court to  straighten the K-leg.“I am one of those who when he (Amaechi)  got the judgment or the verdict found it awkward. I did not voice it  out publicly, but I found it awkward. Awkward in the sense that how can a  man who has not contested an election, a man who has not been voted for  be declared the governor?“But I mused about it and people went to  a higher court. I think he (Amaechi) took it to the Supreme Court and  in the Supreme Court, he won. As far as I am concerned, that is the end  of the K-leg.“If anybody is not satisfied after that, he has to wait for the judgement of the Supreme Being up there. So, the K-leg has been straightened; not only that, after his first term, he (Amaechi) contested and won with a landslide. Then what K-leg are you talking about again?”He, however, advised public office  holders against using their time to cover the achievements of their  predecessors, adding that those in power should endeavour to correct the  errors made in the past by their predecessors.He praised Amaechi for his efforts  towards developing the state through the execution of infrastructural  projects, saying, “I feel proud that by association, I am part of the  work you are doing in the area of infrastructural development,  particularly education and road transportation infrastructure.”Earlier, Amaechi said that he brought  the former President to Port Harcourt to showcase what he had achieved  in the past seven years. He described Obasanjo as a good leader.Amaechi pointed out that he got the idea  of the model school from Achimota in Ghana while he was in exile in the  West African country.“Each of the schools has a capacity of  1,050 students and two persons per hostel room, equipped with such  gadgets as computer and other facilities,” he said.Projects commissioned by the former  President on Monday are Chief G.U. Ake Road, Ken Saro-Wiwa Road,  Elekahia-Rumuamasi Road, Okporo Road, Model Primary Health Centre,  Akpajo, Songhai Farm, Afam Power Station and Ambassador Nne Kurubo Model  Secondary School.Meanwhile, Obasanjo has told Amaechi to  ignore his detractors and concentrate on delivering the dividends of  democracy to indigenes of the state.Obasanjo said this at a gala organised in his honour in Port Harcourt after he inaugurated some projects on Monday.The former President said that he was  not in the state for political purpose but to see the developmental  strides of the governor.He said, “What we have seen in the rural  areas and area of infrastructure is worth believing and on the basis of  this, I will say that you should not worry about what people who do not  like you as much as you would want them to.“You should worry about  your conscience, your God and those who voted for you. If your  conscience tells you that you are doing the right thing, keep doing it.”
by Chukwudi Akasike and Maureen Azuh