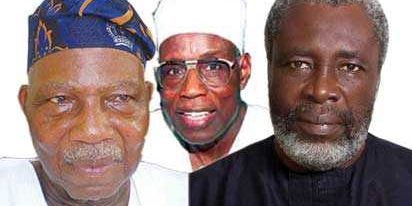 The pan-Yoruba group, Afenifere, and its Igbo counterpart, Ohanaeze Ndigbo, have said they will reject any move to limit discussions at the national dialogue being planned by President Goodluck Jonathan.

Afenifere, which spoke through its Secretary, Chief Seinde Arogbofa, in an interview with one of our correspondents in Akure on Thursday, said that the proposed national dialogue should not have no-go areas.

Also, the Secretary General of Ohanaeze Ndigbo, Dr. Joe Nwaorgu, told Saturday PUNCH on the telephone on Thursday that the dialogue should be frank and blunt, adding that all national issues should be discussed.

The Afenifere secretary explained why the group was insisting on a sovereign national conference.

He said that it was necessary that the conference was designated as sovereign so that the outcome could be taken seriously.

“The sovereignty we are talking about is to ensure that the discussions are taken seriously. It is to make sure that what the people arrive at is taken seriously by the government,” Arogbofa added.

According to him, government appointees should not participate in the discussion.

He said ethnic and social- cultural associations as well as other pressure groups should take part in the conference.

Arogbofa added that bodies such as the Nigeria Labour Congress; the Academic Staff Union of Universities and civil societies should be invited to the national dialogue.

He said, “There should be nothing like ‘no-go-areas.’ Nigerians should be free to discuss all the issues of contention so that they can find ways of living together as one people.

According to him, political parties are also essential groups within the polity and therefore should also have representatives at the conference.

On the mode of election or selection of the representatives, he said, “One person should represent each group. Bigger groups should get two representatives each to ensure balance.”

Also, Ohanaeze Ndigbo said, “Nothing should be sacrosanct. All cards are open. It should be such that any group should be free to say, ‘I don’t want to stay and their position will be respected.”

The Ohanaeze Ndigbo secretary general said that all the six geo-political zones in the country should be represented at the conference.

“From the North- East, the Kanuri and all the smaller ethnic nationalities should come. It should be the same thing with the North-Central zone.

“The dialogue should be based on the ethnic nationalities that the white man met in 1900 before the amalgamation,” he said.

The Ohanaeze secretary said representation should be determined by the ethnic nationalities, not by selection or appointment by the President or government. “The President’s hand must be cleared of this,” he said.

Nwaorgu further said that the number of people representing a zone or ethnic nationality should not matter. “What should matter is the quality representation and whether the representatives are speaking the mind of the group they represent or not.

“We are not dividing money there. We are talking for the betterment of Nigeria, so far as they are speaking the mind of their people,” he said.

On its part, the Niger Delta Youth Parliament has said that the selection of representatives for the dialogue should not be done by governors of politicians.

The NDYP National Coordinator, Mr. Imoh Okoko, said Nigerians should rather be allowed to select those that would speak for them at the conference, adding that governors and other politicians should not be allowed to meddle in the exercise.

Okoko also expressed the need to select some youth leaders from various ethnic groups to be part of the discussants during the proposed conference.

He said, “The governors have always had their way in the selection of those to represent Nigeria in the past and at the end, nothing much came out of it. So, politicians, especially the governors, should not select representatives for us.

“Nigerians can pick those to represent them at the National Conference. The youths should be involved. They should be allowed to say their minds on the way forward for the country.

“Apart from that, traditional rulers know the line of thought of their people. Therefore, their presence will be important during the National Dialogue. I am surprised that the Federal Government did not consider the youths to be part of the committee on the National Conference.”

But the National Coordinator, Coalition of Northern Politicians, Academics, Professionals and Businessmen, Dr. Junaid Mohammed, has said the National Assembly should be allowed to drive the proposed National Conference.

Mohammed said this in a telephone interview with Saturday PUNCH, in Abuja, on Thursday.

He argued that members of the National Assembly, who are the elected representatives of the people, should be allowed to drive the process on the basis of the fact that they were elected by the people.

The physician turned politician noted that the National Assembly would be rendered redundant if those clamouring for a Sovereign National Conference had their way.

He said, “The National Assembly should lead the discussions so that Nigerians will know that we are dealing with the people who are our representatives.”

According to him, those proposing that the conference should be based on ethnic nationalities cannot tell with certainty how many such nationalities exist in Nigeria and where they are located.

He said, “What will be the basis of representation in the so- called Sovereign National Conference?”

He expressed doubts about the motive behind the proposed conference, adding that it was becoming clear that even those championing the call for convening the conference were yet to do their homework.

He said, “Each time we talk about this kind of conference it looks like exercises in fraud.

“Now, he (President Jonathan) has appointed a chairman and a secretary two days after he appointed 15 other people.”

Junaid warned that the National Assembly stood the risk of becoming redundant should the sovereign national conference proposal sail through.

He said the conference should provide answers to the challenges of poverty, illiteracy, insecurity, corruption and inadequate health facilities among other social infrastructural decay.

“Talking about no-go areas is neither here nor there. Nobody knows what the agenda of the President is, they are determined to force an agenda on us; let them tell us what they want to do then we can set parameters.