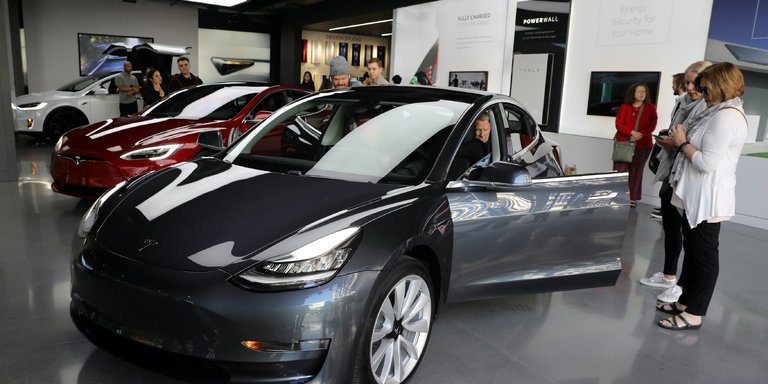 With Tesla in a Danger Zone, Can Model 3 Carry It to Safety?

As I zipped up the West Side Highway this week in a gleaming red Tesla Model 3, I found myself wondering: Are American drivers ready for Autopilot?

Autopilot is Tesla’s enhanced driver-assistance technology, which the company maintains is the most advanced autonomous-driving system available. Tesla says all its vehicles “have the hardware needed for full self-driving capability at a safety level substantially greater than that of a human driver.”

In this case, I was the human. I had tried a gull-wing Model X last fall with an earlier version of Autopilot, but since then the stakes — for both Tesla and consumers — have soared.

On March 23, a driver was killed in Mountain View, Calif., after a Model X crashed into a concrete highway divider while Autopilot was in use. The fatal accident attracted intense media coverage and sent Tesla stock, long an investor favorite, into a nose dive.

Four days later, Moody’s downgraded Tesla’s debt from stable to negative. Tesla was already so plagued with Model 3 production delays that its chief executive, Elon Musk, said he had been sleeping on the factory floor. By the beginning of this week, Tesla shares had dropped over 30 percent from a peak of almost $390 a share last summer.

Despite this wave of negative publicity, it seems clear that Tesla will rise or fall based on the performance, safety, design and value of its cars. If it gets those things right, all the other issues will sort themselves out. Tesla has already defied skeptics and attracted legions of die-hard fans by surmounting seemingly impossible odds to build all-electric cars that have drawn lavish praise from automotive critics.

That includes the Model 3, which Popular Mechanics named its 2018 Car of the Year. (It was a finalist for Motor Trend’s similar award. That it lost out to the Alfa Romeo Giulietta has drawn howls of online protest.)

When my Model 3 test vehicle pulled up to the curb on Eighth Avenue, it didn’t quite stop pedestrian traffic the way opening the gull-wing doors on the Model X had, but I could see why the automotive press is so excited. The interior features a single slab of wood sweeping around the cockpit interrupted only by a touch-screen interface that houses nearly all the controls, many of them voice activated.

With its Zen minimalism, it doesn’t look or feel like any other car I’ve been in. The synthetic-leather seats are comfortable, and there’s ample room for someone my size (6-foot-3). This all comes at a cost: $57,500 for this luxurious long-range version, far from the $35,000 base price that has excited many potential Tesla buyers.

The Model 3 may not have the rocketlike acceleration of the X, but I found it nimble and responsive. I easily accelerated from a full stop into traffic flowing at highway speed, usually a nerve-racking maneuver in a conventional car. Driving the Model 3 was such a pleasure I was reluctant to cede any control to Autopilot.

For someone with decades of experience driving a conventional car, my first taste of semiautonomous driving last fall had come as a shock. The sensation of a vehicle moving on its own was so bizarre that I instinctively gripped the steering wheel, which immediately transferred control back to me.

This time I was more relaxed, willing to see how the car would behave. I gave the voice-activated navigation system a destination (Garden State Plaza, a New Jersey shopping mall about 20 miles away), and the car accelerated, braked, stayed in the center of the lane and maintained a comfortable three-car distance ahead of me, all without my intervention. At the mall, it detected an empty parking place, and flawlessly backed into it.

One of its most impressive features is the ability for the driver to change lanes simply by pressing the turn-signal lever. The Tesla scans for traffic in the adjacent lane, waits for an opening and then glides into place, eliminating the danger of a blind spot. (Over the years I‘ve experienced several close calls involving lane changes and blind spots.)

Although I’d been briefed on its limitations, so successful was Autopilot that I was tempted to let down my guard by not bothering to look in the rearview mirror. That would have been a mistake.

For all its vision capabilities (including in darkness), Autopilot became confused when lanes weren’t clearly marked or split in two or at exit ramps. You can’t simply program the destination and let the car find its way. It’s reassuringly cautious about changing lanes, but in heavy traffic, I would have missed an exit while waiting for it to find a suitable opening, and had to assert manual control.

While heading south on the New Jersey Turnpike, I could see in the rearview mirror a BMW bearing down at high speed. I pushed the turn signal for a lane change, and despite its ultrasonic sensors, the Tesla seemed oblivious to the onrushing car. It started to move into its lane; the driver laid on his horn, and I had to grab control to avoid an accident.

Blog posts indicate that other drivers have experienced the same issue.

The Tesla owner’s manual describes this situation as one that the system can’t yet manage. Tesla said it expected future upgrades to solve the problem, but for now, drivers need to be as attentive to the rearview mirror as with any other car.

At this juncture, Autopilot is a misnomer, as many others have observed. “This is not self-driving technology,” said Bryan Reimer, a research scientist and expert on autonomous vehicle technology at the Massachusetts Institute of Technology. “It’s a collaborative system that leaves responsibility for safety in the drivers’ hands and isn’t intended to let them sit in the back seat or pursue other activities while driving.” Even though some companies have said they plan driverless ride services in as little as two years, Mr. Reimer said full automation was likely to be many years or even decades in the future.

Self-driving automation systems are ranked from zero (no automation) to 5 (full automation). Tesla’s Autopilot is Level 2. It requires drivers to keep at least one hand on the wheel. The car issues a prompt if it doesn’t detect a hand on the wheel, and Autopilot shuts down if there’s no response. In the Mountain View accident, Tesla has said, the driver “received several visual and one audible hands-on warning,” but “the driver’s hands were not detected on the wheel for six seconds prior to the collision.”

Given that this was my first extended drive using Autopilot, I was hypervigilant, maybe even more so than in a conventional car. I’m told that wears off in time, as using Autopilot becomes second nature. The risk is that complacency contributes to driver inattention. Mr. Reimer and other experts are conducting research into the issue.

“As technology supplants human performance,” Mr. Reimer said, “the bigger question is how safe is safe enough. If lane-changing technology is 50 percent more effective than humans, is that good enough? That’s the big question no one wants to answer.”

At the same time, he said, he worries that “intense media coverage of accidents like Mountain View will scare people off.” He said it was too soon to draw any conclusions from that fatality, but noted that Tesla’s excellent safety record over the many millions of miles its cars have now traveled suggested that using Autopilot “can’t be substantially more risky than conventional controls.” (There were more than 40,000 traffic fatalities in the United States last year.)

After my drive in the Model 3, my sense is that even with its flaws, Tesla’s Autopilot is a vast improvement over conventional controls, and enhances (rather than supplants) the driving experience. I’m tempted to join the Model 3 waiting list, which numbers over 400,000 customers.

Investors, too, seem to have reassessed Tesla’s recent bad news. This week, Tesla said it had succeeded in ramping up production of the Model 3, though it still fell short of targets, and had adequate capital for the rest of the year. Tesla shares jumped 13 percent on Tuesday and Wednesday.