Colonel, 15 other in trouble •How they burnt armoured cars and ran away as Boko fighters approached 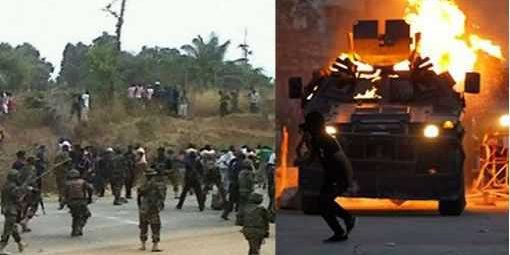 Another set of officer and soldiers are soon to face a court martial for negligence and destruction of military vehicles and equipment in the ongoing war against Boko Haram insurgents.
An authoritative military source disclosed to Saturday Tribune on Friday that a colonel and 15 of his soldiers had abandoned battle after first destroying their

own Armoured Personnel Carriers (APCs) and armoured tanks and then lied about the destruction of the vehicles by ascribing it to insurgents.

According to the source, the colonel and his soldiers “were pushing forward towards the terrorists in Adamawa Sate, while other troops surrounded them. And as the troops were moving towards the insurgents with air support and passing information to the troops, the pilot informed the commander that the Boko Haram insurgents were coming in six Hilux vehicles. Then, the commander and his troops jumped down from the Armoured Personnel Carriers (APCs) and armoured tanks, set them ablaze and took to their heels.”

The source said that the colonel and the soldiers reported to their superiors that the equipment were destroyed by insurgents.

“Consequently, a board of inquiry was set up only to discover that the APCs and armoured tanks were set ablaze by the troops,” the source told Saturday Tribune.

The source added that following the indictment of the troops, a court martial is soon to be convened to try the officer and the 15 soldiers.

The top military source disclosed that since the commencement of court martials, the attitude of the troops to the war against insurgency has changed, hence they were able to record victories in Konduga, Michika, Madagali and other places.

Saturday Tribune was also informed by the source that, “Orderlies to commanders in battle have turned informants to Boko Haram terrorists.

“The situation is so bad that commanders are now afraid to make calls in the presence of their orderlies who will in turn inform the Boko Haram terrorists that the troops are coming to attack.

“This enables the terrorists to ambush the troops, hence the heavy casualties being recorded by the troops.”

The Chief of Defence Staff, Air Chief Marshal Alex Badeh, had on Wednesday, at the three-day retreat organised by the office of the National Security Adviser on “Media/Security Relationship in Crisis Management,” justified the death penalty imposed on 12 soldiers that were earlier tried for mutiny.

He said that “the day you join the military, you have signed off, whether life or death, and it is “obey before complaint.”

According to him, “soldiers just jump out of APCs because you want to donate APCs to Boko Haram, and somebody is there talking about constructive mutiny.”

He added: “The laws are there, if you run away from the enemy, you will die and that is what the military law says.

“Apart from the old Nigerian law, we abide by the military law. Nobody forces or conscripts anybody into the military; it is a voluntary service, and so if we have this type of challenge, you should be able to confront it and not run away.”