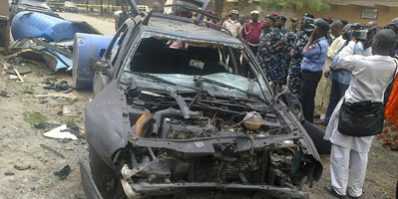 Indications emerged yesterday that the Nigerian troops were set to take up battle with the invidious Boko Haram terrorists, who have pitched their tents in the Northeast, wreaking havoc around the region.

In several tweets from his Tweeter Handle ‘#abati1990’, Presidential spokesman, Reuben Abati, posted four pictures depicting Nigerian soldiers in combat-readiness to confront the Boko Haram insurgents.
Abati said in one of the tweets with a photograph showing soldiers massing with a tank, “Nigeria’s committed and patriotic troops in action to crush al Qaeda/Boko Haram terrorists of Sambisa to bring back our girls”.

In another tweet with amphibious soldiers crossing an unnamed river, Abati wrote that the soldiers were set to crush the terrorists and free the girls, who were taken over a month ago.

Although the President’s spokesman did not say where the soldiers were camped, it was learnt that the soldiers, who had been training with the specialists despatched by Britain and the United States of America in the wake of the abduction, have been gearing up for action to free the captives.

Both nations, which are Nigeria’s trading partners, have also sent in reconnaissance aircraft to help locate the abductees and reunite them with their parents.

They have also pledged to assist Nigeria in tackling rising terrorism in the country.

Meanwhile, President Jonathan has ordered immediate probe of the Sunday bomb blast that killed five persons in the Sabon Gari area of Kano.

The President handed down the order during a meeting with service chiefs in his office shortly after his arrival from France during which he held a security meeting with some heads of states.

Apart from summoning the security heads to a meeting to review the security situation in the country, Jonathan appealed to Nigerians to remain united against the Boko Haram, which he described as the al Qaeda of West Africa.

“President Jonathan calls on Nigerians to remain united against the al Qaeda of West Africa alias Boko Haram and all enemies of the state,” Abati said.

“The President has also ordered a thorough investigation into the Kano bomb blast and asked the security chiefs to act quickly,” the spokesman added.