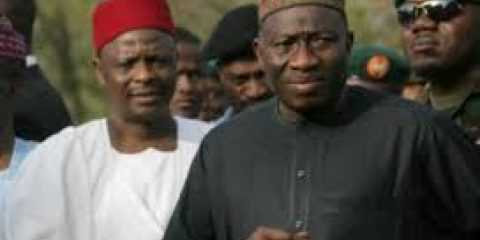 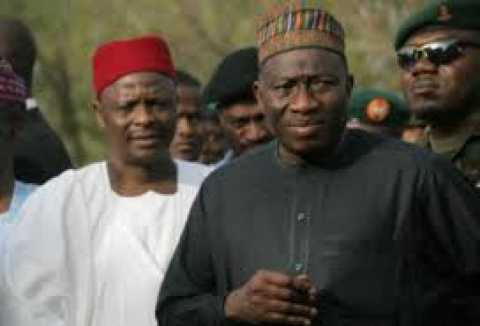 President Goodluck Jonathan yesterday challenged Governor Rabi’u Kwankwaso of Kano State to account for the N225 billion Local Government funds he received from the Federation Account within two years. Jonathan was in Kano to formally welcome the former governor of the state, Mallam Ibrahim Shekarau, who defected to the Peoples Democratic Party, PDP, recently. He visited the state, amidst threat from Kwankwaso that he was not welcomed to Kano. Kwankwaso and his cabinet boycotted the presidential visit. But the president used the opportunity to inform the people of the state that the governor had received over N225 billion as local government allocations, which did not get to the Interim Management Officers, IMOs, as the head of councils are known in the state. The President, addressing a PDP unity rally at Kano Polo Ground said the governor should be made to account for the money. He also denied that the governor voted for him in 2011. Kwankwaso had on the eve of the visit said he regretted voting for the President in 2011. Jonathan said: “We read in some of the newspapers that the Governor of Kano State, Kwankwaso, said he regretted voting for me. Let me tell my good people of Kano that Kwankwaso did not vote for me or Vice President Namadi Sambo whether in the primaries or the main election. “We have accommodated a lot, but we talk less. Those of you from Kano in PDP knew what happened that when we entered that Eagle Square; by the time the counting got up to halfway- when it was clear that I was to emerge as the candidate, Kwankwaso left the venue. “Even the little money my campaign office provided for refreshment and transportation for Kano delegates, Kwankwaso refused to give them that money. He did that so that the Kano delegates will be angry, so that they would not vote for me. “Even in the main election, the little money my campaign office sent to Kano State, Kwankwaso refused to release that money to anybody; now, how can Kwankwaso tell me that he voted for me?” He vowed that the PDP will recapture the state in 2015 as the mandate the governor was currently enjoying belongs to the ruling party. Governor Kwankwaso has however replied the president, describing him as insensitive. Kwankwaso, in his reply to President Jonathan’s attack, regretted that at a time Nigerians were mourning the death of 75 victims of the Nyanya bomb blast, the president decided to embark on what he described as “merrymaking trips.” In a press statement issued by Mallam Halilu Ibrahim Dantiye, Director of Press and Public Relations to the Kano State governor, Kwankwaso also accused the president of promoting corruption in the country. “At a time when several innocent lives have been lost, when many of the victims are in hospital seeking blood donations to survive, the president is gallivanting round the country in the name of PDP unity rally,” he said. He also wondered why President Jonathan would be travelling aimlessly with taxpayers’ money, while the common man is being killed daily because of the failure of the Federal Government to adequately protect lives and property. The governor also accused the President for justifying, promoting, and sustaining sleaze, noting that despite the corruption allegation against the former minister of aviation and the missing $20 billion petroleum funds, the president has remained silent. “The man came to Kano to smear our image but thank God, the man gave me free publicity by mentioning my name over 50 times in a 15 minute address. “The President, his Vice and the Secretary to the Government of the Federation are vultures. They want the PDP to die and feast on its carcass.