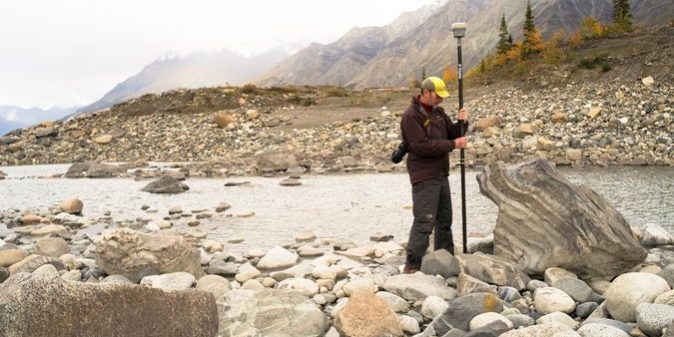 In the blink of a geological eye, climate change has helped reverse the flow of water melting from a glacier in Canada’s Yukon, a hijacking that scientists call “river piracy.”

This engaging term refers to one river capturing and diverting the flow of another. It occurred last spring at the Kaskawulsh Glacier, one of Canada’s largest, with a suddenness that startled scientists.

A process that would ordinarily take thousands of years — or more — happened in just a few months in 2016.

Much of the meltwater from the glacier normally flows to the north into the Bering Sea via the Slims and Yukon Rivers. A rapidly retreating and thinning glacier — accelerated by global warming — caused the water to redirect to the south, and into the Pacific Ocean.

Last year’s unusually warm spring produced melting waters that cut a canyon through the ice, diverting more water into the Alsek River, which flows to the south and on into Pacific, robbing the headwaters to the north.

The scientists concluded that the river theft “is likely to be permanent.”

Daniel Shugar, an assistant professor of geoscience at the University of Washington-Tacoma, and colleagues described the phenomenon in a paper published on Monday in the journal Nature Geoscience.

River piracy has been identified since the 19th century by geologists, and has generally been associated with events such as tectonic shifts and erosion occurring thousands or even millions of years ago. Those earlier episodes of glacial retreat left evidence of numerous abandoned river valleys, identified through the geological record.

In finding what appears to be the first example of river piracy observed in modern times, Professor Shugar and colleagues used more recent technology, including drones, to survey the landscape and monitor the changes in the water coursing away from the Kaskawulsh Glacier.

The phenomenon is unlikely to occur so dramatically elsewhere, Professor Shugar said in a telephone interview, because the glacier itself was forming a high point in the landscape and serving as a drainage divide for water to flow one way or another. As climate change causes more glaciers to melt, however, he said “we may see differences in the river networks and where rivers decide to go.”

Changes in the flow of rivers can have enormous consequences for the landscape and ecosystems of the affected areas, as well as water supplies. When the shift abruptly reduced water levels in Kluane Lake, the Canadian Broadcasting Corporation reported, it left docks for lakeside vacation cabins — which can be reached only by water — high and dry.

The riverbed of the Slims River basin, now nearly dry, experienced frequent and extensive afternoon dust storms through the spring and summer of last year, the paper stated.