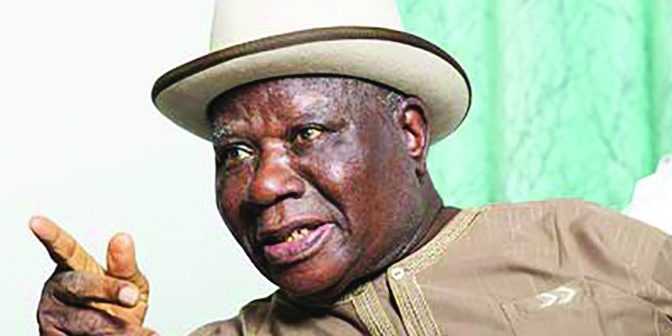 Leader of the South- South delegates to the ongoing National Conference, Chief Edwin Clark, yesterday, dissociated the region  from a document insisting on self determination,total resource control  for the oil-rich area.

He said the zone did not know the source of the document and it did not represent the stand of leaders and residents of the area.

A 51-page magazine with a bold inscription ‘Niger Delta…On Resource Ownership We Stand’, was circulated among the delegates at the entrance of the hall of the conference shortly before the commencement of yesterday’s plenary.

Among other things, the magazine ,published by the Niger Delta Self Determination Movement (NDSDM) stated: “On hundred percent resource ownership we stand or self determination shall be our only option.

“Therefore, anyone who styles him/herself in any capacity to arrogate such powers to deny the Niger Delta people her stands, remains an aggressor as we shall not shift grounds on these positions, hence, we call on all Southern delegates to the national conference to remain resilient and resolute on our mandate and positions”.

Clark, while disowning the views expressed in the magazine, told the conference that the South-South was committed to the unity of Nigeria.

The elder statesman, who had to halt a debate on the report of the transport committee, recalled that it was the intervention of the South-South in 1966 that helped to unify the country, which he said, was facing some challenges.

He said: “In 1966, the country was at crossroads . We had a conference like this,  and it was the intervention of delegates from the Niger Delta that saved the country from disintegration.

“This conference is called to reform and transform our country. We are not in support of anything that would threaten the peace and unity of the country. All we have been asking for, is justice and fairplay for every citizen and section of the country.”

He pledged that South- South delegates would investigate the source of the magazine even as he enjoined all delegates to promote the unity and peace of the country in their utterances.

Earlier, former governor of Akwa Ibom state Obong Victor Attah, stated that he saw the magazine for the first time yesterday, stressing that he had no idea about the source of the magazine.

A committee headed by Attah had recommended that mining and control of mineral resources should remain in the exclusive list . It however recommended that the states should be involved in the initiation and mining processes by the Federal Government. The recommendations were yet to be debated and adopted by the conference.

Reacting to Clark’s submission Isa Aremu commended the elder statesman and canvassed restriction of some documents that were circulated and distributed among the delegates .

His suggestion was however opposed by some delegates who argued that such measure was tantamount to censorship.