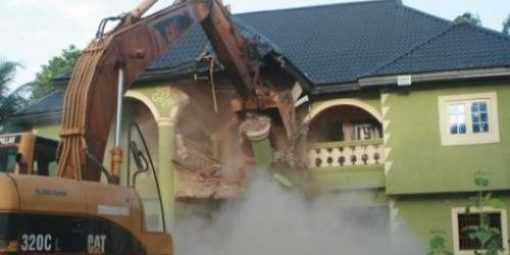 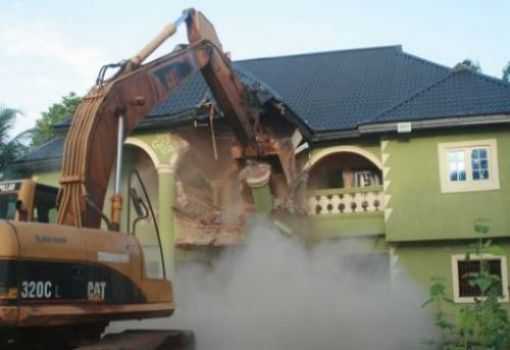 Governor Willie Obiano in his bid to rid the state of criminals has already revoked the certificates of occupancy of the four buildings.

The church and two of the other buildings are said to belong to Pastor Ifeanyi Nwaezeagu, General Overseer of Unchangeable God Ministries, Awkuzu. The other two buildings were located at Dusogu and Ifite villages, both in Awkuzu.

Leading the demolition exercise were the Deputy Commissioner of Police in charge of Operations, Mr. Olafimihan Adeoye; Special Adviser to the Governor on Security, Chief Chikaodi Anara; Officer in Charge of SARS in Anambra State, Mr. James Nwafor; and the Command PPRO, Mr. Emeka Chukwuemeka.

According to DCP Adeoye, Pastor Nwaezeagu had generated millions of naira from his kidnap dealings and was involved in the kidnap of many wealthy Anambra men, including a priest.

He declared Ifeanyi Nwaezeagu a fake pastor who was engaging in kidnapping unnoticed until he was caught in 2013.

“His confessional statements led to the unraveling of his gang before Governor Obiano revoked his C of O, leading to demolition of his church and buildings,” DCP Adeoye said, adding:

“One of his houses was marked Ozo Igbo Ndu (Igbo Life Saver) suspected to be his shrine, while the church was marked ‘Unchangeable God’, with some Bible quotations marked on it,” the DCP added.

The demolition came as the Anambra State Police command paraded 15 suspected kidnappers and armed robbers who were caught with sophisticated arms and ammunition at the Special Anti-Robbery Squad (SARS) headquarters, Awkuzu.

Speaking with News Express, an indigene of the area, Mr. Chukwuchebe Nweke, said Pastor Nwaezeagu started his church in 1999, adding that they never knew he was into kidnapping and armed robbery until lately when the police invaded his home and the church.

Weapons displayed by the police during the parade of 15 suspects include one Rocket launcher, one Rocket, 50 magazines for AK 47, 300 rounds of 7.62 mm life ammunition, among others.

Addressing newsmen at Awkuzu, the PPRO said ten of the suspects were kidnappers, while five were armed robbers and car snatching syndicate using fake number plates.

He explained that the police have been diligent and applying due process in investigating matters and smoking out kidnapers and robbers who have been terrorising the state.

Two of the suspects, a dismissed Army officer, one Prince Ndubuisi Friday and Ifeanyichuukwu Onuchukwu confessed to the crime.

Also, another suspect, Oliver Ifeanyi, confirmed that he received a snatched car even though he claimed that he did not know that it was stolen car.