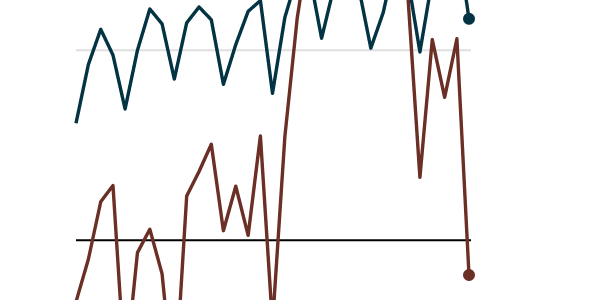 SHANGHAI — China’s economy grew at a healthy pace in the first three months of this year, propelled by strong household spending and heavy government investment in infrastructure.

It was also helped — albeit much more modestly — by a factor that could exacerbate the country’s tense relations with Washington: China is selling a lot more to the United States, and its purchases from America aren’t keeping up.

China’s National Bureau of Statistics announced in Beijing on Tuesday morning that the economy had expanded 6.8 percent in the first quarter compared with the same quarter last year. That was well ahead of the pace necessary to hit the government’s target of 6.5 percent growth for the entire year.

The country’s quarterly growth figure has become so implausibly smooth and predictable in recent years that economists generally look for other ways to gauge China’s economic health. One of those is trade, which at one time was a major driver of Chinese growth, though over the last decade it has been far eclipsed in importance by Chinese investment and household spending.

The latest figures show exports to the United States are growing considerably faster than China’s purchases of American goods. That could provoke more ire from President Trump, who had threatened to impose $150 billion in tariffs on Chinese products.

The trade figures present a mixed picture of how painful those tariffs could be for China. Over all, trade is not as important to China’s economy as it was a decade ago, suggesting the country could better weather a trade fight. But the data also suggests China’s exports to the United States, specifically, have become more valuable to China’s economy as it increasingly makes most — or even all — of the parts that go inside what it sells abroad.

Sizing Up the Surplus

Mr. Trump has focused on China’s trade surplus with the United States, or the difference between what it sells to America and what it buys. And in the first three months of the year, the trade surplus for goods hit a new high of $58 billion, according to Chinese data. Trade in services, in which the United States is stronger, is tiny compared with the trade in goods, and offsets only about a tenth of the deficit in goods.

Depending which country you ask, China’s surplus on goods with the United States last year totaled $375 billion, according to Washington, or $276 billion, according to Beijing. The two countries use different methods to account for Chinese exports that pass through Hong Kong, a Chinese city that operates under its own laws. But either way, China’s surplus has been rising.

Strictly by the numbers, China’s trade surplus with the United States helps Chinese economic growth figures, though the reality of the relationship between the countries is more complex. Many American consumers and companies benefit from Chinese-made goods, and a number of economists doubt that Mr. Trump’s focus on lowering the trade surplus with a single country will help the United States.

On their face, the numbers suggest that American businesses have become dependent on China. And in fact, China’s trade surplus with the United States is growing even as its surplus with the rest of the world has shrunk.

But something else is going on: China is depending more on itself.

China was once famous for assembling goods made from parts that had been bought elsewhere. A smartphone that is made in China, for example, might have a screen from Japan, memory chips from South Korea and a main processor from the United States. In fact, those parts and components long accounted for a sizable chunk of what China bought from the United States.

Today, China can do all that entirely within its own borders, making everything from advanced electronic components to car parts and assembling the final product.

“In the last 10 years, you’ve seen China become considerably more developed and sophisticated in terms of its own supply chains,” said Gordon Styles, the founder and president of Star Rapid, a company in Zhongshan, China, that does rapid prototypes and low-volume test manufacturing runs for everything from auto parts to medical equipment.

“It is now easier than it ever was before to produce the entire product here,” he said.

Global automakers and other multinational companies have moved much of their supply chains to China to avoid Chinese tariffs, tap the country’s vast work force and move closer to a big new market.

Brad Setser, a Council on Foreign Relations economist, calculated that imports of manufactured goods from the United States are becoming steadily less important to the Chinese economy. He estimated that China now produces within its borders up to four-fifths of the value of each dollar of exports. That share had been around two-thirds in 2011.

Nadim Ahmad, the head of the trade and competitiveness statistics division at the O.E.C.D., said that China has been expanding in areas like research, design and development that had previously been done overseas. “You’re basically creating a lot more in the economy” as goods are manufactured, he said.

That means China gets more bang from its buck from its exports to the United States — and suggests American tariffs could be more painful than trade’s shrinking share of the economy suggests.