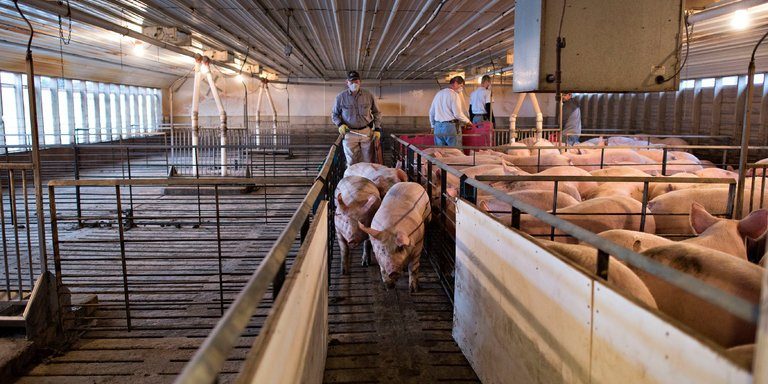 The Chinese government hit back Monday at President Trump’s tariffs on steel and aluminum by acting on a threat to put tariffs as high as 25 percent on imports of 128 American-made products, including pork and seamless steel pipes.

The Chinese Ministry of Commerce indicated that the tariffs, which it first publicly suggested almost two weeks ago, were intended to pressure the Trump administration to back down from a simmering trade war. In addition to imposing additional tariffs on steel and aluminum from China and other countries, President Trump has threatened to put protective duties on other Chinese-made products worth $60 billion.

“We hope that the United States will rescind its measures that violate World Trade Organization rules as quickly as possible,” the ministry said in an online statement about China’s retaliatory tariffs. “China and the United States are the world’s two biggest economies, and cooperation is the only correct choice. Both sides should use dialogue and consultation to resolve their mutual concerns.”

The Chinese retaliation was no surprise. But Beijing appeared to go a step beyond its initial threat last month to counter the United States’ tariffs on steel and aluminum.

The Ministry of Commerce said then that it could impose tariffs in two stages: first, a 15 percent duty on 120 products, including fruit and wine, and then, after further assessing the impact of the United States’ tariffs, a 25 percent tariff on eight other products, including pork, an important moneymaker, especially in farming regions in states that voted for Mr. Trump.

But the latest announcement said the tariffs that will take effect on Monday covered all 128 products, including the 25 percent charge on pork.

The ministry said it had Chinese public opinion on its side after asking for views about the trade measures. Over recent weeks, China’s state-run news media has condemned the Trump administration’s protectionist steps and presented China as the innocent defender of open trade. In fact, China imposes relatively high barriers on many imports and on foreign investment in many sectors.

“Many members of the public voiced their support for the measures and the product list through telephone calls, emails and other means,” the ministry said. “After an assessment, it was decided to implement the measures described on 128 products imported from the United States.”

Mr. Trump’s threatened tariffs on $60 billion worth of other Chinese-made products are likely to prompt more retaliation from China, which could single out more valuable American exports such as soybeans and hurt Apple and other companies that rely heavily on Chinese consumers.

Liu He, a Chinese vice premier and economic adviser to President Xi Jinping, told Steven Mnuchin, the American treasury secretary, in a phone call just more than a week ago that the two countries should “stay rational and work together to maintain the overall stability of their economic and trade relations.”

But Senator Elizabeth Warren, Democrat of Massachusetts, who has been visiting Beijing, said on Saturday that Chinese officials she met, including Mr. Liu, “have not deviated from their talking points” about the Trump administration’s tariffs.

“America is waking up to the loss of its technological advantage through China’s restrictions on access to its internal markets,” she told reporters. “That is now a place where policy is beginning to change.”