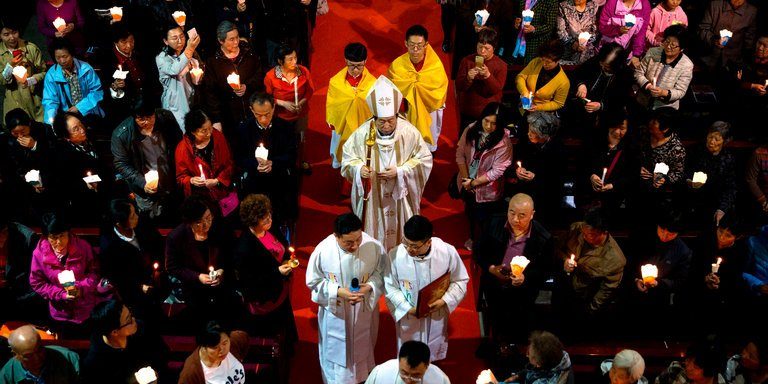 BEIJING — China will not allow any foreign interference in religious affairs in the country, a senior official said on Tuesday, dousing expectations of an imminent deal with the Vatican over control of the Roman Catholic Church here.

“I think there is no religion in human society that is above the state,” the official, Chen Zongrong, said during a briefing on religious affairs in China, underscoring the government’s intention to maintain strict control over all religious organizations and their believers.

Mr. Chen’s remarks came amid reports that the Vatican was prepared to make concessions to Beijing in the appointment of the church’s bishops — including by asking two “underground” bishops to step aside — in exchange for retaining some influence over those who are chosen in the future.

The prospect of a breakthrough after decades of dispute between China’s Communist leaders and a succession of popes has raised hopes but also stirred unusual public criticism of the Vatican. Some Catholic leaders have warned that concessions to Beijing could betray those who have faced pressure and even persecution by worshiping in the so-called underground church here.

Pope Francis has sent officials to Beijing to negotiate an agreement, but a Vatican spokesman last week disputed reports that one was imminent.

One of the Vatican-ordained bishops at the center of the proposed deal, Guo Xijin, was detained by the authorities last week ahead of Easter and forced to leave his parish in Fujian Province, though he was allowed to return in time for the holiday. In an interview with The New York Times last month, Bishop Guo said he would step aside if the Vatican asked, but he warned that the government could effectively sever ties between Chinese Catholics and Rome.

Mr. Chen denied that Bishop Guo had been detained, saying that a Beijing-appointed bishop in a neighboring region, Xiamen, had simply invited him to visit during Holy Week. “So to say that his freedom is limited is not consistent with the facts,” he said.

The Vatican and China broke off diplomatic relations in 1951, two years after the Communist takeover of the country.

China allows Catholic churches to function here — one of which, St. Joseph’s Wangfujing Church, or Dongtang Cathedral, in Beijing, was overflowing on Easter Sunday — but the Vatican does not recognize the seven bishops who have been appointed by the authorities. Instead it has secretly named leaders like Bishop Guo to oversee “underground” followers.

Mr. Chen, introducing a government white paper on religious rights and practices, said that as a matter of policy there were “no underground churches or house churches” in China. The country has seen a broad religious revival since the repression wrought by the Cultural Revolution in the 1960s and 1970s, but the government has recently tightened its controls over many aspects of faith, including finances and properties.

According to the white paper, China has 200 million believers among the five major religions, which it counts as Buddhism, Taoism, Islam, Catholicism and Protestant Christianity. Catholics account for six million of them, the paper said, though that does not include those in the “underground” church. By other estimates, the number of Catholics exceeds 12 million.

“Religion must adapt to the society it is in,” said Mr. Chen, whose department, the State Administration for Religious Affairs, is being absorbed into a branch of the Communist Party as part of a sweeping government reorganization. He went on, “If a religion is incompatible with its society, this religion cannot survive and develop.”