Chief Uwazuruike, Al-Mustapha, Fasehun , Asari-Dokubo and others sue for unity 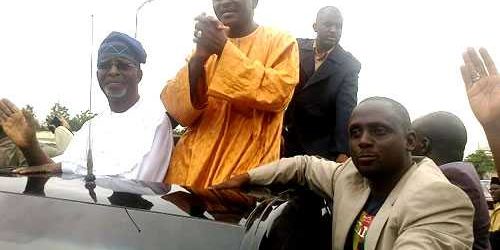 Leaders of different associations, youth bodies and movements across the six geopolitical zones stormed Owerri, the Imo State capital yesterday to chart a new course that will promote peace, harmony and progress in the country.

The delegation of various associations led by teh former Chief Security Officer, CSO, to the late General Sani Abacha, Hamza Al-Mustapha, arrived at the Sam Mbakwe Airport at about 10.00 am where they were received by the leader of the Movement for the Actualization of Sovereign State of Biafra, MASSOB, Chief Ralph Uwazuruike.

Mustapha, who was accompanied by the leader of the Niger Delta People’s Volunteer Force, NDPVF, Alhaji Mujaheed Asari-Dokubo, founder of the Oodua People’s Congress, OPC, Dr. Fredrick Fasehun, Mohammed Abacha, son of late Sanni Abacha and the President of Arewa Consultative Youths, Yerima Shetima, could not grant journalists interview at the airport.

But Asari-Dokubo said the visitors were in Imo State to deliberate on the challenges confronting the country and to proffer solutions to the problems facing the people.

However, speaking later at the palace of Eze Nri, Eze Obidiegwu Onyesoh, in Nri, Anaocha Local Government Area of Anambra State, Al- Mustapha, who led the delegation said; “We understand at this point in time in the journey of our democracy, the need to throw a bridge that will create passages for our younger generation to criss-cross Nigeria in peace, unity and harmony.

Earlier in his speech, the monarch commended Al- Mustapha and other members of the delegation for teaming up to advance the course of peace, unity and harmony in the country.

He advised them to employ dialogue in the pursuit of their objective; “You should emulate the MASSOB leader in his non-violent agitation and work for the unity of the country.

“Nri is the cradle of Igbo culture and we the Igbo are known for our culture of forgiveness and tolerance, which is what the country needs at this moment.” Also while visiting the Biafran war veterans at Okwe in Onuimo Local Government Area of Imo State, Al- Mustapha, who was received with a 21-gun salute, restated the need for forgiveness and tolerance among all ethnic groups in the country.

The team also visited Anambra State and held a meeting over what should be done to strengthen Nigeria’s unity. Once they arrived in Anambra State, the group stormed the palace of the traditional ruler of the kingdom, His Majesty Eze Obidiegwu Onyesoh (Nrienwelana 11) in Anaocha Local Government Area