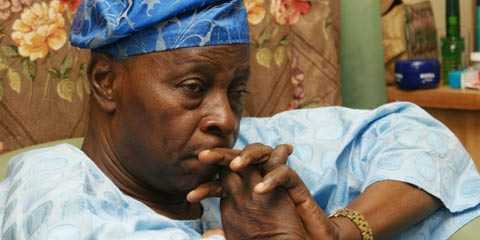 CHIEF Samuel Olu Falae is a former Secretary to the Federal Government and also the joint presidential candidate of the All People’s Party, APP and the Alliance for Democracy, AD in 1999.

In this exclusive interview with Vanguard, Falae expresses his concern about the national conference and at the same time, faults the number of delegates going for the dialogue saying it is too small. He also bares his mind on the resuscitation of the Social Democratic Party among sundry issues. Excerpts:

What is your reaction to the decision by opponents of the National Conference to stop it in court?

This is a democratic society, every citizen is free to go to the law court if he or she feels that his or her rights are being threatened. The other way of looking at it is that everybody ought to know that the Nigerian federation is not at ease and that all is not well with our federation.

Therefore something must be done so that all of us can feel happier in this country. A dialogue or a conference to discuss issues is a well known way out of that kind of dilemma and therefore, I expect every well meaning Nigerian to welcome the opportunity to discuss these issues with a view to resolving them and ensuring that Nigerians are happier people, more satisfied and more contented.
Ethnic nationalities

Therefore, if you take that second view, you will then wonder why should anybody go to court to stop Nigeria from becoming a better country. So, those are the two ways of looking at it but I believe the judiciary will handle the matter and I believe the conference will go on.

There are 774 local government areas in the country and my hypothesis is that it is most unlikely that you can have a local government in Nigeria where you have more than three ethnic nationalities. If you think that is a reasonable hypothesis, then, you can say that a national conference of three delegates multiplied by 774, which will enable everybody to be accommodated. The question is that, is it too large for a population of 160 million people?’ It means that one delegate will represent almost 100,000 people which means that the answer is no. Do we have a hall that can take us, the answer is yes.

The International Conference Centre in Abuja is designed to sit 3000 people and so, we have a method of ensuring everybody is there and there is a reason why everybody should be there because the decisions to be taken are so fundamental that nobody should be excluded.

So, if you are going to have a conference that will make a new constitution, every ethnic group must be there. Therefore, my position is that every ethnic nationality should be at the conference because it is our collective future that is going to be determined.

Why should some people be there while others are not there?

That is 90 delegates out of 490 to the owners of Nigeria, that is hopelessly inadequate and that is why some ethnic groups are now left out because they don’t have enough slots for them.

That is the truth if the matter. The number is a recipe for bad blood, for quarrel and for anger.

But some have argued that the number of Federal government nominees for the conference is too much. Do you think so?

No, my position is that the total size for the conference is too small. That is where the problems comes from. That is why I proposed a conference of 2262 to accommodate the ethnic groups. Everybody must have a chance to speak out. You see, we have been running Nigeria as a big prison and as long as that continues, so many will want to move out of the prison.

Do you think Nigeria’s unity is negotiable?

Another concern that has been raised is that the composition of delegates should have been more of the younger generation. What is your view on it?

My view is that the conference should reflect the reality of the Nigerian society. When you want to go to a place like that, you will want to send the people who have the best education, the best experience, the best exposure, contact and outreach so that your interest can be maximally canvassed.

That is why you have the majority being older people. That is what has happened, everybody wants to send his first eleven and how do you know your best eleven, people who have played for you in a long time and who have not failed. People who are known to have integrity over time.

They want to send tested people who can canvass their course and win for them. That is what has informed the preponderance of more matured people in the conference. That is my own rationalization.

But the Afenifere Renewal Group has come up to say that delegates’ list for the south west does not represent their first 11?

Well, everybody has his own opinion. But what are the criteria for deciding? It is a matter of opinion but all I can say is that the list I see and not just the Yoruba list, contains a good number of people who are credible, who have been successful in their chosen careers, who are regarded as honest and credible people.

That is what is at stake. We cannot say the list is the best that we can produce.

As an elder statesman, what are your concerns for the confab?

I have concern for everything. Nigeria should not be where it is today. We have been independent for more than 50 years. If we had solved the problem of infrastructure, today we would have first class roads linking Nigeria.

We should have established power generation, our educational system should be improving and not degenerating but that is a very sad thing because in our time, graduates from Nigeria were in high demand in schools overseas.

The best universities in the world were fighting for Nigerian graduates at that time but today, you have a first class from Nigeria who goes abroad but they will ask him to go and take their own exams to show that you deserve to be a graduate.

That tells you a story about the huge decline in the quality of education because education determines the future. Our education has declined.

We are not where we are supposed to be and that is why I am very concerned. How do we turn this thing round? How do we begin to raise the standard of education? We have no plan and that is one of the greatest tragedies that is happening now.

(Cuts in) Boko Haram has now proved to everybody what I always knew it was. It was not a group of religious people, who could be talked to. I have always thought that they were a group of evil people, devil incarnate who are in the world to maximize murder and mayhem.

They now go to murder children in their beds in schools and throw bombs into dormitories, behead and shoot them. These are evil people. The government has now recognised that the only way you can deal with them is through force.They have now realized that it is now war.

What informed your decision to resuscitate the Social Democratic Party, SDP?

It is very obvious. Where are the parties in Nigeria that I can join? What are the ideologies of these parties? You are in PDP today, tomorrow, you are in the APC, there is no ideology. Ideology is what captures what you will, do for the people.

Ask some of the so called big politicians running around whether they have ever seen the manifesto of their party? They don’t even know whether one exists. So, when this nonsense is going on serious minded people must go for that which is principled and that is why we went and resuscitated the SDP.

We remembered what it did within its short span of life.These parties are not interested in the individual Nigerian.

Graduates have no jobs, there is no water, there is no light, there is nothing. We are going around in a circle. We cannot rely on any of those parties to do the job because they have failed woefully.