Chief Mbazulike Amaechi: Ndi Igbo can bring Nigeria to a halt if… 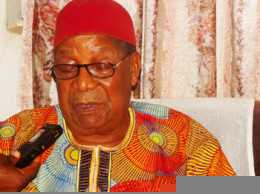 ELDER Statesman and First Republic Minister of Aviation, Chief Mbazulike Amaechi is the last man standing in Southern Nigeria among the generation of nationalists who fought for the nation’s independence. He is also the only surviving minister from the South that served in the first post-independence cabinet. The quartet in that cabinet still surviving are Shehu Shagari, Shettima Ali Mungono, Inuwa Wada and Maitama Sule all from the North.

Amaechi’s place in history nonetheless, he notes the chasm between the values of the founding fathers and the current generation of leaders who he asserts are engrossed in rapacious looting of the country’s common wealth. In this exclusive interview, Amaechi also raises issues with the place of Ndigbo in the nation’s history noting what he describes as a systematic policy of undermining the presence and place of the Igbo race in the polity. Excerpts:

HOW has life in the village been?
I was born in the village here and then in my early life, I was taken out of the village to pursue secondary and higher education, then the struggle for independence began. I later moved to the public service as a parliamentary secretary and later minister.

Nigerians expect that those of you that fought for the country’s Independence should be consultants of some sort. Are you recognized by those at helm of affairs?

Not at all. Governments in Nigeria now are by-products of the military junta that destroyed the country and destroyed the dreams of the founding fathers of this country and the subsequent regimes have inherited the hostility of the military. The governments are hostile to history and many of them don’t want to know about the history, particularly the political history of the country.

That is why in many places, the politicians who founded the country, particularly from our side of the country, that is, the Igbo side, are not given their due recognition. In places like the North or the West, the nationalists are being honoured. With a pointer to Anambra State in particular, it is either they are ignorant of the history or something else.
Then, again, in Nigeria , I am the only surviving nationalist or minister from the First Republic in the whole of Southern Nigeria. With the death of T.O.S Benson, some years ago, Dr. Majekodumi last year and M.T Mbu, I am the only surviving one in Southern Nigeria, East or West. There are four others in the North namely, Shehu Shagari, Shettima Ali Mungono, Inuwa Wada and Maitama Sule. Whenever I leave Anambra State to other states, they recognize me a lot, but here in the East, it is only the Abia State Governor that respects me a lot as well as the new Governor of Imo State.

Founding fathers
In the North, it’s something else. Anywhere I go there, they get excited that one of our founding fathers is around.

You talked about how the military destroyed this country. If they had approached you for advice as a nationalist, what would you have told them?

What kind of advice will you give to a criminal? Taking over the rulership of a country by force of arms is the highest form of armed robbery and as far as I am concerned, all military men that took over government either in Nigeria or elsewhere are people who are guilty of treason. They should be killed. They were all killed in Ghana and Ghana found peace.

When an armed robber snatches a hand bag from a lady, he is executed but when somebody takes over a whole government of a country, takes over the whole wealth of a country and plunders it, he is going about freely. The same thing they have transferred to their successors now. They are looting the country now in a legal way. For example, look at the earnings of the governors, the legislators and ministers. Some people appointed as ministers do not merit it while some do.

In our own time, you will have to have the mandate of the people, you have to win election, be a member of the parliament before you are appointed a minister. But today, any dropout can be appointed a minister and anybody who is a minister at Abuja for six months, you find him owning a house in Asokoro, Maitama or any other high brow area in Abuja. Where did they get the money from?

Dropouts looting the country
They are simply looting the country. The country is fabulously rich and blessed by God but thieves are stealing the country dry. The legislators who make all sorts of laws for themselves have basic salaries or take home allowances, both seen and unseen and go home with up to N10m a month. What do you call that? It’s stealing, they have legalized looting.

Check out the time of the nationalists and the founding fathers of this country, starting from Dr. Azikiwe to Okpara to Dennis Osadebey, to Nwafor Orizu, to Obafemi Awolowo, to Saudauna of Sokoto. Did you find any chain of buildings that they sprawled all over the place?

The same for people like us that were ministers. I was a minister for six years, yet I did not build a house in Lagos which was the capital of the country then. For example, when Dr. Okpara wanted to come back, his wife cried out and myself, the late C.C Onoh, Dr. Walter Eze, Dr. G.C. Mbanugo, we raised money and went and completed a building for him at Umuahia.

This was somebody who was a minister for about eight years and Premier of Eastern Region for six years. He did not build a house but now, even special assistants or advisers build mansions, own private jets and all that. What kind of country is that?

You operated a parliamentary system of government. Do you suggest that we go back to that system?

I don’t think it is the system, it is the people. Any system that runs through democracy is right. The fault is not in the system but in the people operating the system.

As a former minister of the Federal Republic of Nigeria, are you receiving pensions or any form of stipend?

No, nothing. They don’t even invite us to drink fanta at the Independence celebrations. The other day they celebrated 50 years of independence; they did not invite the nationalists. I have never had any invitation from them.

Another election is underway, what do you make of the struggle for power?
I don’t know. I don’t vote. I am talking about the clamour for power shift in the country. Ideally, the proper thing in a society is for the people to elect somebody of their choice to rule them. It does not matter whether he comes from the East, West, North or South. It doesn’t matter the religion he professes. If he is an honest man, capable and has something to offer as well good leadership, then why not? But ideally, Nigeria is not an ideal place because there is so much ethnic and religious influences in our public places.

Therefore, it becomes necessary that certain areas should not be marginalized. A good leader should give leadership to all. For example, look at the case of Nigeria, Igbos, because they fought a civil war, have been mapped out for marginalization and reduction to a second or third class status in a country they were part of the founders. There is no ethnic group in Nigeria that produced more nationalists and founding fathers like the Igbo land.

No other section of Nigeria contributed more than the Igbos to the founding of this country, yet since after the civil war, since after the first Republic, the Igbos have been relegated to the status of sub citizenship in their own country. They are neglected in development plans, look at our roads, look at the second Niger Bridge that we have been talking about, old bridge that the Balewa government built in 1965 to 1966 is aging and being over loaded.

We have been crying and they said the contract has been awarded and it is contractor financed in which they say the contractor should organize a toll and collect the money. It is only here they are doing it. It is only in this part of the country that electricity is locked off. There were two powerful power stations in Igbo land but after the civil war, the Gowon government decided that electricity should not be generated in Igbo land again and so they closed the Oji River power generating station in Enugu which was utilizing coal.

Succeeding generation
Then the Afam power station which was in Aba division, they transferred the town to Rivers State so that it will not be in Igbo land because of the government policy that there should not be any power generating point in Igbo land, all because of the civil war. Afam power station was useful to Biafra. Then the Igbo politicians themselves, that is the succeeding generation of politicians from Igbo land cannot even come and sit down and plan on how they can save themselves, how they can go back again to belong to Nigeria because there is no ethnic group in Nigeria that is superior to the Igbos.

They are always there, as wine tappers, vulcanisers, traders and all that but the political leaders of this era have not learnt to galvanize and mobilize them. Ndi Igbo, if they decide to bring this country to a halt for 24 hours, they can do that. If we say, let every Igbo man close his shop, let every Igbo transporter take his vehicles off the road, let every Igbo teacher withdraw from the classroom, this country will come to a halt.

Why then do you think the Igbos do not maximize their power in the Nigerian project?
Because the political atmosphere is dominated more by opportunists and careerists than thinking people and once an Igbo man finds himself in a comfortable position, he wants to enjoy that position to the fullest. They are not thinking of tomorrow.

National conference
Alright, Nigeria at a national conference some seven years ago decided that Igbo land has been cheated amongst all the geo- political zones, that all the geo-political zones in the country have minimum of six states and that it is only Igbo land that has five states. So they passed a resolution that there should be one more state in Igbo land. Now, it has been impossible for the present generation of politicians to agree on one state.

They are demanding Urashi State, Adada State, Egbema, all sorts of things. We tried to use the Ohaneze and the governors to get them together, but it has not happened. In our own time, it won’t happen. If such challenge is thrown to us, over night, the leaders will meet and say this is what is going to happen and it stays and it ends there.