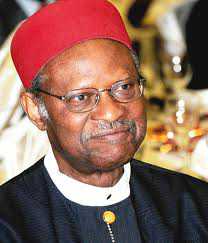 Anyanko spoke at a lecture organised by the Torchbearer Society at the Archbishop Vining Memorial Church Cathedral, Ikeja, stressed the need to return the country to regional government.

The topic of the lecture was: God In My Life.

He said: “Our leaders have largely been responsible for the problems facing the country, by not embracing the call to foster true federalism, which should become a federation of six units, with each unit developing at its pace.”

Anyaoku said the present structure, which divides Nigeria into 36 states and the Federal Capital Territory (FCT), is too expensive to maintain.

“Honestly, the resources at the disposal of the country will be overstretched in view of the fact that we have 36 states’ assemblies, 36 Judiciary, 36 police formations across the country, among others,” he said.

The former Commonwealth Secretary-General explained that when Nigeria practised true federalism in the 1960s, the country witnessed remarkable progress.

He said: “That was the period people like Chief Obafemi Awolowo gave us commerce and industry in the West; Sadauna of Sokoto developed the North with the money realised from groundnuts. The competition really assisted Nigeria to grow.”

Reflecting on where the problems of the country started, Anyaoku noted that the first military coup in 1966, put a wedge in the progress the country was making.

The subsequent military leaders, who took over governance, plundered the wealth of the country with impunity, Anyaoku said.

He added: “The origin of corruption in Nigeria started with the first military coup, which began the age of impunity; corruption thrives under successive military leadership that held the country down. Since then, the situation has not changed, as corruption has permeated all our national life with parents buying examination answers for their children.”

Explaining his role in fostering democracy in Africa, the former Commonwealth Secretary-General said he was instrumental to some multi-party democracies in several African countries.

Anyaoku said: “I approached many Heads of State and sold the idea of multi-party democracy. Some of them initially did not buy it, but having made them see the benefits of such exercise, they agreed.

“When I approached Kenneth Kauda of Zambia, he said the country would only embrace the idea, if the referendum supported it. This was done. In the election that later took place, the opposition, led by Federick Chiluba, won.”

He explained that his efforts in the current democratic dispensation in Nigeria took him several diplomatic moves.

Anyaoku said when the late General Sani Abacha staged a coup and the late Moshood Abiola was kept in detention, he persuaded the Head of State to return the mandate to Abiola, but the man was unyielding.