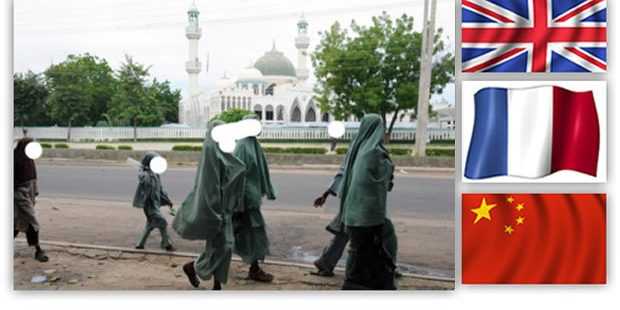 As pressure mounts on the Federal Government to rescue over 200 students abducted from Government Girls Secondary School, Chibok, Borno State, the United Kingdom, France and China yesterday promised to join the search effort.

This is even as the Nigeria Police Force announced a cash reward of N50m to anyone who volunteers credible information that will lead to the location and rescue of the female students.

The UK is to send a small team of experts to help in the rescue effort.

Cameron said the whole world had been appalled by what had happened and the UK “stood ready” to help as needed.

It was learnt that the experts would provide planning and advice on coordination.

They were not expected to be involved directly in the search through the jungle for the missing school girls, Cameron said.

The UK said that the team would be on the ground within days, although final details on the number and composition of the team were still being drawn up in consultation with the US and the Federal Government.

“The prime minister reiterated the UK’s offer of assistance to the Nigerian authorities,” a Downing Street spokesman said.

“President Jonathan accepted the prime minister’s offer to send a small team of experts drawn from across Whitehall departments to complement the US team committed by President Obama.”

The personnel are expected to come from the Ministry of Defence, the Foreign Office and the Department for International Development, among others.

The UK, one of the largest foreign donors to Nigeria, already has a small military training team and counter-terrorism experts stationed there.

Speaking in the UK Parliament yesterday, Cameron said the threat from Islamic extremists “opposed to education, progress and equality” was global and they needed to be confronted “wherever they are.”

“This is an act of pure evil,” he told MPs. “It has united people across the planet to stand with Nigeria to help find these children and return them to their parents.”

With more than 4,000 troops operating between Mali to the West and Central African Republic to the East, Paris has a major interest in preventing Nigeria’s security situation from deteriorating, having previously voiced concerns that Boko Haram could spread further North into the Sahel.

“The President has instructed … to put the (intelligence) services at the disposal of Nigeria and neighbouring countries,” Foreign Minister Laurent Fabius told lawmakers.

“This morning he asked us to contact the Nigerian president to tell him that a specialised unit with all the means we have in the region was at the disposal of Nigeria to help find and recover these young girls.

“In the face of such ignominy, France must react. This crime cannot be left unpunished,” Fabius said.

A French diplomatic source said Paris had an existing military and intelligence cooperation with Nigeria, but that it was offering an additional “specialised team” from the external DGSE intelligence service.

“The Nigerian authorities have to get back to us and tell us exactly what their needs are,” the source said, adding Fabius was due to speak to his Nigerian counterpart later yesterday.

China has also offered to assist in the fight against terror, particularly in the effort to rescue the schoolgirls.

President Jonathan disclosed this yesterday during a joint press conference with Chinese Premier Li Keqiang at the end of bilateral talks at the Presidential Villa.

Jonathan also disclosed that they agreed to deepen cooperation in the field of defence and security and strengthen cooperation in counter-terrorism, anti- piracy and combating organised crimes.

He said that the Chinese Government also expressed firm support to efforts at safeguarding the sovereignty and securing the territorial integrity of Nigeria as well as promoting economic development.

Speaking earlier, the Chinese Premier said China would work with Nigeria to ensure a quality and safety of mutual exchange and export.

According to him, the two countries also agreed to strengthen bilateral cooperation in the fields of infrastructure, financial services, trade and investment, agriculture, air services, aerospace and people to people exchange.

The Nigeria Police Force yesterday announced a cash reward of N50m to anyone who volunteers credible information on the abducted girls.

In a statement issued yesterday in Abuja and made available to National Mirror, Force Public Relations Officer, Frank Mba, urged all patriotic citizens with such useful information to contact the police.

While calling on the general public to be part of the solution to the present security challenge, the police high command also reassured Nigerians that any information given would be treated “anonymously and with utmost confidentiality.”

And concerned about the fate of students in the country following the abduction, the Nigerian business community yesterday approved $10m (about N1.65bn) to their Safe School initiative in Nigeria.

Addressing journalists at the ongoing World Economic Forum on Africa, WEFA, on the Safe School initiative in Abuja yesterday, former British Prime Minister and current UN envoy on Education, Mr. Gordon Brown, noted that there was a desperate need to assure Nigerians that “school children are safe to go to school.”

Consequently, the Nigerian business community has earmarked $10m with a pilot of 500 schools, mainly from the troubled states in the North, for the take off of the education initiative.

According to him, part of the components of the initiative is that the promoters would want parents and teachers to come up with safety measures they needed to ensure safety of school pupils and that government should also be involved.

With the Nigerian business community’s commitment to the project, the former British leader hoped that other international bodies would join the group through funding support to realise the objectives.

Brown pointed out that with more than 10 million Nigerian children in school, the primary target or pillar of the Safe School initiative would be to get the kidnapped children back safely and reassure Nigerians that schools were safe.

The UN envoy added that the UK and US governments had assured him that they would provide teams to locate the children and defeat the terrorists while President Jonathan had expressed his endorsement of the intervention.

He disclosed that the first step of the foreign assistance would be to support the Nigerian government to get the abducted Chibok girls back and assure parents and children that schools would be safe.

The Publisher of ThisDay newspaper titles, Mr. Nduka Obaigbena, said the Nigerian business community was jolted by the abduction of the innocent children which, he described, as a reflection of the threat to education in Nigeria.

He warned that greater danger remained the fear of children going to school which could make the country lose a generation of children who might refuse to go to school for fear due to insecurity.

Obama confirmed that the Federal Government had accepted a US offer to deploy experts to the country, saying “we’ve already sent in a team to Nigeria,” consisting of “military, law enforcement, and other agencies.”

But “this may be the event that helps to mobilise the entire international community to finally do something against this horrendous organisation that’s perpetrated such a terrible crime,” he said.

The American team will work to “identify where in fact these girls might be and provide them help,” the US president said, denouncing Boko Haram as “one of the worst regional or local terrorist organisations.”

US officials have voiced fears that the girls, aged between 16 and 18, have already been smuggled into neighbouring countries, such as Chad and Cameroun.

US Secretary of State John Kerry said on Tuesday he had offered US help in a phone call to President Jonathan.

Washington will also set up a coordination cell at its embassy in Abuja with US military personnel, law enforcement officials as well as experts in hostage situations.

“President Jonathan was very happy to receive this offer and ready to move on it immediately,” Kerry told reporters, after talks with EU foreign policy Chief Catherine Ashton.

US lawmakers have called on the Obama administration to do all it can to help free the girls.

The Nigerian government had “been disastrously slow in responding to incidents like the kidnapping of these girls,” said US Democratic Senate Majority Leader, Harry Reid.

A father and grandfather, Reid said: “I can’t imagine the horror of having my precious girls abducted.

“But for hundreds of families in Nigeria, my nightmare is their reality.”

He was speaking as the Senate approved a resolution condemning Boko Haram.

The EU’s Ashton said the girls’ kidnapping was “devastating for all of us.”

“These are the future of the country. They are teachers, dancers, politicians. They are scientists, they are mothers, they are women in the making who have a right to play their full part in their society,” she said.

Meanwhile, Boko Haram leader, Sheik Abubakar Shekau, has come out to declare that the war he is waging is actually a war against Christians and Christianity in the country.

Despite what many Moslem religious leaders have been making Nigerians to believe that the insurgents are not fighting for Islam, Shekau has declared that what he is actually fighting for is to make Nigeria an Islamic country and that he and his group will kill all non- Moslems.

Shortly after he released a video claiming responsibility for the abduction of the female students of the Government Secondary School, Chibok, Borno State, Shekau released another video, declaring an outright war against Christians in the country.

He also boasted of being in league with the likes of Afghanistan, Mali, Yemen and Pakistan, whose life ambition is to make the whole world an Islamic country.

This is what Shekau said in the video he released:

“This is a war against Christians and democracy and their constitution; we have not started, we will be in Abuja, and in every state in Nigeria.

“This war is against Christians, I mean Christians, generally the infidels. Allah says we should finish them when we get them.

“I have no time with your trillion. I am working for Allah and will die for it. No one can stop me. You killed Mohammed Yusuf. Are you not saying he is even better than Shekau?

“Even if you kill me, other fighters will rise better than me; I am nothing and worthless before Allah who I am working for. You are sitting with Christians and saying we are one, saying there is no difference. We are not one with infidels.

“We are friends with Afghanistan, Mali, Yemen and Pakistan, and we are going to wipe out the Christians.

“Are Christians the people we should play with? It is either you are with us or you are with them, and when we see you, we will harvest your neck with knife.”