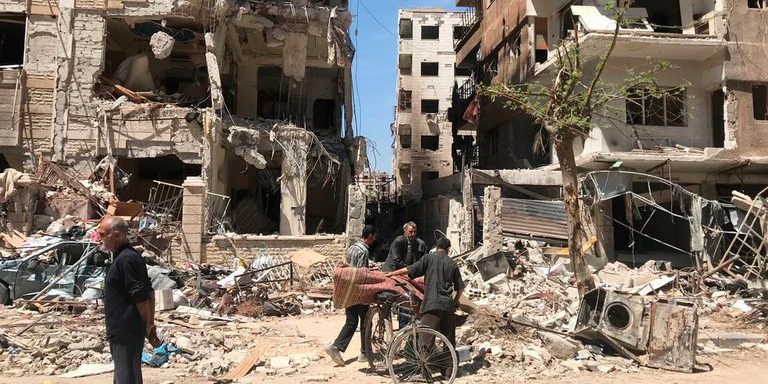 LONDON — Western officials accused Syria and Russia on Monday of preventing weapons inspectors from reaching the site of a suspected chemical attack by the Syrian government that led to airstrikes by the United States and its allies over the weekend.

Inspectors from the Organization for the Prohibition of Chemical Weapons arrived in Syria on Saturday, but two days later, they still had not reached Douma, the Damascus suburb where about 70 people were killed in the attack on April 7. Syrian and Russian forces have captured the area from rebels.

The inspectors are going to the scene to take samples and interview people, but “they are currently being prevented from doing so by the regime and the Russians,” Prime Minister Theresa May of Britain said in Parliament on Monday afternoon.

Even as the war in Syria exacts a fearful toll on the ground, discussion of the suspected chemical attack, like so much of the international posturing about the war, was wrapped in a fog of contradiction and confusion. Nations made charges and countercharges, claiming to have damning but secret evidence about each other’s conduct, with Russia in particular spinning an array of theories of varying degrees of plausibility.

Syrian and Russian officials have told the O.P.C.W. team “that there were still pending security issues to be worked out before any deployment could take place,” Ahmet Uzumcu, the organization’s director general, told its executive council on Monday. The meeting was held in private, but the organization released the prepared statements of Mr. Uzumcu and some other officials.

The British delegation to the organization wrote on Twitter: “Russia & Syria have not yet allowed access to Douma. Unfettered access essential. Russia & Syria must cooperate.” Other Western diplomats confirmed that Syria and Russia were impeding the team.

Senior Russian diplomats said it was the United Nations, not Syria or Russia, that had prevented inspectors from entering Douma. “The problem was the absence of the U.N. Secretariat security department’s approval for O.P.C.W. experts to visit Douma,” Sergei A. Ryabkov, deputy foreign minister of Russia, told reporters, according to the news agency Interfax.

A spokesman for the United Nations, Stéphane Dujarric, disputed the Russian explanation. “The U.N. has given them all the necessary clearances,” he said by telephone. “We’re supporting the team as much as we can.”

Later at his regular noon briefing, Mr. Dujarric said of the O.P.C.W. experts: “We’ve not denied them any sort of clearance.”

Mr. Dujarric declined to say whether Secretary General António Guterres would demand that Russia and Syria provide the experts with access to the Douma site. But the spokesman said Mr. Guterres wanted the investigation to move forward “so we can have a full picture of all the facts.”

The O.P.C.W. declined to comment, and did not even say whether its inspectors had reached Douma, saying in a statement, “We are unable to share operational details.”

The United States ambassador to the organization said at the meeting on Monday that Russia could be trying to conceal evidence of chemical weapons.

“It is our understanding the Russians may have visited the attack site,” the ambassador, Kenneth D. Ward, said. “We are concerned they may have tampered with it with the intent of thwarting the efforts of the O.P.C.W. fact-finding mission to conduct an effective investigation.”

In an interview with the BBC, Sergey V. Lavrov, the Russian foreign minister, said, “I can guarantee that Russia has not tampered with the site.”

The United States and its allies Britain and France used missiles on Saturday to strike targets in Syria that they said had been involved in producing chemical weapons, which President Bashar al-Assad’s government denies having used.

Even before the O.P.C.W. inspectors arrived in Syria, the Western allies said they had ample evidence that the country had dropped a chemical agent on Douma, and that it had used chemical weapons many times during the seven-year civil war.

East-West tensions have been high since Britain accused Russia of using a powerful nerve agent to poison a Russian former spy living in England and his daughter. The Kremlin has denied the accusation, which set off the expulsion of hundreds of diplomats and a series of economic measures against Russia.

“It is the style of today’s London to blame Moscow for everything and ascribe certain actions to which we bear no relation whatsoever,” Mr. Ryabkov said.

Russian and Syrian officials have suggested that the chemical attack in Douma never occurred, or that it was staged by rebel forces or Western powers as an excuse for attacking Syria. Mr. Lavrov accused Britain of playing a part in the alleged ruse.

The Syrian military, with help from its Russian and Iranian allies, this month retook control of eastern Ghouta, a suburban area that was the last major rebel-held enclave near Damascus. Douma was the last part of the region to fall.