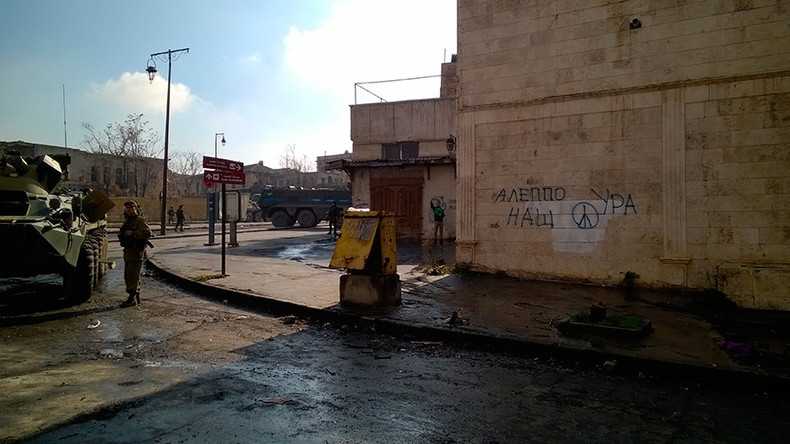 The battalion was sent to Aleppo late December after the city was liberated from the militants, providing security to humanitarian aid workers and Russian sappers who are helping Syrians rebuild their lives.

It has now been tasked with maintaining law and order on the streets of the city devastated by the drawn-out conflict.

The head of Russia’s Chechen Republic, Ramzan Kadyrov, revealed that around 400 soldiers from Chechnya are participating in the policing and law enforcement operation as well as helping with the reconstruction efforts in Aleppo.

Kadyrov wrote on his Instagram page on January 23, that a Russian MP from Chechnya and the Chechen mufti visited Syria and met with the Chechens serving in the military police battalion.

“The soldiers were proud to have an honor of serving in Aleppo as part of a peacekeeping and law enforcement force that protects civilians from the terrorists,” Kadyrov said in his post.

RT’s Maria Finoshina, who recently returned from Aleppo, said locals appreciated patrols in the streets, as people are afraid of looters who took to plundering devastated houses at the same time as residents started returning to their homes. Those trying to reclaim their belongings in the abandoned neighborhoods or wishing to stay view the Russians as their protectors.

With many of the Chechens being Sunni Muslim, their part in the mission would be “solid logic,” Finoshina believes.

“You do not want to see a total stranger patrolling the streets of your home town, so sending Chechens there was a logical decision because they are not only Muslims, they are Sunnis,” she said, adding that Aleppo “is known as a conservative city … and the Chechens are supposed to be familiar with religion and cultural traditions of the people on the ground.”

Aki Rizk, a Middle East expert, told RT the participation of Chechens could really make the Russian military police mission more successful. “It is a very good step, it would lessen the tensions,” Rizk said. The people of Chechnya and Aleppo have much in common both in a cultural and religious sense, he explained.

Rizk added that “the anti-terrorist mood amongst the [Aleppo] population” can also contribute to the success of the mission.

“The Syrian population are sick and tired of the terrorist groups” and “will cooperate with anyone, who stands against these groups,” he said.