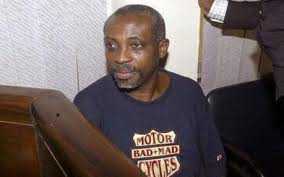 ONITSHA, the commercial city of Anambra State was yesterday thrown into confusion after the Police in the state set ablaze a building at Okpoko Layout, which the operatives described as a hide-out for members of the Movement for  Actualization of Sovereign State of Biafra, MASSOB.
But the owner of the house, Mr. Ikechukwu Agude and his family, faulted Police claims, lamenting that the force had ruined them, saying the house was never a MASSOB hideout.

Agude said: “We don’t have any business with MASSOB members here because they use another building behind ours as their office. I was surprised to hear that our house was set ablaze by the police when I went to work yesterday. My wife went to school because she is a teacher, including my daughter, Onyinye while my first son also went out to his workplace. I have lived in that house since 2006 even before MASSOB came and occupied the house behind mine. That house was the only thing I have in this world, including my family. What has been lost is over N10 million. Governor Willie Obiano should come to our rescue please.”
Counsel to Mr. Agude, Chris Okoro, while reacting, said “We understand the governor is cleansing the state but that does not mean setting ablaze people’s property. The suspected MASSOB members involved should be arrested and interrogated to know their mind. The law should be followed to avoid harming the innocent. The entire process of burning houses is wrong”.
First son of Mr. Agude, Chika, while lamenting the incident, said: “I am finished. My whole certificates from my primary to tertiary institutions have all gone. My mother has developed high blood pressure and now she is in hospital.
“MASSOB office is behind our building and they left it and set our own ablaze while we have all gone to work, including my father, who is a driver at Onitsha South Council Area. As it is now, the family has no other alternative place to live as we have been rendered homeless”.
Also his sister, Onyinye declared: “Our first building was demolished by Power Holding Company of Nigeria in 2011 because they said our house was near the high tension but when my father built it, the high tension was not there. Today, the one he built after the demolition of the other one has also been demolished and this time by the police.”
Also reacting, Mazi Chris Mocha, the Personal Assistant to MASSOB Leader, Chief Uwazuruike, dismissed police claims, saying the house was not occupied by MASSOB members but another Igbo Organization known as Igbo Ga-adinma, which was set up by politicians to fight MASSOB”.
However, Vanguard gathered that the police squad, led by Onitsha Police Area Commander, Mr. Benjamin Wordu, in company of two Divisional Police Officers, DPOs of Okpoko and Fegge, Mr. Emeka Ugwu and Rabiu Garba, stormed the building and set it ablaze.
The source claimed that a gun and some bags of substances believed to be Indian hemp were recovered from the house before it was set ablaze.
The house, police alleged had been used by MASSOB members as their base, where innocent people were allegedly tortured and extorted.