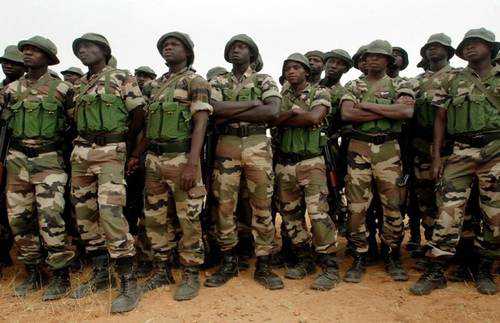 The sack of all service chiefs on Monday has thrown military formations nationwide into anxiety over more imminent sacks, promotions and new appointments. President Muhammadu Buhari, in a clean sweep, removed and replaced against all the service chiefs, including the national security adviser (NSA). The first casualty of the president’s action is the Chief of Army Staff (COAS) Conference which has been called off. The former COAS, Major-General Kenneth Minimah, was presiding over the conference when he was summoned to Aso Rock and relieved of his post.
On returning to the COAS Conference, he was said not to have betrayed any emotion as he presided over the remaining meeting attended by his successor, Major-General Buratai and the new chief of defence staff, Major-General Olonisakin. But when officers and soldiers arrived yesterday at the venue, they were told by the organiser to return to their offices and formations as the conference had been called off.
“Since the COAS Conference is to review the performance of the army under the incumbent where new vision is made with a view to better performance under his watch, the cancelation of the conference is understood. It is the new COAS who would call his own before this quarter is over,” an army officer explained.
Meanwhile, with the new development, the military chiefs are expected to appoint their own men who they trust can execute their plans successfully, and contemporaries of the sacked chiefs may be asked to go voluntarily while their successors are promoted and appointed as well.
This is the source of uneasy calm hanging over all the military formations nationwide, speculations and guesswork constituting the content of the discussions among the officers and men.
“We all know some would be asked to go and those officers would be replaced. This means imminent promotions as the new service chiefs would bring their own men on board for the implementations of their visions. Let me tell you, the situation is dicey,” a top military officer told our correspondent yesterday evening.
“All eyes are now on the new chiefs over how to fight terrorists differently as no excuse will be acceptable. President Buhari has never hidden his plan to put an end to terrorism once and for all. This will dominate whatever vision they might have despite the suddenness of their appointments.”