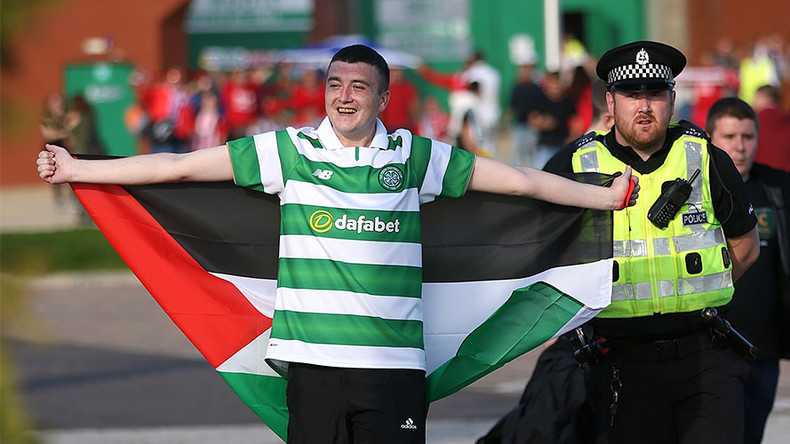 UEFA went on to fine the Scottish football club £8,619 ($10,700) for the fans’ display, which called for support of the Boycott, Divestment and Sanctions (BDS) movement against Israel.

Today’s hand over of money for medical aid in Palestine from the Celtic support ?#MatchTheFineForPalestinepic.twitter.com/YV9AfeG4nR

To help the club pay the fine, the Green Brigade – who self-identify as the club’s ‘Ultras’, or hardcore fan group – set up a crowdfunding appeal to match the sum, promising to send any extra cash raised to Palestinian charities.

Fundraisers said the money will be used to buy equipment and football kits for children in the Aida refugee camp in the West Bank to have a team, which would be called ‘Aida Celtic’.

By the end of the campaign in October, football activists managed to raise £176,076 ($21,900) over the fine amount, which was donated to Lajee Refugee Center and Medical Aid for Palestine (MAP) last weekend.

“What started out as a fan led initiative in exposing the hypocrisy of UEFA’s ‘no politics in football’ mantra quickly spiraled into a viral, worldwide campaign,” the fundraising page says.

Our friends here to collect #MatchTheFineforPalestine giving out gifts to the Celtic fans ? pic.twitter.com/Q0WNJ8mIKz

The presentation of the donation took place in Celtic Way outside Celtic Park before Saturday’s match against Hearts.

Medical Aid for Palestinians (MAP) offers medical care for Palestinians most affected by the Israeli-Palestinian conflict. The Lajee Center charity at the Aida Refugee Camp provides various sports activities for young people at the camp.