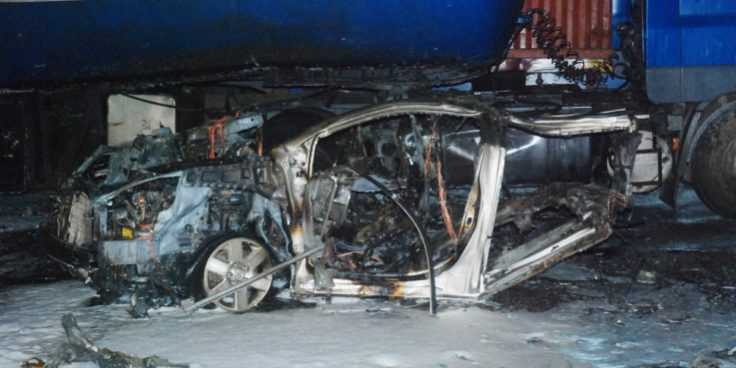 A car laden with bombs yesterday exploded at the ever busy Folawiyo junction on Creek Road, Apapa, killing four persons, while several others were injured.

Eyewitnesses told Vanguard that the car, a Mercedes-Benz 190, exploded around 8:30pm, after it was parked beside a fuel tanker heading into Folawiyo tank farm.
Wreckage of the car

The explosion was said to have shocked residents of Apapa and its environs, which was also said to have affected two banks operating in the area, while many other buildings were also destroyed .

Many residents were scared that the explosion could have been the handiwork of the dreaded Boko Haram sect, who may have targeted the area being a depot of petroleum products.
When Vanguard visited the scene, the wreckage of the Mercedes Benz, was seen at the scene, while the remains of an unidentified woman also littered the ground.

An eyewitness who identified himself as Musa Ali, told Vanguard that he narrowly escaped death when the explosion occurred.

His words: “I am a truck conductor and my truck was on the queue. I was walking towards the Folawiyo junction when I heard the explosion and I thought it was an earthquake. When I looked up I saw a large ball of fire at the spot where I was to buy food and a woman in front of me was badly injured. Fire fighters quickly raced to the scene and after some minutes the fire was put off. When I went close I saw a deep hole at the point where the explosion occurred.”

Another eye witness said: “A car wired with a bomb device rammed under a trailer parked outside the tank farm which exploded at about 8.30pm. We were all scared when we heard the explosion and saw smoke everywhere. There was pandemonium as everyone started running helter-skelter and it was in the midst of this confusion that a man wearing a hijab ran into the compound to detonate another bomb. Apparently, the first bomb was meant to be a distraction.”

However, spokesperson of the Lagos state police command, Ngozi Braide confirmed the incident but stated emphatically that it was not a bomb explosion.

She could however not give details of how the tanker exploded, saying the Divisional Police Officer in charge of Apapa would brief her later.