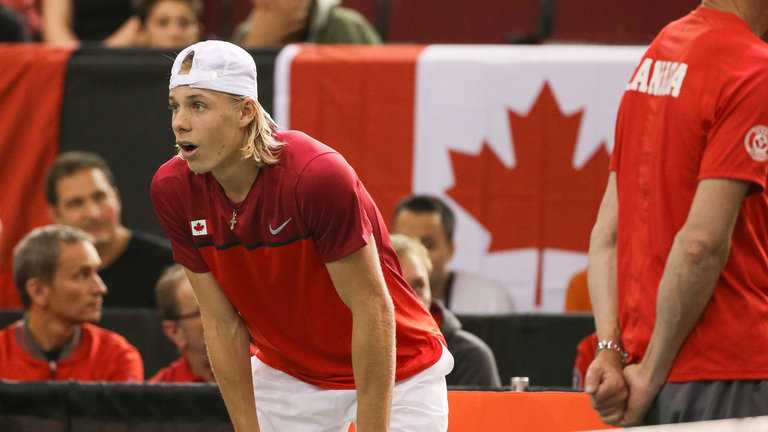 Denis Shapovalov has been fined £5,623 after hitting umpire Arnaud Gabas in the eye with a ball during Canada’s Davis Cup tie against Great Britain.

Shapovalov smashed a ball away in frustration after being broken by Kyle Edmund for a 2-1 lead in the third set, having already lost the first two.

The ball struck umpire Gabas, whose left eye had to be iced after the impact.

Shapovalov, 17, was distraught after the incident and apologised profusely while Gabas was given ice, while TV pictures showed his left eye badly swollen.

After the match, an emotional Shapovalov, who was playing in only his second Davis Cup tie, said: “I feel incredibly ashamed and embarrassed and I just feel awful for letting my team down, for letting my country down, for acting in a way that I would never want to act.

“I can promise that’s the last time I will do anything like that. I’m going to learn from this and try to move past it.”

The fine is less than that handed to David Nalbandian following the Queen’s Club final in 2012, when the Argentine was defaulted after kicking an advertising hoarding into the leg of a line judge and penalised $US10,000 (£8,029) along with his prize money and ranking points.

Novak Djokovic may well have been defaulted from the French Open last year had a line judge not moved swiftly to dodge a racket he bounced off the court in anger.

The world No 2 was then involved in an exchange with a reporter after being asked about an incident at the ATP World Tour Finals in London in November where he hit a ball into the stands.

Andy Murray, meanwhile, kicked a ball in frustration during a match in Cincinnati last summer that nearly hit the umpire.

Canada captain Martin Laurendeau admitted players tread a fine line and said: “The codes are out there, it’s up to the officials to implement abuse of balls, abuse of rackets.

“There’s grey lines. You can smack a ball between line judges and if you don’t hit anyone you’re okay, you can continue, but if you hit his leg or an arm then it’s an automatic default.”

The Shapovalov incident almost certainly did not change the outcome of the tie, with Edmund leading 6-3 6-4 2-1 and seemingly on his way to a comfortable victory.

But it was not the way Britain wanted it to be decided, and was a shame for Edmund, who handled a potentially difficult situation with great aplomb.

Captain Leon Smith insisted he had no clue yet whether Murray would return for the France tie, where the world No 1 will surely be needed if Britain are to stand a chance of making further progress.