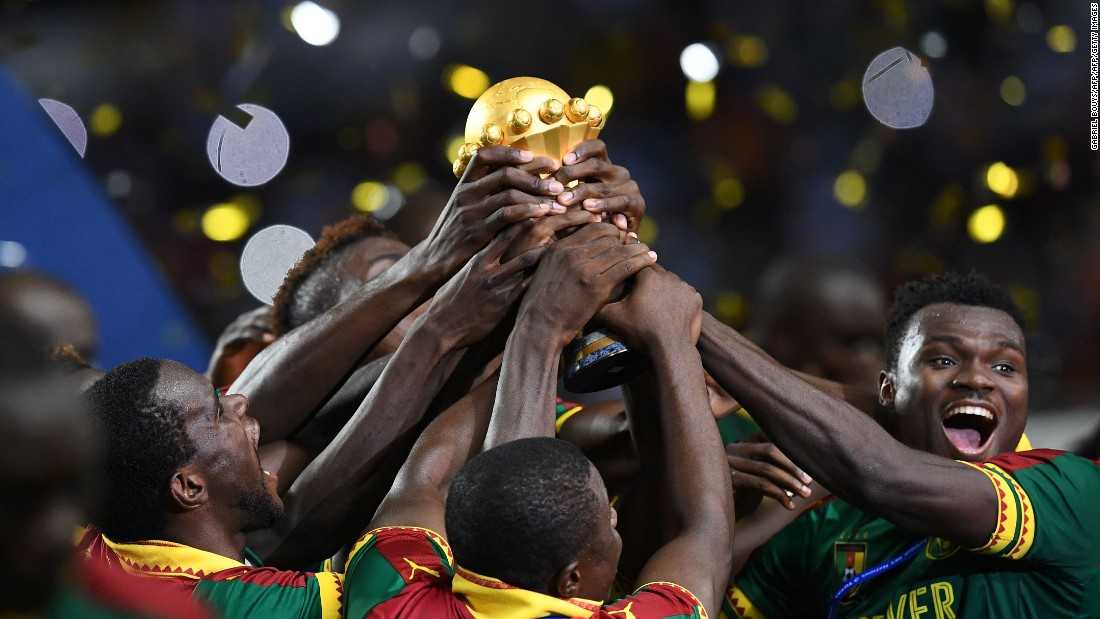 (CNN)Cameroon’s preparation for the Africa Cup of Nations could hardly have been worse.

No less than eight of its star players, plying their trade in European leagues, refused Belgian coach Huge Broos’ call up to the squad.

Follow @cnnsport Now, how those stars — including Liverpool’s Joel Matip and Schalke’s Eric Choupo-Moting — must be sat at home, ruefully glaring at the TV screens as their countrymen lifted Africa’s greatest prize. This was the team nobody gave a chance; a team lacking in quality and experience. But those who answered Broos’ call and traveled to Gabon really wanted to be there; wanted to wear the green shirt and do their country proud.

BREAKING: Cameroon ?? has won the Africa Cup of Nations for a fifth time! #AFCON2017#EGYCAM ??1-2 ?? pic.twitter.com/fxwwHpY6xn

Two second-half goals from Nicolas N’Koulou and Vincent Aboubakar canceled out Mohamed Elneny’s early strike, extending Egypt head coach Hector Cuper’s curse in major finals to six matches. Read More “There was a lot of trouble before, players who wouldn’t come with us,” a victorious Broos told reporters after the final. “OK, it’s their decision. But maybe they are saying now to themselves, ‘S**t! Why didn’t I go with them?’ “I don’t have 23 players, I have 23 friends. Over the weeks we went from being a squad to becoming a family. It’s unbelievable what all the guys did. It is tremendous.” However, it didn’t always look like this would be the outcome. Inside 90 seconds, Cameroon’s defense was pulled apart. Mahmoud “Trezeguet” Hassan won possession in midfield and swept the ball out wide to Mo Salah, whose first-time pass found Abdalla El Said. The Al Ahly forward controlled the ball well and fired a vicious, low drive towards goal but Fabrice Ondoa got down well to hold the ball at full stretch. After defenders Matip and Allan Nyom turned down the chance to represent their country in this tournament, Cameroon’s starting backline in its opening fixture against Burkina Faso could boast just 26 caps. While such inexperience was yet to hinder Cameroon during AFCON 2017, either nerves of naivety were already playing an early part in Sunday’s final. READ: Cameroon shocks Ghana to reach the final READ: Burkina Faso claims third place as Ghanaian misery endures READ: The Ugandan ‘Cranes’ that pleased a murderous dictator READ: Essam El-Hadary, 44, takes center stage Essam El Hadary was first called into action after five minutes. After good work down the right from Christian Bassogog, the ball was played to Sebastien Siani on the edge of the area but his contact was poor and El Hadary gathered with ease.

El-Hadary tastes defeat at the Cup of Nations for the first time for 13 years. #AFCON2017#EGYCAMpic.twitter.com/ENpYZaz551

But Egypt’s early dominance would soon be rewarded. In space down the right, Warda found Elneny who exchanged passes with Salah. Initially looking for the pass across goal, Elneny’s eyes deceived Ondoa as the Arsenal midfielder instead opted to shoot, beating the goalkeeper from the tightest of angles at the near post. Elneny wheeled away, fist clenched, and sank to his knees in prayer by the corner flag. If Cameroon had to do it against the odds before the match, the Indomitable Lions now had a mountain to climb. Egypt rarely concedes and had forgotten how to lose in the Africa Cup of Nations. The Pharaohs last tasted defeat in Africa’s most prestigious competition back in 2004, a run spanning 13 years and 24 matches. The Indomitable Lions now had El Hadary and history to beat. El Hadary was in goal that day, too, but soon proved experience doesn’t necessarily mean an absence of nerves. As he has done throughout the competition, the 44-year-old flapped at a high cross into the box, this time gifting Bassogog possession. However, with El Hadary frantically scrambling back towards his goal, Bassogog could only cut onto his right foot and blaze the ball high into the stands.

Cameroon is awarded a place in the 2017 Confederations Cup, joining Chile, Australia and Germany in Group B. #AFCON2017 ?? pic.twitter.com/axCZk5kd4d

In truth, El Hadary’s unorthodox way of dealing with crosses was the closest Cameroon came to troubling Egypt’s defense. Ahmed Hegazy — affectionately known as the Alessandro Nesta of the pyramids in his home country — and Ali Gabr were forming a formidable partnership, as they had done throughout the competition. Already without those eight pre-tournament dropouts, Cameroon was dealt another major blow just after the half hour mark. Defender Adolphe Teikeu, who has shone throughout AFCON 2017, limped off — close to tears — with a an ice pack strapped to his upper thigh. Though Cameroon continued to enjoy the lion’s share of possession, a toothless display forced Broos into making a change at halftime. Star striker Aboubakar, deemed not fit enough to play from the start, came on to replace an anonymous Ndip Tambe. It proved to be just what Cameroon needed. Revitalized in attack, the Indomitable Lions were now regularly finding space inside the Egyptian half. Down the left, Bassogog continuously provided Cameroon’s most effective outlet, scuttling and scurrying and not giving Ahmed Elmohamady a moment to rest.

Aboubakar has surely won it for the Indomitable Lions at the death! Both substitutes have scored!

And it was from there that Cameroon found the equalizer. Bassogog’s persistence won his side a corner, which captain Benjamin Moukandjo took. His first delivery was poor, but the ball fell back to him fortuitously and this time his cross was floated invitingly into the six-yard box. N’Koulou, only on the pitch due to Teikeu’s injury, did what nobody had previously done in AFCON 2017 and beat Hegazi in the air, diverting the ball past a helpless El Hadary. The sizable Cameroonian contingent erupted inside the stadium, as N’Koulou’s teammates bundled on top of him inside Egypt’s goal mouth. From then on, only one team looked like winning. Egypt’s touches became loose and hesitant, while Cameroon was playing with a surety that belied its relative inexperience. Egypt, previously content to sit back and defend its lead, now looked unable to readjust its game plan. With just 15 minutes to play, Moukandjo had a gilt-edged chance to put Cameroon ahead. However, Egypt hadn’t conceded two goals in a match for the best part of three years and such runs don’t go on so long without an element of good fortune.

Unbeaten at AFCON for thirteen years, the Pharaohs ?? haven’t conceded two goals in any match since 19 November 2014. #AFCON2017#EGYCMRpic.twitter.com/4dgymdV3nZ

An unfortunate bobble just as the captain struck the ball saw his shot fly high over the crossbar, although the Pharaohs’ luck would eventually run out. It took 88 minutes, but Cameroon finally got the goal it had been threatening for the majority of the second half. Siani’s raking, cross field pass found Aboubakar who — as he had done since coming on — did brilliantly to singlehandedly hold off the advances of Hegazi and Ali Gabr, before flicking the ball over the latter and firing a shot into the far corner. Have your say on our Facebook page The noise inside Libreville’s Stade d’Angondje was deafening, as the entire Cameroon bench left their seats and joined Aboubakar to celebrate in front of a sea of green shirts. An agonizing five minutes of stoppage time ensued but the Indomitable Lions had waited 15 years for this moment, they could wait a while longer. Visit cnn.com/football for more news and videos Egypt failed to find the breakthrough and Cameroon wasn’t to be denied. The Lions now rule Africa for a fifth time. In two years’ time, Cameroon will take the pitch as host and defending champion.