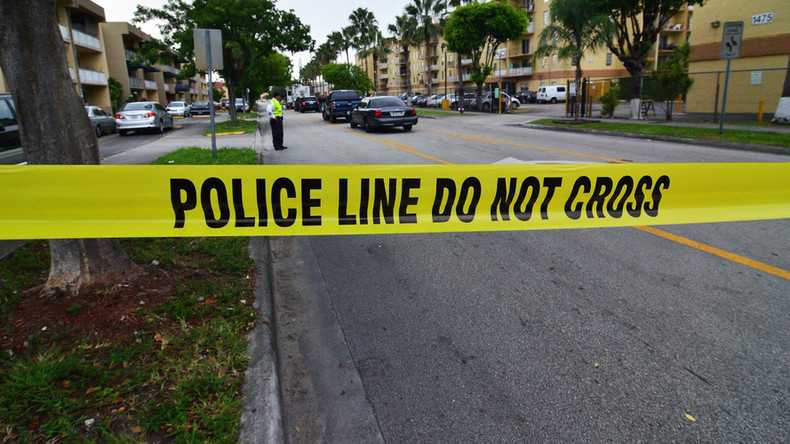 The officers, whose names are yet to be disclosed, were responding to a 911 call at the Torrey Pines High School in the Carmel Valley neighborhood of San Diego at about 3:30am local time on Saturday.

When they arrived at the school’s parking space, located in front of the school’s entrance, the officers saw a youngster who “pulled a handgun from his waistband and pointed it directly at one of the officers,” San Diego Police Department (SDPD) said in a statement.

Despite persistent calls by the officers for the boy to lay down his ‘weapon,’ the suspect reportedly refused to comply with the requests, prompting police to open fire out of precaution, according to police.

“Fearing for their safety, both officers fired their weapons at the male striking him numerous times,” Acting Homicide Lt. Mike Holded said, as cited by CBS8.

He added that the officers, both police veterans, rushed to resuscitate the teenager following the shooting and called an ambulance.

Medics were, however, unable to save the boy who died of multiple gunshot wounds in hospital.

It was later established that the weapon the teen wielded during the standoff was in effect a “semi-automatic BB air pistol.”

None of the officers were injured.

A preliminary probe into the incident suggested that the killed teenager and the anonymous caller who tipped off the police was the same person.

“We believe that he actually called and spoke about himself in the third person,” Holden said, as cited by 41NBC. He noted that the caller did not specify any details of the situation.

“It was a phone call that ‘there’s a male juvenile in front of the school, it appears someone should check on him,” Holden said, referring to it as “a very general ‘check the welfare’ call.”

One of the policemen responding to the call had received a special training in managing situations involving juveniles, according to Holden.

Both officers have now been suspended from field work and have been assigned desk duties, as the investigation is underway.

The fatal shooting was captured on police officers’ body cams, Holden confirmed. However, he did not say if the footage will be released.

The teenager was subsequently identified as a local resident and a student of the school. Police said they will not release his identity because of his age.

Eric Dill, the head of San Dieguito Union High School District to which the school is affiliated, described the incident as “very traumatic for our students, staff, families and community,” urging all those concerned not to speculate on its causes.

“I know this is difficult, but we ask that you please refrain from conjecture or spreading rumors,” Dill wrote.

Counselling will be provided to students and staff at all district schools on Monday.

Balch Springs police officer and Iraq combat veteran Roy Oliver fired into a car of teenagers after they ignored his orders to stop while driving away from a party.

Edwards was hit in the head and died on the scene.

The officer was initially responding to a 911 call alleging that several underage teenagers were consuming alcohol at a party.

In their report on the events, police claimed they also heard several shots being fired at the party.

An attorney for the slain teenager’s family later said that neither he nor anybody in the car possessed any weapons or drank alcohol. Oliver was dismissed from the force on Tuesday for “violating several department policies.”

Edwards’ murder has sparked a massive campaign to bring the officer to justice with about 300 attending a vigil to pay respects to the teenager in Balch Springs on Thursday.