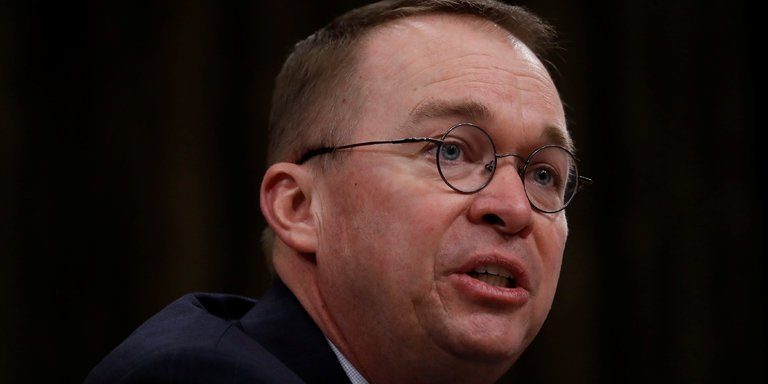 Mick Mulvaney, the acting director of the Consumer Financial Protection Bureau, has complained that the regulator engages in “wasteful spending” and needs to be slimmed down. To underscore the point, he submitted a quarterly budget request recently that was a nice round number: $0.

That attitude, though, apparently didn’t apply to two of his recent hires.

Mr. Mulvaney appointed two senior staff members who are paid salaries of more than $230,000, amounts that are far above what they had been earning in their previous government jobs in Washington, according to agency documents obtained by The New York Times through a public records request.

The consumer bureau, as well as fellow financial regulators like the Securities and Exchange Commission and the Office of the Comptroller of the Currency, is allowed under federal law to pay employees significantly more than other government agencies can pay. The rationale is that the higher salaries are necessary to recruit skilled employees who otherwise might land jobs on Wall Street.

As a result, the C.F.P.B. is stocked with employees who earn more than the average Washington bureaucrat. Of the agency’s 1,600 employees, 219 make more than $200,000, according to the records reviewed by The Times.

The Trump administration and Republican lawmakers have been trying to defang the agency, which they view as overly tough on the finance industry. One weapon they have tried to employ — so far, unsuccessfully — is to reduce the amount of money the agency can pay employees.

But Mr. Mulvaney was willing to shell out top dollar for his highest-ranking appointees.

When Mr. Mulvaney hired Kirsten Sutton in January to be the agency’s chief of staff, he agreed to pay her $259,500 a year, according to the documents obtained by The Times. Her salary is the highest allowed under the consumer bureau’s pay scale. (The hiring documents identify her as Kirsten Mork, but professionally, she uses the surname Sutton.)

That salary represents a raise of more than 50 percent from what Ms. Sutton earned in her previous job working for one of the C.F.P.B.’s fiercest critics, Representative Jeb Hensarling of Texas, the Republican chairman of the House Financial Services Committee. Last year, as the committee’s staff director, she earned a salary of about $170,000, according to data from LegiStorm, which tracks congressional salaries.

Ms. Sutton is making 22 percent more than her predecessor, Leandra English, who earned $212,324 as chief of staff, according to the office of Senator Ron Johnson. The Wisconsin Republican had requested Ms. English’s pay records as part of an inquiry into the C.F.P.B.’s hiring practices.

Like Ms. Sutton, Brian Johnson, another new deputy, previously worked on the House Financial Services Committee. In his most recent job there, as policy director, he earned about $170,000 a year, according to LegiStorm.

When he agreed to join the C.F.P.B. as a senior adviser, Mr. Johnson was sent a letter from a federal human resources employee. “Welcome and congratulations,” said the Dec. 1 letter, which set his starting salary at $220,000.

Before Mr. Johnson’s first paycheck even arrived, his salary already had been raised. In late December, Mr. Mulvaney signed paperwork that awarded Mr. Johnson a salary of $239,595. The document didn’t say why Mr. Johnson’s salary had gone up by $19,000, and a C.F.P.B. spokeswoman declined to comment on the increase.

Of the 20 people at the bureau with the title of senior adviser, Mr. Johnson is the second-highest paid. (Another adviser, whose name wasn’t disclosed in the public records reviewed by The Times, is paid $240,000.)

“Non-career staff are being paid on par with the career staff who directly report to them,” Jen Howard, a spokeswoman for the consumer bureau, said in a written response to questions from The Times. Her statement blamed Richard Cordray, the agency’s previous director, for setting the precedent of paying large salaries to political appointees.

Ms. Sutton and Mr. Johnson did not respond to requests for comment.

Mr. Mulvaney himself is not collecting a salary at the bureau. He is on temporary loan from the Office of Management and Budget, where he is paid a base salary of $199,700, according to FedSmith, which tracks federal employee salaries. Federal rules generally prohibit employees from being paid by more than one agency even when they are juggling multiple jobs, as Mr. Mulvaney is.

The consumer bureau’s high salaries have long been a sore point for the agency’s critics. Republican lawmakers have repeatedly introduced legislation — most recently, in November — that would reduce salaries at the agency by shifting its workers to the government’s standard pay scale. Under that scale, salaries generally max out at $164,200. Democrats have blocked each attempt.

Ms. Howard, the agency spokeswoman, said that Mr. Mulvaney “would be happy” to work with Congress to change the bureau’s pay practices.

In the latest White House budget proposal that Mr. Mulvaney’s office prepared, the Trump administration blasted the consumer bureau for its history of “poor financial and personnel management decisions.” It also asked Congress to curb the agency’s authority and cap its 2019 budget.

Meanwhile, Mr. Mulvaney is starving the bureau of cash. He requested $0 last quarter from the Federal Reserve, which funds the bureau, and instead drew on a $177 million reserve fund the agency had stockpiled.

He has described some payroll cuts he would like to make.

“I found out yesterday that I’m paying people — it’s amazing what you learn in these places — I’m paying people at the C.F.P.B. to do economics research on climate change,” Mr. Mulvaney said last month at a meeting of state attorneys general. “Not sure how that happened, but we’re going to see if we can’t figure out a way to change that.”

Mr. Mulvaney is scheduled to appear next week before two congressional committees, where Democrats are likely to grill him on his decision to end lawsuits against and investigations of some payday lenders. The agency has initiated no new enforcement actions since Mr. Mulvaney took over.

This week, Mr. Mulvaney repeated his plea for Congress to hamstring the agency — which he called “far too powerful, and with precious little oversight” — by stripping away its funding and rule-making power.