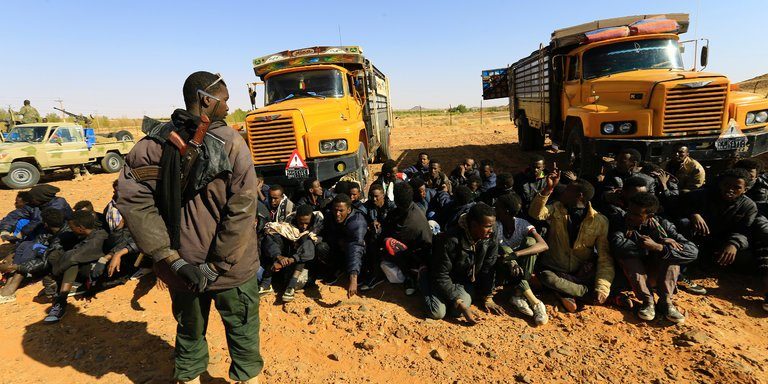 ABU JAMAL, Sudan — At Sudan’s eastern border, Lt. Samih Omar led two patrol cars slowly over the rutted desert, past a cow’s carcass, before halting on the unmarked 2,000-mile route that thousands of East Africans follow each year in trying to reach the Mediterranean, and then onward to Europe.

His patrols along this border with Eritrea are helping Sudan crack down on one of the busiest passages on the European migration trail. Yet Lieutenant Omar is no simple border agent. He works for Sudan’s feared secret police, whose leaders are accused of war crimes — and, more recently, whose officers have been accused of torturing migrants.

Indirectly, he is also working for the interests of the European Union.

Three years ago, when a historic tide of migrants poured into Europe, many leaders there reacted with open arms and high-minded idealism. But with the migration crisis having fueled angry populism and political upheaval across the Continent, the European Union is quietly getting its hands dirty, stanching the human flow, in part, by outsourcing border management to countries with dubious human rights records.

In practical terms, the approach is working: The number of migrants arriving in Europe has more than halved since 2016. But many migration advocates say the moral cost is high.

To shut off the sea route to Greece, the European Union is paying billions of euros to a Turkish government that is dismantling its democracy. In Libya, Italy is accused of bribing some of the same militiamen who have long profited from the European smuggling trade — many of whom are also accused of war crimes.

In Sudan, crossed by migrants trying to reach Libya, the relationship is more opaque but rooted in mutual need: The Europeans want closed borders and the Sudanese want to end years of isolation from the West. Europe continues to enforce an arms embargo against Sudan, and many Sudanese leaders are international pariahs, accused of committing war crimes during a civil war in Darfur, a region in western Sudan.

But the relationship is unmistakably deepening. A recent dialogue, named the Khartoum Process (in honor of Sudan’s capital) has become a platform for at least 20 international migration conferences between European Union officials and their counterparts from several African countries, including Sudan. The European Union has also agreed that Khartoum will act as a nerve center for countersmuggling collaboration.

While no European money has been given directly to any Sudanese government body, the bloc has funneled 106 million euros — or about $131 million — into the country through independent charities and aid agencies, mainly for food, health and sanitation programs for migrants, and for training programs for local officials.

“While we engage on some areas for the sake of the Sudanese people, we still have a sanction regime in place,” said Catherine Ray, a spokeswoman for the European Union, referring to an embargo on arms and related material.

“We are not encouraging Sudan to curb migration, but to manage migration in a safe and dignified way,” Ms. Ray added.

Ahmed Salim, the director of one of the nongovernmental groups that receives European funding, said the bloc was motivated by both self-interest and a desire to improve the situation in Sudan.

“They don’t want migrants to cross the Mediterranean to Europe,” said Mr. Salim, who heads the European and African Center for Research, Training and Development.

But, he said, the money his organization receives means better services for asylum seekers in Sudan. “You have to admit that the European countries want to do something to protect migrants here,” he said.

Critics argue the evolving relationship means that European leaders are implicitly reliant on — and complicit in the reputational rehabilitation of — a Sudanese security apparatus whose leaders have been accused by the United Nations of committing war crimes in Darfur.

“There is no direct money exchanging hands,” said Suliman Baldo, the author of a research paper about Europe’s migration partnership with Sudan. “But the E.U. basically legitimizes an abusive force.”

On the border near Abu Jamal, Lieutenant Omar and several members of his patrol are from the wing of the Sudanese security forces headed by Salah Abdallah Gosh, one of several Sudanese officials accused of orchestrating attacks on civilians in Darfur.

Elsewhere, the border is protected by the Rapid Support Forces, a division of the Sudanese military that was formed from the janjaweed militias who led attacks on civilians in the Darfur conflict. The focus of the group, known as R.S.F., is not counter-smuggling — but roughly a quarter of the people-smugglers caught in January and February this year on the Eritrean border were apprehended by the R.S.F., Lieutenant Omar said.

European officials have direct contact only with the Sudanese immigration police, and not with the R.S.F., or the security forces that Lieutenant Omar works for, known as N.I.S.S. But their operations are not that far removed.

The planned countertrafficking coordination center in Khartoum — staffed jointly by police officers from Sudan and several European countries, including Britain, France and Italy — will partly rely on information sourced by N.I.S.S., according to the head of the immigration police department, Gen. Awad Elneil Dhia. The regular police also get occasional support from the R.S.F. on countertrafficking operations in border areas, General Dhia said.

“They have their presence there and they can help,” General Dhia said. “The police is not everywhere, and we cannot cover everywhere.”

Yet the Sudanese police are operating in one unexpected place: Europe.

In a bid to deter future migrants, at least three European countries — Belgium, France and Italy — have allowed in Sudanese police officers to hasten the deportation of Sudanese asylum seekers, General Dhia said.

Nominally, their official role is simply to identify their citizens. But the officers have been allowed to interrogate some deportation candidates without being monitored by European officials with the language skills to understand what was being said.

More than 50 Sudanese seeking asylum in Europe have been deported in the past 18 months from Belgium, France and Italy; The New York Times interviewed seven of them on a recent visit to Sudan.

Four said they had been tortured on their return to Sudan — allegations denied by General Dhia. One man was a Darfuri political dissident deported in late 2017 from France to Khartoum, where he said he was detained on arrival by N.I.S.S. agents.

Over the next 10 days, he said he was given electric shocks, punched and beaten with metal pipes. At one point the dissident, who asked that his name be withheld for his safety, lost consciousness and had to be taken to the hospital. He was later released on a form of parole.

The dissident said that, before his deportation from France, Sudanese police officers had threatened him as French officers stood nearby. “I said to the French police: ‘They are going to kill us,’” he said. “But they didn’t understand.”

European officials argue that establishing Khartoum as a base for collaboration on fighting human smuggling can only improve the Sudanese security forces. The Regional Operational Center in Khartoum, set to open this year, will enable delegates from several European and African countries to share intelligence and coordinate operations against smugglers across North Africa.

But potential pitfalls are evident from past collaborations. In 2016, the British and Italian police, crediting a joint operation with their Sudanese counterparts, announced the arrest of “one of the world’s most wanted people smugglers.” They said he was an Eritrean called Medhanie Yehdego Mered, who had been captured in Sudan and extradited to Italy.

The case is now privately acknowledged by Western diplomats to have been one of mistaken identity. The prisoner turned out to be Medhanie Tesfamariam Berhe, an Eritrean refugee with the same first name as the actual smuggler. Mr. Mered remains at large.

Even General Dhia now admits that Sudan extradited the wrong man — albeit one who, he says, admitted while in Sudanese custody to involvement in smuggling.

Mr. Berhe nevertheless remains on trial in Italy, accused of being Mr. Mered — and of being a smuggler.

Beyond that, the Sudanese security services have long been accused of profiting from the smuggling trade. Following European pressure, the Sudanese Parliament adopted a raft of anti-smuggling legislation in 2014, and the rules have since led to the prosecution of some officials over alleged involvement in the smuggling business.

But according to four smugglers whom I interviewed clandestinely during my trip to Sudan, the security services remain closely involved in the trade, with both N.I.S.S and R.S.F. officials receiving part of the smuggling profits on most trips to southern Libya.

The head of the R.S.F., Brig. Mohammed Hamdan Daglo, has claimed in the past that his forces play a major role in impeding the route to Libya. But each smuggler — interviewed separately — said that the R.S.F. was often the main organizer of the trips, often supplying camouflaged vehicles to ferry migrants through the desert.

After being handed over to Libyan militias in Kufra and Sabha, in southern Libya, many migrants are then systematically tortured and held for ransom — money that is later shared with the R.S.F., each smuggler said.

Rights activists have previously accused Sudanese officials of complicity in trafficking. In a 2014 report, Human Rights Watch said that senior Sudanese police officials had colluded in the smuggling of Eritreans.

A British journalist captured by the R.S.F. in Darfur in 2016 said that he had been told by his captors that they were involved in smuggling people to Libya. “I asked specifically about how it works,” said the journalist, Phil Cox, a freelance filmmaker for Channel 4. “And they said we make sure the routes are open, and we talk with whoever’s commanding the next area.”

General Dhia said that the problem did not extend beyond a few bad apples. Sudan, he said, remains an effective partner for Europe in the battle against irregular migration.

“We are not,” he said, “very far from your standards.”

A version of this article appears in print on April 23, 2018, on Page A1 of the New York edition with the headline: Sudan Blocks Migrants’ Path, Aiding Europe. Order Reprints| Today's Paper|Subscribe