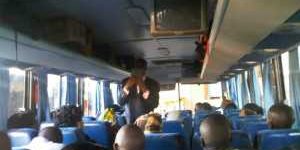 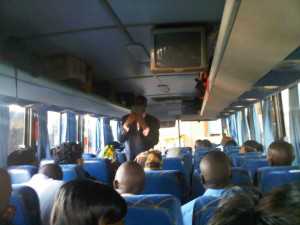 A bus preacher was almost lynched on Saturday morning at Toyota Bus stop, in front of the popular Ladipo Spare parts market, when some condoms allegedly fell out of his bible as he preached the ‘Word of God’.DailyPost gathered that the self acclaimed Man of God was dragged out of the commercial bus and beaten into a pulp before he was rescued by some policemen.

According to information made available to DailyPost, the Pastor had embarked on his journey from Apapa and proceeded to preach to the people on the bus, using very strong words like “If you wear trouser you’ll go to hell! The Devil invented Make up! Weave-on is from Marine Kingdom! If you have pre-marital sex you will burn in hell and your skin will peel!”

It was learnt that the people in the bus were so moved and some started falling under the anointing.

According to an eye witness, Mr. John Mbakogu, who was on his way to his shop at Ladipo, “People were just falling as he was laying hands. One man almost fell out of the bus under the influence of the Spirit. It was amazing until he raised his hands to cast the demons out of one girl, and 2 Durex condoms fell out”

“The angry men in the bus who had been having pangs of guilt due to the pastor’s preaching about sex suddenly got really angry and pounced on him, who all of a sudden started shouting, I also preach safe sex! Safe sex is good!”

However, Policemen had to be called to the scene to save the pastors life. So far 2 arrests have been made, and the Condoms have been kept as evidence.