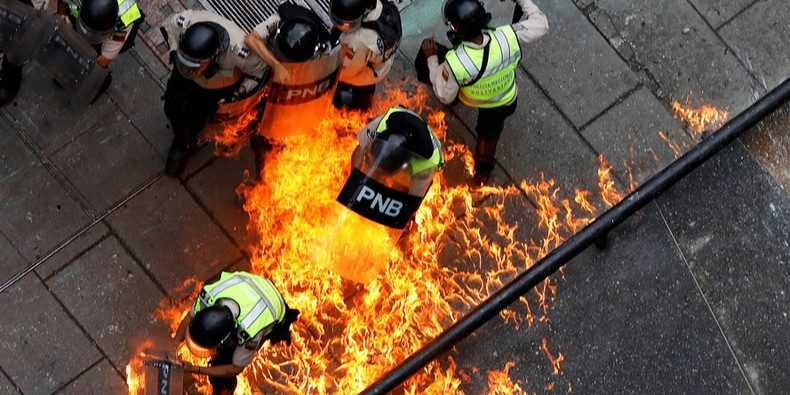 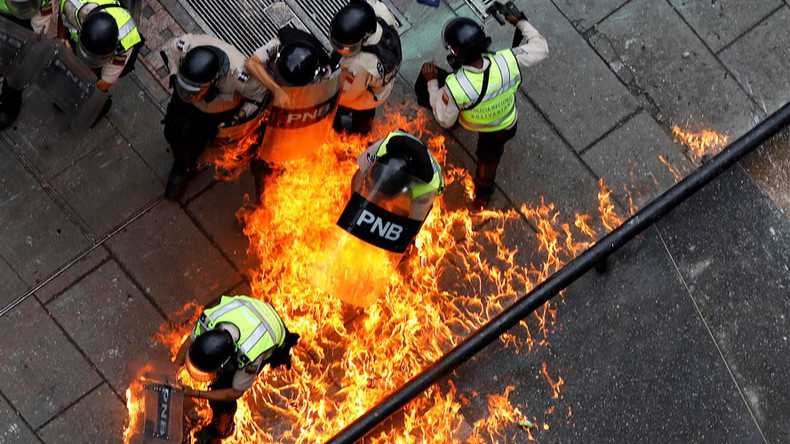 Abby Martin, the host of the Empire Files investigative program on the pan-Latin American TeleSUR TV network has been reporting on the events of the opposition riots in Venezuela’s capital, Caracas.

“Here in the Western press we hear one narrative that [Venezuelan President Nicholas] Maduro’s forces are cracking down and killing en masse peaceful protesters. The reality on the ground is very different. There are tens of thousands of people peacefully protesting either with the government or against the government,” Martin told RT.

However, some protesters are involved into actions called ‘guarimbas’, which means making “giant flaming barricades,” Martin said, adding that by this a small contingent of protesters are “provoking an international response from media and state forces.”

Martin said she saw firsthand what those people do.

“They attack police lines with Molotov cocktails and explosives. And these are the same people who are attacking hospitals, carrying out political assassinations.”

READ MORE: ‘They told me to die & threw a Molotov at me’ – protester on Venezuela riots

Martin said that what her crew did was “simply reporting on the opposition violence.”

“We just reported on this and the result of this was a <…> lynch mob, death threats. I’ve never had so many death threats in my life. It [the mob] actually calls ‘Lynch her, Lynch her, burn her alive’.”

Martin said she saw mobs at the protests burn alive those people whom they see as infiltrators.

“It’s no small thing to be called an infiltrator. It was extremely scary and dangerous. The second you try to contradict their narrative, they threaten to kill you.”

According to Martin, it is very dangerous to be a state journalist on the ground.

“They [opposition protesters] did threaten me. They asked: ‘Where are you from?’ And I said: ‘I am American.’ They said: ‘Good. Film what the government does to us! Don’t film what we do!”

And threats are being transformed “into real-life actions,” Martin said.

“It’s extremely scary. They don’t want their narrative to be punctured,” she added.

Martin said there were “major opposition figures, academics, Emmy award-winning journalists, people based in Miami” among those who issued threats.

Fascists from Venezuelan opposition @nyoli05@mrsmalkovich inciting others to burn us alive just like opp mob did to a young boy recently pic.twitter.com/bBt2ZXpKTN

“We are a centerpiece of viral fake news campaign against us, saying that we [journalists] were actually spies turning protesters in to the intelligence services to get them arrested,” she said.

These lies by official opposition leaders & major press are already inciting dozens of Venezuelan fascists to call for our lynching pic.twitter.com/Vh7lJV7o9L

A TeleSUR journalist was attacked with Molotov cocktails and “was rained down with bullets and shot in the back with a live round from the protesters,” Martin said. She was apparently referring to Adriana Sivori, a teleSUR correspondent, who was injured during the protests in the Latin American country on Monday.

After lynching threats, Venezuelan opp protesters ambush teleSUR journalist with molotovs & shoot her in the back https://t.co/4Rl1NJBLmupic.twitter.com/sMA6fF3Wk6

Venezuela saw a surge in protests in March 2017 which left dozens dead.

Maduro opponents say that his intention to negotiate with the opposition is in fact an attempt to delay regional and municipal elections scheduled for later this year.

Maduro’s government says the opposition refuses to engage in negotiations, but is instead trying to oust him by any means.

READ MORE: ‘Get your dirty hands out of Venezuela’ – Maduro to Trump

Maduro is convinced the unrest in the country has been triggered by external forces, particularly that of the US, with him even telling US President Donald Trump to “get out of Venezuela” on May 20.