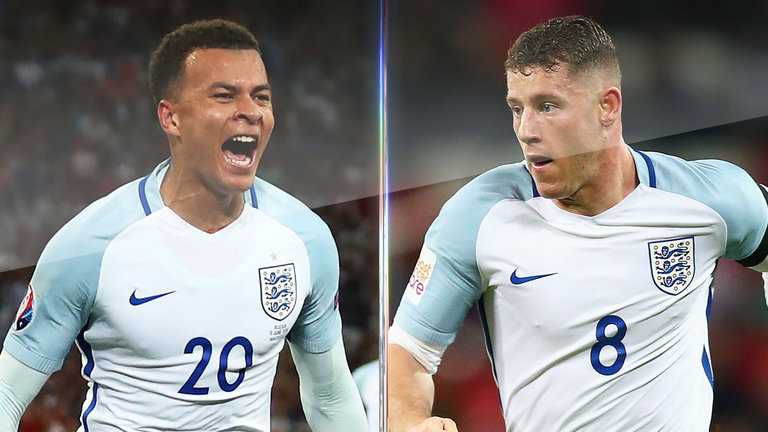 I can’t wait to watch Tottenham and Everton go head-to-head on Sunday. There will be heaps of talent on the pitch, two top managers in the dugout and plenty at stake for two teams aiming to finish above their local rivals.

Right at the heart of the action will be two exceptional young English players, Dele Alli and Ross Barkley.

People say England haven’t got good enough players, but just look at these two. We’re lucky to have them.

It seemed like 20-year-old Alli was surging ahead of 23-year-old Barkley in terms of their development last year, but I think that gap has closed again, after the Everton man stepped up his performances following a frustrating start to the season.

Alli’s decision-making is sometimes better but they’re both so talented and, for me, there’s no doubt they could play in the same side.

England boss Gareth Southgate should be at White Hart Lane on Sunday watching the pair of them and thinking about how he can find a system to bring the best out of both of them on the international stage.

I actually think Barkley is entering an interesting phase of his career. Particularly with Wayne Rooney linked with a move back to Everton.

At the age he’s at, Barkley has moved on from young prospect to a senior player to the next generation at Goodison Park, such as Tom Davies. He now needs to be the main man in the team. But I don’t think he’d get that if the Manchester United captain returned to the club.

I think there’s also a question mark over how long Barkley will stay at Everton. There was obviously some breakdown in his relationship with Ronald Koeman earlier this year and he’s spoken about how he finds it hard to be the local hero there.

With just 18 months left on his contract, he is in control of the situation. But it may be the best thing for him if he moves on.

Another fascinating storyline in this game is which of the in-form strikers, Harry Kane or Romelu Lukaku, will come out on top.

They have scored a combined 11 goals in their past three matches, and are special players.

Who would I rather have on my team? I’d lean towards Kane, as he has a bit more football intelligence, in terms of the way he brings team-mates into play. After another slow start to a season, he looks on course for the golden boot once more.

Both men will have a big say in how their teams finish the season.

For Tottenham, they need to keep working hard to make sure they are well placed should Chelsea slip-up but also to finally finish ahead of Arsenal and book their place in the Champions League next season.

Everton, meanwhile, are also aiming to finish above their neighbours, Liverpool. That would not only give them local bragging rights but also be a sign of the progress they’re making.

As for Sunday, I think Tottenham will just edge it. Everton are starting to look like an exciting side and it will be a good game. But I reckon Mauricio Pochettino’s men will just have enough.