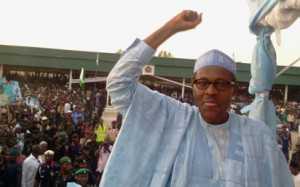 Olawale Olaleyeâ€¨
The All Progressives Congress (APC) presidential candidate Gen. Muhammadu Buhari on Monday dismissed the possibility of continuing with programmes and policies of the President Goodluck Jonathan’s administration, saying to continue on the ideas of a government without clue signals danger.

Buhari, who was responding to questions on continuity during an interactive session with the private sector in Lagos also identified corruption as the bane of economic growth in the country and thus used the occasion to unfold his economic plans for the country if elected president on February 14.

Buhari promised that his administration would critically examine the programmes and policies of the Jonathan administration and address each on the strength of their failure or success, depending largely on their possibility and continuity.

Thus, with strokes of sarcasm, he told the audience that continuing with a seemingly clueless government was not an option because it informed the basis for the change that the country seeks – a remark that attracted intense laughter from the hall at the Lagos House, Marina.

Describing corruption and insecurity as two major obstacles to economic growth, Buhari stressed that his administration would tackle the two vices, if elected as the president.

The former military leader, who also promised to provide jobs through massive investment in agriculture and mining, said the key to economic recovery and poverty eradication is the regular power supply and abolition of corruption.

“Corruption affects our ability to secure ourselves and it also undermines the performance of the economy,” he said.

Buhari flayed the federal government for borrowing money to fight Boko Haram insurgency in a country that successfully fought a civil war without incurring debt.

“When Chief Obafemi Awolowo was the Vice Chairman of the Federal Executive Council and Federal Commissioner for Finance, we did not borrow money to fight the civil war. But they rushed to the National Assembly to borrow N1billion to fight Boko Haram.”

Fayemi, who welcomed the businessmen to the parley, reflected on the yearning for economic renewal and revival for the progressive transformation of the country. He said through creative interventionist initiative by the government, countries in distress have always risen to economic progress in the period of grave crisis and adversity.

The Host Governor, Babatunde Fashola highlighted the difference between the APC and the PDP, saying the APC manifestoes are people and research-based.

“APC’s manifesto is designed to address 2015-2019 problems. PDP has 1999 manifestoes. The naira has weakened. Interest rate has skyrocketed. We need to choose whether we should change Jonathan or we need continuity.  The necessity now is to halt the downturn. If they couldn’t do much at 100 dollars per barrel, they cannot do better when the resources are decreasing.”

Buhari, who promised to encourage periodic and regular meetings with the business community, said his administration will be committed to economic growth, job creation and restoration of the dignity of labour among Nigerians.

“Our policies for implementing our commitments will be governed by the highest consideration of how they create jobs. Equipping and resourcing our security personnel, for example, will not be limited to the provision of arms alone, but uniforms, boots and accoutrements, are enormous opportunities for textile production, garment and shoe making.”

Buhari explained why power generation and transmission have been erratic, despite the privatilisation of power utilities. He said: “Power supply is the minimum that we can seriously commit to in order to quickly galvanise the economy back to productivity.

“We agree with the privatisation of the power utilities, but we believe it must go further to transmission.  After the signing and handing over ceremonies of the power assets, the real work of producing, transmitting and distributing power is really just beginning.

“The reason the success seems elusive is that apart from the signing ceremony and handing over of the power assets, the hard work to connect the various parts of the power chain, supply gas, install transformers, complete substations has not been done. Our studies show that we will require no less than 200,000 trained personnel to support the initiative to provide power and light up Nigeria.”

Buhari argued that apart from the inherent direct employment that the revival of the sector will create, the reduction in the cost of production, the savings from self-generation by Nigerians, who currently spend their income on purchase of diesel and petrol to generate their own electricity, will reduce the burden on their disposable income. He said these savings will be spent by Nigerians on other basic necessities of life, thereby reducing poverty.

He promised that his government would support the initiative to build a refinery in Lagos, adding that the move will lead to job creation, local fuel supply and national security and reduce importation, less demand for foreign exchange and strengthen the naira.

While promising to fight the infrastructure battle, Buhari emphasised that road construction will be a major priority of his administration.

“The successful opening up of Nigeria by the construction of new roads and highways will revive road transportation, truck manufacture, tyre manufacture, engine oil, and brake pad production. It will also create a demand for jobs for mechanics, drivers, and those engaged in transport support business. We expect a revival of inter-state economies that used to thrive across Nigeria, providing support to travellers by way of canteens, restaurants and farm produce.”

Buhari said he would promote a discussion between the business community and his economic team to explore options of reducing taxes and customs duties without too much disruption to government finances and private sector business plans.

He also spoke on the APC manifestoes and campaign message, which in his view, reflect the yearnings of Nigerians for change. He said during the survey that took place in 36 states, Nigerians indicated that insecurity, corruption and the economy were their biggest worries.

“That is why I have been talking about insecurity and corruption on one hand and mining, agriculture, infrastructure and jobs on the economic side.”
Buhari who claimed corruption has almost become a culture in Nigeria, Buhari added that “They are so inter-connected and the Nigerian people are right in their identification of these problems. We cannot build an economy in an insecure environment.

“We cannot build an economy when the playing field is not level. We cannot build an economy where corruption is the working capital. Corruption affects our ability to secure ourselves and it also undermines the performance of the economy.”
Buhari, therefore, challenged the Jonathan administration to account for the missing 20 billion dollars, adding that Nigerians are waiting for the report of the forensic audit.

“Twenty billion dollar at N210 to 1 dollar is equal to N4.2 trillion, which is nearly a year’s federal budget.”