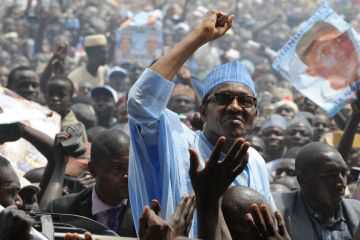 Condemns ethno-religious colouration of his candidacy

The presidential candidate of the All Progressives Congress (APC), Muhammadu Buhari, sunday lamented the growing insecurity in the North-east region, adding that Nigeria is blessed with human and material resources “to secure itself.”

Also, Buhari has condemned the perceived ethno-religious colouration of his presidential aspiration, noting that his candidacy had nothing to do with any ethnic agenda or religious body, but purely about the prevailing need to salvage Nigeria.

He stated this in an interview with Arise Television last night, thereby expressing strong resolve to make the fight against insecurity in different parts of Nigeria and endemic corruption in public sector top priorities if his government is elected.

Disturbed by the activities of Boko Haram insurgents in the North-east, Buhari blamed the worsening insecurity in the geo-political zone on what he described as the sheer incompetence of the administration of President Goodluck Jonathan.

He acknowledged that security “is the hottest issues in the country today. Security is not about Boko Haram insurgency alone. There are other issues throughout Nigeria. But the activities of Boko Haram pose graver threat to Nigeria.

“I think fair incorporation of the military is very important. The government’s failure to deal with the insurgents effectively has been a challenge. But Nigeria is so resourceful both in human and material to secure itself. This failure has portrayed the sheer incompetence of the federal government.”
The former head of state explained that nobody “is happy with what is happening in the country now. We are following the development of the Boko Haram insurgency. This thing is happening in the area of opposition. This is where we have insurgents.”

Aside, Buhari clarified the rationale behind his presidential aspiration, which he acknowledged publicly that he could no longer pursue after he lost to President Jonathan in the 2011 presidential election at the third attempt.

The APC presidential candidate said he yielded to the calls from his supporters from many parts of the country, saying after the failed third attempt, he did not want “to attempt again. But my supporters want me to attempt again.

“I received calls from all over Nigeria to contest again. I agreed because since I got calls from my supporters, I have to be what my supporters want me to be. The true support I have is from the public,” Buhari explained.
On the credibility of the elections, the APC presidential candidate said he had been talking “to agents and the Independent National Electoral Commission (INEC). “We are trying to get there. We are trying to mobilise our supporters that this is INEC and that this is our votes, our future. We are talking to them to pass information to us because information is very important.”

On the claims by the many that he is out of touch with reality given his age, he asked: “Is Information and Communication Technology (ICT) the qualification that makes a credible leader?”

Speaking on the Emir of Kano calling on citizens to defend themselves against the Boko Haram insurgents, Buhari said it was rightfully so because the government has not been able to defend the citizens, as he pledged to tackle corruption, noting that unless Nigerians “kill corruption, corruption will kill Nigerians.”