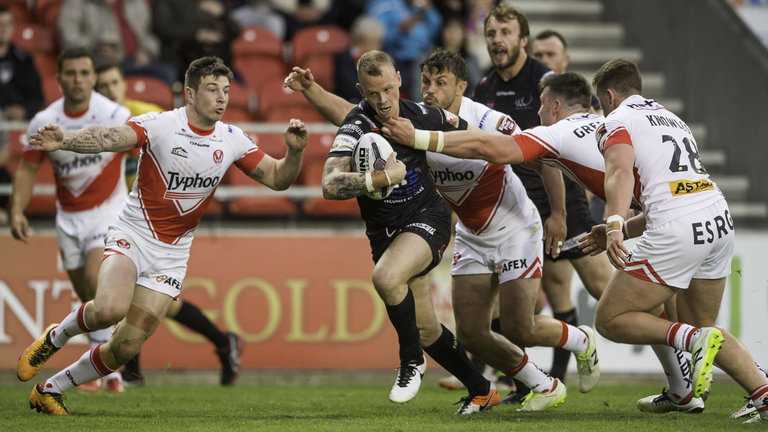 New Warrington stand-off Kevin Brown has admitted that he took a pay cut in order to finalise his move from Widnes Vikings to local rivals Warrington Wolves.

Brown, 32, announced in December that he would be leaving the Vikings to join Cheshire rivals Warrington after spending three years at Widnes under Denis Betts.

England international Brown was brought in by Warrington for an undisclosed fee after the unexpected departure of Australian half-back Chris Sandow.

Former Wigan and Huddersfield stand-off Brown has admitted that St Helens were also interested in signing him and that he has received plenty of abuse from Widnes fans for his decision to move.

“I got a fair bit of stick off the Widnes fans,” said Brown. “It was hard because it happened so quick.

“On day three of my family holiday in Mexico, I got a phone call from my agent saying there was interest from Warrington and did I want to go?

“Then I got a call from the Widnes chief executive James Rule three days later saying a deal had been done.”

Brown, who has appeared for England on five occasions, has admitted that he still loves the club and his move was driven only by a desire to win trophies.

“A lot of people think it was for financial reasons but that couldn’t be further from the truth. I’m on less money here than I was there,” said Brown

“I’ve come here to win things. At Widnes I just didn’t feel like in my time that we were actually challenging to win. Although we were improving, I just felt I didn’t have long enough left in my career to win something at Widnes.

“That was ultimately the decision, whether it’s right or wrong we’ll probably only see in a couple of years but I genuinely am excited for the first time for a long time, feeling I can actually lift a trophy. It’s why I train so hard and sacrifice so much.

“I love the club and I got on well with everyone and I feel I left them better than when I came. They bought me, I played for them for four years and they got a great fee for me. I feel it’s been good for both parties. I hope Widnes can do really well and invest that money.

“I’ll still be hoping that they can win and it would be ideal if we could finish first and they could finish second.”