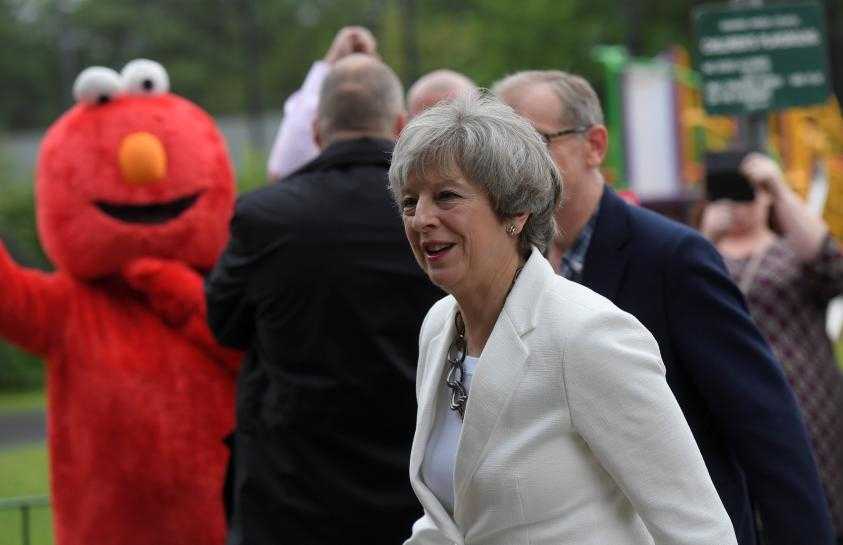 LONDON Britons began voting on Thursday in a snap election predicted to give Prime Minister Theresa May a larger parliamentary majority, which she hopes will strengthen her hand in looming divorce talks with the European Union.

A final survey backed other opinion polls in the last 24 hours, suggesting that the Conservatives had widened their lead following a tricky campaign in which their support appeared at times to be ebbing away.

But as many as one in five voters was still undecided this week after a seven-week campaign overshadowed in the later stages by two Islamist attacks that killed 30 people in Manchester and London in less than two weeks.

Most polling stations had increased security as they opened at 0600 GMT, with armed police expected to reinforce regular officers at some locations.

May smiled but did not speak to media as she and her husband Philip voted in the village of Sonning on the River Thames in her Maidenhead constituency.

Labour leader Jeremy Corbyn grinned broadly and gave the thumbs-up to reporters and party workers as he voted in Islington, north London.

“I’m very proud of our campaign,” he said.

An Ipsos MORI poll for the London Evening Standard on Thurday put the Conservatives on 44 percent and Labour on 36 percent, a wider lead than they had a week ago but not win the landslide foreseen when May called the election seven weeks ago.

“The Conservatives had a wobble last week, but have regained a clear lead in the last few days,” said Gideon Skinner, head of political research at Ipsos MORI.

Headline rates for sterling, hit two-week highs in morning trade in London after the latest polls.

But market bets on how volatile the pound will be over the next 24 hours surged to their highest in a year as some surveys showed the election had become too close to call.

Voting ends at 2100 GMT and an exit poll will be issued then. The first handful of seat results are expected to be announced by 2300 GMT, with the vast majority of the 650 constituencies due to announce results between 0200 GMT and 0500 GMT on Friday morning.

Both main parties were on the defensive after Saturday’s van and knife attack in the heart of London. May faced questions over cuts in the number of police officers during her six years as interior minister and Labour leader Jeremy Corbyn drew criticism for, among other things, voting against some counter-terrorism legislation.

Police investigating the London attacks said they had arrested three more suspects late on Wednesday. Two of the men, aged 27 and 29, were held on suspicion of preparing acts of terrorism while the third was detained over suspected drugs offences.

In the final hours of campaigning, both leaders returned to their core campaign messages.

“If we get Brexit right, we can build a Britain that is more prosperous and more secure, a Britain in which prosperity and opportunity is shared by all,” May said in a last appeal to voters to trust her to “knuckle down and get the job done”.

After becoming prime minister without an election in the turmoil that followed last year’s EU referendum, May wants a personal mandate and a parliamentary majority bigger than the one she inherited from predecessor David Cameron.

Basing her campaign on the slogan of “strong and stable leadership”, she has said she alone could face the 27 other EU leaders and clinch a deal that would give Britain control over immigration policy while ensuring favourable trading terms.

She has portrayed Corbyn as the weak and hapless leader of a spendthrift party that would hit voters with a “tax bombshell”, crash the economy and flounder in the Brexit negotiations.

Corbyn has hit back that Conservative fiscal austerity imposed since 2010 has hurt the poor and widened social inequalities.

May’s campaign has not gone to plan, and as the poll leads of 20 points or more she was enjoying when she called the early election in April have shrunk, talk of a landslide victory has faded and her personal standing has taken a hit.

As a result, the extent of her control over her fractious party and of her margin for maneuver going into the Brexit talks will hinge on the size of her majority, and on whether it is perceived to be a significant improvement on Cameron’s.

Provided she wins, she will have averted at least one risk: by pushing back the date of the following election to 2022 rather than 2020 as originally planned, she has ensured she will not face crunch time in the Brexit talks at the same time as an election.

Some in the EU are hoping May does increase her majority, on the basis that the main risk for the bloc is a collapse in talks, and that is more easily avoided with a British government that is not vulnerable at home.

But others have sought to downplay the impact of the election regardless of the outcome, suggesting that it was little more than a domestic political sideshow.

“Will the election of more Tory (Conservative) MPs give May a greater chance of securing a better Brexit deal? For those sitting around the table in Brussels, this is an irrelevance,” wrote Guy Verhofstadt, the European Parliament’s chief Brexit negotiator, in an opinion column in the Guardian newspaper.

May’s troubles began on May 18, when she announced a new policy on care for the elderly that quickly proved unpopular. She backtracked days later, prompting opposition critics to pour scorn on her central claim to offer strong leadership.

Opponents were quick to remind voters that May had campaigned for Britain to stay in the EU before embracing Brexit after the referendum, and that she had insisted for months an election would not be in the national interest before calling one.

May has reacted by sticking to her campaign messages, endlessly repeating the same slogans and appearing mostly at tightly controlled events – prompting many in the media to deride her as an uninspiring “Maybot”.

Meanwhile, veteran left-winger Corbyn, who was written off as a no-hoper by most political analysts, surprised on the upside with a policy-rich campaign that drew large, fervent crowds to his events – although sceptics say his appeal in the broader electorate is limited.

He proposes building a fairer society through policies such as raising taxes for the richest 5 percent, scrapping university tuition fees and investing 250 billion pounds ($315 billion) in infrastructure – plans which the Conservatives say are fiscally irresponsible.

“As we prepare for government, we have already changed the debate and given people hope. Hope that it doesn’t have to be like this, that inequality can be tackled, that austerity can be ended, that you can stand up to the elites and the cynics.”

There was only one point of agreement between May and Corbyn, which was that the strongest signal that Britons could send to show they were not cowed by the recent spate of attacks would be to go out and vote.