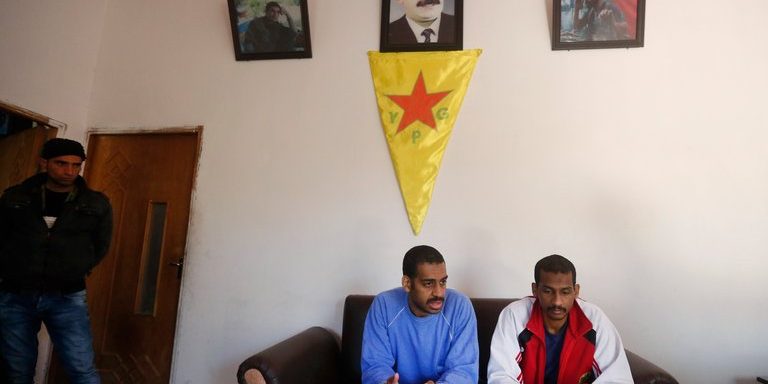 KOBANI, Syria — Two British detainees in Syria who are accused of being part of a murderous Islamic State cell denounced the United States and Britain as “hypocrites” and complained they would not get fair trials because they were reportedly stripped of their citizenship.

The men, El Shafee Elsheikh and Alexanda Kotey, were part of a group with two other British jihadis that was nicknamed “the Beatles” by captives because of their English accents, officials say.

The two were captured by Syrian Kurdish fighters in January in eastern Syria as Islamic State forces were routed and are being held in an undisclosed location, but they were taken to a Kurdish security center in the town of Kobani, where they spoke to The Associated Press.

They refused to address accusations that in 2014 and 2015 they were part of the cell that officials said held more than 20 Western hostages in Syria and tortured many of them, including the American journalist James Foley.

They are accused of beheading seven American, British and Japanese journalists and aid workers and a group of Syrian soldiers, and boasting of the butchery in videos released around the globe. The two said the killings of the captives were a mistake — but for tactical reasons.

Many in the Islamic State group, known as ISIS, “would have disagreed” with the killings “on the grounds that there is probably more benefit in them being political prisoners,” Mr. Kotey said.

“It was something that was regrettable,” he said. He also blamed Western governments for failing to negotiate, noting that some hostages were released for ransoms.

Mr. Elsheikh said the killings were a “mistake” and might not have been justified. But, he said, they were in retaliation for killings of civilians by the United States-led coalition fighting ISIS.

The beheadings, often carried out on camera, horrified the world soon after ISIS took over much of Iraq and Syria in 2014. The group also committed wide-scale atrocities, massacring thousands of Iraqi troops and civilians and taking sex slaves.

Mr. Foley’s mother, Diane Foley, called on the international community and United States government “to have the courage to hold these men accountable in an open trial where we can face them and they can hear all the pain and suffering they’ve inflicted on the world.”

Ms. Foley added that she opposed the death penalty for the detainees since it would feed jihadi “desire for martyrdom and heroic afterlife.”

The two suspects’ detention has set off a debate in the United States and Europe about how to prosecute Westerners who joined the militants — as the Kurds pressure the West to take them back to relieve prison crowding.

Mr. Elsheikh, whose family went to Britain from Sudan when he was a child, was a mechanic from White City in West London. He traveled to Syria in 2012, initially joining a branch of Al Qaeda before moving on to ISIS, according to the United States State Department. It said he had “earned a reputation for waterboarding, mock executions and crucifixions” while serving as an ISIS jailer.

Mr. Kotey, who is of Ghanaian and Greek-Cypriot descent and converted to Islam in his 20s, is from the Paddington district of London.

The leader of the cell, Mohammed Emwazi, was called “Jihadi John” after he appeared, masked in the videos, sometimes performing the butchery. He was killed in an American-led coalition drone strike in 2015 in the Syrian city of Raqqa. Another member, Aine Davis, was arrested in Turkey, convicted there in 2017 and sentenced to seven years in prison.

The two detainees in Syria denounced as “illegal” the British government’s reported decision in February to strip them of citizenship. The revocation exposes them to “rendition and torture,” Mr. Elsheikh said.

Mr. Kotey said the fairest venue for a trial might be the International Criminal Court in The Hague. The citizenship decision was widely reported in the news media, though British officials have not confirmed or denied it, citing privacy rules.

The United States has been pressing for the home countries of foreign jihadis in Iraq and Syria to take their nationals for trial. Britain’s defense secretary has said they should not be allowed back into the country.

Kurdish officials complain they are being left to deal with ISIS’ legacy, including foreign fighters whose home countries do not want to take them back.