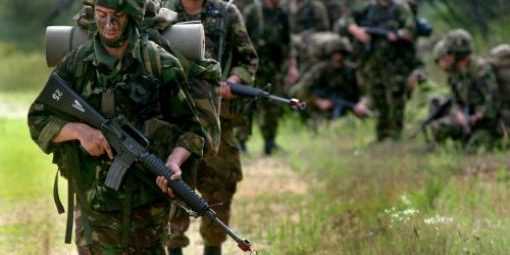 Hundreds of British troops are set to be sent to Nigeria to help local forces in their war with Al Qaeda-linked terrorists holding nearly 300 schoolgirls hostage.

Details of the planned deployment show that plans have been drawn-up for UK soldiers to be flown to West Africa to provide specialist training to Nigerian forces as part of a package of assistance provided by the British government to tackle the threat posed by the increasingly bold militia.

Both ministers and military chiefs in London have yet to sanction the plans being put forward by senior officers attached to the specialist UK team sent to Nigerian capital Abuja following the kidnap by the Islamist gunmen of the schoolgirls in April from a school in the north of the country.

Officials stress the troops would not be involved directly in the hunt for the girls or take an active role in any military action against Boko Haram which has carried out a series of devastating bombings across Nigeria.

Boko Haram leader Abubakar Shekau offered to trade the girls for the release of prisoners, which was declined by the Nigerian government

The UK government is said to be anxious to give the Nigerian administration of President Jonathan help in providing security against the terrorists without committing any UK troops to ‘high risk’ deployments such as the hunt for the girls or placing them in a position where they could be drawn in to fighting the well-armed Boko Haram gunmen.

Britain, France and the United States already have Special Forces, anti-terror experts and specialists in hostage negotiation in Nigeria helping to pinpoint where the girls – abducted at gunpoint from their school at Chibok in Borno province on April 14 – are being held.

Britain, the US and France have been using aerial surveillance, satellite intercepts and evesdropping on telephone calls made between suspected representatives of the kidnappers and their supporters to track the movements of Boko Haram gunmen.

The girls, who were mainly Christian, are thought to be held in the vast Sambisa forest reserve, which is three times the size of Wales, close to the border with Chad and Cameroon.

Their plight has led to an international social media campaign to free them spearheaded by Michelle Obama and backed by politicians and celebrities, including David Cameron, Angelina Jolie and Leona Lewis.