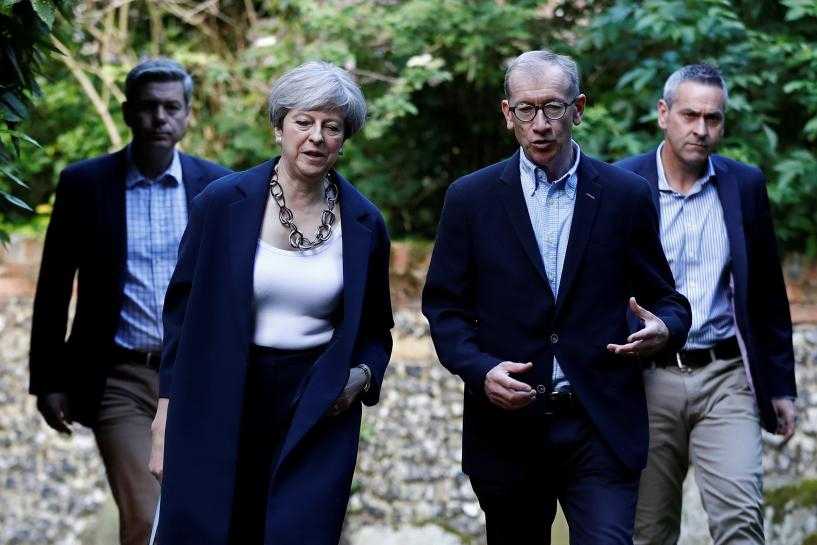 LONDON Britain’s Theresa May told her party on Monday she would serve as prime minister as long as they wanted after a botched election gamble cost the party its majority in parliament and weakened London’s hand days before formal Brexit negotiations.

With British politics thrust into the deepest turmoil since last June’s shock Brexit vote, EU leaders were left wondering how the divorce talks would open next week.

Despite her party’s expectations of a landslide victory, May lost her majority in parliament, pushing her into rushed talks on a support agreement with a small eurosceptic Northern Irish Protestant party with 10 parliamentary seats.

May faced Conservative party lawmakers at a meeting of its 1922 Committee. Despite anger at the election, she was cheered briefly at the start of the meeting.

“She said ‘I’m the person who got us into this mess and I’m the one who is going to get us out of it,'” said one Conservative lawmaker who attended. “She said she will serve us as long as we want her.”

Lawmakers, who are by tradition not named at such meetings, told Reuters that there were no dissenting voices and that the party had no appetite for a leadership election.

May appeared contrite, sought to apologize for her failed election gamble and gave an explanation of what went wrong.

While some members of her party have said she will have to go eventually, May is expected to stay on as prime minister at least for now.

May has promised to start the formal Brexit talks next week but her authority has collapsed since the election result and opponents took her woes as a chance to push back against her Brexit strategy.

During the campaign, May cast herself as the only leader competent enough to navigate the tortuous Brexit negotiations that will shape the future of the United Kingdom and its $2.5 trillion economy.

At the meeting with lawmakers in Parliament, May recognized that a broader consensus needed to be built for Brexit and made clear that she would listen to all wings of the party on the issue.

She mocked Labour leader Jeremy Corbyn, a socialist, as incompetent and unrealistic, but his electoral campaign energized the youth vote and wiped out the Conservatives’ majority in parliament.

May plans a clean break from the EU, involving withdrawal from Europe’s single market and customs union and limits on immigration from the EU.

Her spokesman insisted her position on Brexit remained unchanged but Scottish Conservatives were pushing for her to move the focus onto economic growth and away from immigration, sources in the Scottish branch of the party said.

EU talks might not begin on June 19 as expected, Brexit minister David Davis said and the Queen’s Speech, due on the same day in which the government traditionally spells out its policy plans, has also been delayed, the BBC reported.

May wants to negotiate the divorce and the future trading relationship with the EU before Britain leaves in March 2019, followed by what she calls a phased implementation process to give business time to prepare for the impact of the divorce.

But her election failure means she must now go into Britain’s most complex negotiations since World War Two with her eye firmly on the different factions within her Conservative Party, which has been divided over EU membership for a generation.

Opponents of a sharp break include Ruth Davidson, leader of the Scottish Conservatives. who helped the party win 12 more seats in Scotland in contrast to losses elsewhere. She has called for a closer relationship with the EU after Brexit.

“There can be changes in the offer of Brexit as we go forward,” Davidson told reporters in London after meeting May.

“What’s clear is that there is going to be a real imperative on the economic impact of Brexit, to make sure that Brexit works for the whole country, to make that we’re able to pursue free trade,” Davidson said.[L8N1J923P]

May’s spokesman said it remained government policy to cut net migration to under 100,000 and Brexit Minister David Davis also said walking away without securing a deal with the remaining 27 EU states remained a possibility.

While Britons voted by 52 to 48 percent for Brexit in last year’s referendum, Scots strongly backed staying in the bloc and Nicola Sturgeon, First Minister in Scotland’s devolved assembly, said a so-called Hard Brexit was “dead in the water”.

Ratings agency Moody’s and Irish Prime Minister-designate Leo Varadkar also said the election made the opportunity of a “Soft Brexit” more likely, but Davis downplayed the chances of Britain staying in the single market.

Before the government can do anything it must finalize a deal with the Northern Irish Democratic Unionist Party (DUP). May is due to meet its leader Arlene Foster on Tuesday.

In an article in the Belfast Telegraph, Foster listed three priorities, including getting Northern Ireland’s devolved power-sharing government at Stormont working again.

“We stood on a clear policy platform of wanting to strengthen the Union, of working for a good deal for Northern Ireland as the United Kingdom leaves the EU, and of promising to do our best to get Stormont up and running again for the benefit of all,” Foster wrote.

“We will use the position we find ourselves in to do as we promised.”

Davis, who said that some policies in the government’s program would now be pruned back, was one of a number of senior Conservatives to publicly pledge loyalty to May.

Foreign Secretary Boris Johnson, who is touted as the favorite to replace May should she be forced out, called on colleagues to rally behind her.

However, George Osborne, a former finance minister who is now editor of London’s Evening Standard newspaper and a vocal critic of May, said she appeared a “dead woman walking”.

Britain’s descent into political crisis just days before the Brexit talks begin has sapped confidence amongst business leaders and infuriated bosses who were already grappling with the fallout from the vote to leave the EU.

The uncertainty has hit business confidence, according to a survey by the Institute of Directors (IoD). It found a negative swing of 34 points in confidence from its last survey in May.

The pound slid to its lowest level for nearly two months after the vote, but the fall was much less severe than the one sparked by the Brexit vote in June 2016. On Monday, the currency was under pressure once again.

“The UK has had a reputation, earned over the generations, for stability and predictability in its government,” said a senior executive at a multi-national company listed on the London FTSE 100, speaking on condition of anonymity.

“That reputation in 12 months has been destroyed, truly destroyed. First by Brexit and now through this election. That has really profound implications for multinational businesses that have made a long-term bet on London being the sensible place to base themselves.”