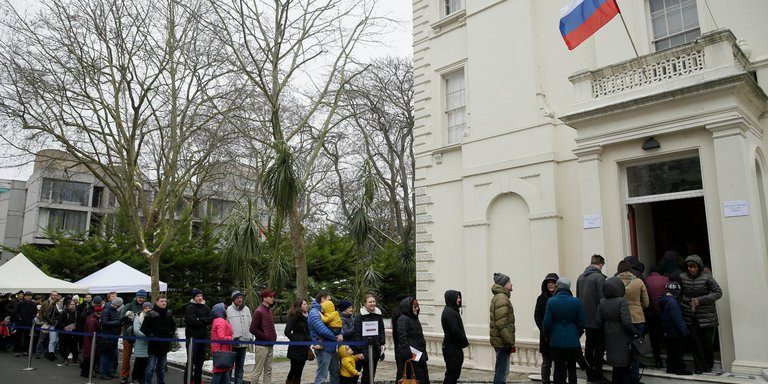 LONDON — For years, anticorruption campaigners have railed against Britain’s openness to ill-gotten riches from overseas and the foreigners who invest them. After a nerve agent attack on British soil, and the resulting diplomatic showdown between Russia and the West, that may be starting to change.

The British government said this week that it would review the cases of 700 Russians who were granted visas to live in Britain largely because they could invest millions of dollars in the country. And it signaled an openness to cutting off access to British financial markets for President Vladimir V. Putin’s government in Russia.

The government’s expressed determination to crack down on dirty money came on a day of rare good news in the poisoning attack. Yulia S. Skripal, who with her father, Sergei V. Skripal, was assaulted with a nerve agent, “is improving rapidly and is no longer in a critical condition,” Salisbury District Hospital said on Thursday.

Downing Street has promised before to punish Russia, particularly after the 2006 assassination of the Kremlin critic Aleksandr V. Litvinenko with a deadly radioactive isotope. But it dropped the matter once the headlines disappeared.

Some critics continued to voice doubts about whether this time would be any different. But the fact that Britain’s lax attitude toward corrupt fortunes and the need to change it has become a major topic of debate seems to signal a real change in the political atmosphere.

Lawmakers on the left and the right have demanded a hard line after British officials said Novichok, a military grade chemical weapon, was used against the Skripals in Salisbury, England, where Mr. Skripal lived, and the government blamed on the Kremlin.

Officials said the attack left residues around the town, endangering hundreds of people, though none are known to have shown symptoms. A police officer was sickened after coming into contact with the substance, which the authorities say they believe was put on the front door of Mr. Skripal’s house, but he is no longer hospitalized.

The primary action so far by Britain and its allies has been the expulsion of more than 150 Russian government officials, many of them suspected spies.

Prime Minister Theresa May of Britain promised measures to punish Mr. Putin and his circle financially. She offered few details, but said that they could include freezing Russian assets in Britain and passing a version of the Magnitsky Act, the American law that prohibits a list of powerful Russians from entering the United States or using its banking system.

[Read more about Britain’s options in retaliating against Russia here.]

Vladimir L. Ashurkov, the executive director of the Anti-Corruption Foundation, a group based in Moscow, said he had heard promises of reform before, but they were always undercut by a lack of urgency and inadequate resources for financial regulators and law enforcement.

“There is no real political will to go after corrupt money flows,” said Mr. Ashurkov, a Putin critic who now lives in Britain. “Maybe it will change in the current political situation.”

Governments of both British major parties have contributed to the permissive approach to foreign wealth, but Mrs. May and her Conservative government are under particular pressure to act, given the enormous international attention given to the use of a chemical weapon against people in Britain.

The Skripal attack has revived criticism that Conservative governments were not aggressive enough in investigating the Litvinenko murder and other suspicious deaths of Putin foes in Britain. In the wake of the nerve agent poisoning, the government has said it will re-examine those deaths.

Conservative lawmakers have also come under scrutiny for raising campaign money from wealthy Russians living in Britain and their associates.

Britain has some of Europe’s loosest rules for allowing foreign money into its banking system and for putting assets into corporations without disclosing corporate ownership — conditions that anticorruption groups say have attracted hundreds of billions of dollars in questionable money, invested in financial markets and real estate.

Britain has also been permissive about granting “investor visas” to people to live in the country if they bring millions of dollars with them, without careful examination of their wealth, though those rules were tightened in 2015.

“We’ve had a light-touch regulation approach, which means that money has come in — we have no idea really what money is crossing the border,” said Tom Keatinge, director of the center for financial crime at the Royal United Services Institute, a security studies group. Britain needs not just tougher rules, but also better enforcement of existing rules, he said, and “the political will to engage with those ideas.”

Yvette Cooper, a Labour member of Parliament, has called on the government to investigate the 700 Russians who obtained investor visas between 2008 and 2015. In a hearing on Wednesday, Amber Rudd, the home secretary in the Conservative government, said her department was reviewing how the program, including looking at people who entered under the old rules, “to see if there’s any action that needs to be taken.”

Tom Tugendhat, a Conservative member of Parliament, has been one of the most insistent advocates of tough economic measures, repeatedly calling on the government to ban the Russian government from raising money on British markets by selling bonds. He said corrupt Russian state-controlled businesses that are already banned by sanctions from British markets had gotten around that by having their government, indirectly, borrow for them.

“Surely we can do more to stop sanctions-busting when it’s done, effectively, by the Russian state,” he said in a hearing this week.

Mrs. May replied, “I understand the point that you’re making on this,” and promised to respond later in detail.

Last year, Parliament passed a law allowing the government to investigate “unexplained wealth” and to seize it if it appeared to stem from corruption. Experts say that is a powerful tool, but one the government has barely used so far.

Lawmakers have suggested other moves, like banning more Russian companies from British financial markets and revoking the broadcast license of RT, the Russian state-controlled television network.