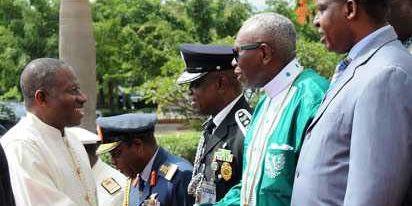 ABUJA — Against the backdrop of divergent views on the need to negotiate with the Boko Haram Islamic sect for the release of more than 200 schoolgirls abducted by the sect from Chibok, Borno State, President Goodluck Jonathan re-echoed the government position, yesterday, declaring that the Federal Government will not with the sect for the release of the girls. He said the abducted girls must be released unconditionally.
Senate President David Mark, on his part, had harsh words for the insurgents. He said Nigeria will never negotiate to exchange her people with animals who have declared war against parts of Nigeria even as former Chief of Army Staff,

Lt General TY Danjuma argued that Boko Haram had friends among Nigerians and such people should prevail on the sect to release the girls unconditionally.
The President who re-echoed the government position, yesterday, at the Asu Ekiye musical concert and fund raising ceremony in Abuja, advised Nigerians to shun religious and ethnic sentiments in the fight against terrorism.

Jonathan said Nigerians must stop the blame game and the pull down syndrome that are distracting the fight against the insurgents.

He said: “We have gone beyond blames and counter-blames, we are confronted with the reality and must not allow our emotion, religion or ethnic differences speak for us. We must protect Nigeria.”

Represented by his Senior Special Assistant on Youth and Student Matters, Comrade Jude Imagwe, the President commended the resolute spirit of the Nigerian masses in the face of the insurgency, saying Nigerians have won the fight against terrorism by their resolute spirit.

He urged Nigerians to support government’s efforts to bring back the girls, adding that the terrorists have declared war on the citizens and they must rise up as one to fight and win back the country.

“We must rise up to tell them that they cannot defeat us, they must release our sisters back to us unconditionally but Nigerians must join hands with the government to encourage our security agencies to find the girls and bring them back to us.

“Our security men are working, their mission is to ensure that Nigeria is a safe place and what Nigerians should do this time is to pray for them and support them.

“These are trying times for us, nobody believed that this can happen in Nigeria yesterday. No Nigerian would have imagined that a Nigerian will wake up one day to commit suicide but that is where we have found ourselves, so we must fight together.

“Government is fighting terrorism irrespective of the pull down syndrome, distractions and Nigeria will not stop moving forward.

“Because they know we are religious people, they wanted to divide us using religion, but when we defeated them, they resorted to attacking the citizens. It will take a collective responsibility of all citizens to come together to defeat them again, we must rise up as one people.”

We will never exchange our people with animals –David Mark

Senate President, Mark also declared that Nigeria will never negotiate to exchange its people with criminals who with animalistic instincts have declared war on parts of the country by killing people and destroying property without any justifiable reason.

Mark told a crowd of supporters of Senate Leader, Senator Victor Ndoma Egba in Ikom, Central Senatorial District of Cross River State on Saturday during a grand empowerment programme stated that Nigeria will deploy all available resources to combat the Boko Haram insurgents and their sponsors and defeat them.

“We are not negotiating with criminals who like animals are killing people and destroying property without any reason; we have the resources to wage war against anybody who declares war on us and defeat such people and their sponsors”, he said.

Senator Mark who was angry when he learnt of another bomb blast in Jos, said: “Ordinarily, nobody prays for war but in a circumstance where some people are sponsored to destroy a country, there is no other option than to fight and defeat such people. We do not care what name they go by or who their sponsors are but we have borne the pains of their attacks for too long and shall deploy every available resources to fight and stop such attacks”.

Boko Haram has friends among us — T Y Danjuma

General Theophilus Danjuma also called on leaders in the north and Boko Haram sympathizers to use all their means of communication and influence on the terrorist group to release the abducted school girls.

He made the call, yesterday, in Lafia during the 40th Anniversary celebration of the Emir of Lafia, Alhaji Isa Mustafa Agwai I. General Danjuma who was conferred with a traditional title at the emirs palace said “nobody has the mandate and should not be allowed to scatter Nigeria. Therefore, I urge all the elders and politicians who are in touch with Boko Haram to use your influence wherever you are to bring sanity to the North.

“To capture young girls and convert them to Islam at gun point is against Islam. General Buhari had earlier said that the activities of the Boko Haram are against Islam and nobody has come out to challenge him. I plead with you especially religious leaders to speak out.

“Initially when Americans were threatening to brand Boko Haram as a terrorist organization, there were uproars in Nigeria. Boko Haram has friends among us; those friends should use whatever influence and communications to plead with them to be civil. Please release our girls”.

Danjuma regretted the bad image with which Nigeria is being painted in the eyes of the international community as a result of the terrorist activities being perpetrated by Boko Haram. He noted that pre-election violence has started in some parts of the country, and therefore, called on everyone to join hands in the fight against terrorism.

Terrorism has no place in Islam — Sultan

Meanwhile, the Sultan of Sokoto and President of the Nigerian Supreme Council for Islamic Affairs, Alhaji Sa’ad Abubakar has condemned the Boko Haram Islamic sect, describing it as un-Islamic, as according to him, “terrorism has no place in Islam.”

The leader of Nigerian Muslims told the gathering of Islamic clerics, traditional rulers and political leaders from Northern Nigeria and other parts of the country that there was need for all well-meaning members of the Nigerian public to unite against the insurgents.

His words: “We must rise up, as always, with one voice to condemn all acts of terrorism, condemn those terrorists wherever they are and try our possible best as Muslims to ensure peace reigns in our community”.

The Sultan, like many other respected Islamic leaders in Northern Nigeria have been severally criticized for allegedly keeping quiet about Boko Haram.

He pledged his commitment to assisting the government in the efforts to restore peace to the troubled Northern Nigeria, in Particular and the nation as a whole.