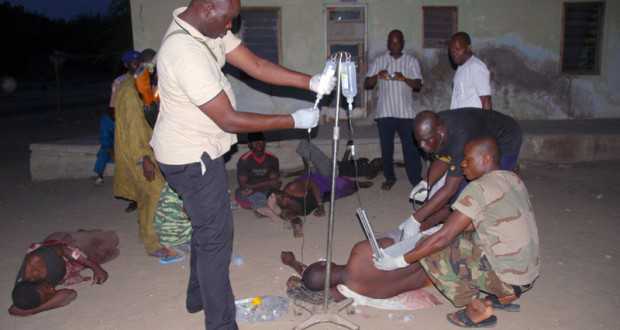 The emerging trend of Boko Haram terrorists’ killings and wanton destructions of properties in the recent days points to increasing intensity and unrelenting determination to overrun the military and indeed instill fears in people. The authorities of the Nigerian Army have confirmed that 50 people lost their lives in two bomb explosions that rocked Damaturu, the Yobe State capital, on Friday.

The Acting Director, Army Public Relations, Col. Sani Usman, said in a statement on Friday that 43 persons died in the first explosion which occurred at 7.40am and seven others in the second explosion.

Several other people were also said to have sustained varying degrees of injuries from the two explosions.

It was learnt a teenage girl and an elderly woman carried out the two attacks at the screening area for the Eid prayers in Damaturu.

The explosions occurred while the screening of intending worshippers for the early morning prayers was taking place at Layin Geange and ‘Phase 1 ‘ in front of the former Yobe State Secretariat, in Damaturu.

Usman said the situation was under control.

One of the residents, Musa Yusuf, who also spoke to our correspondent on the telephone, said, “There is apprehension in Damaturu as I am talking to you.  We are celebrating Sallah in fear with these explosions this morning.

“It is hard to ascertain the number of casualties now but the military and policemen are everywhere keeping watch in the town.”

Usman, who urged citizens to be calm and vigilant, said the Acting Chief of Army Staff, Maj. Gen. Tukur Buratai, and the Yobe State Governor, Ibrahim Geidam, sympathised with the families of the victims of the unfortunate incidents.

He said, “The situation is under control. Both Yobe State Governor and the Chief of Army Staff sympathise with and urged the people to stay calm and be security conscious.

“No amount of terrorist act will deter our resolve to stamp out terrorism and insurgency.”