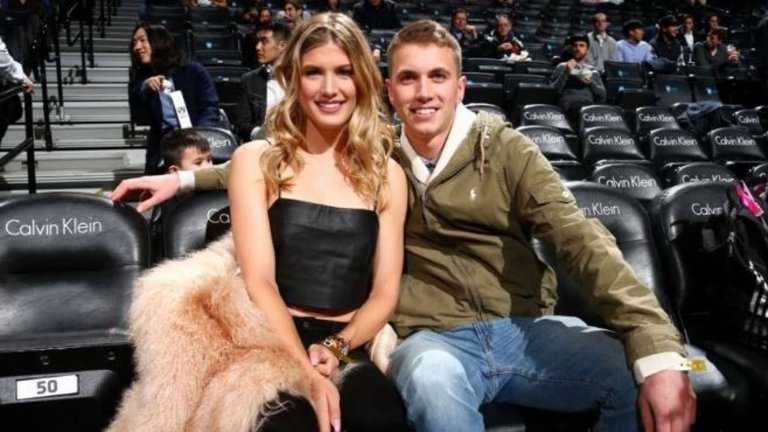 Goehrke, a 20-year-old University of Missouri student and New England Patriots supporter, won his dream date with Bouchard, 22, thanks to the Patriots’ stunning, record-setting comeback to defeat the Atlanta Falcons in Super Bowl LI this month.

With the Falcons cruising at 21-0 up, Bouchard confidently predicted an Atlanta triumph on Twitter. Goehrke then made his pitch for a date if the Patriots somehow fought back to win.

Bouchard agreed, only to then see Tom Brady lead the Patriots to an incredible 34-28 triumph.

On Wednesday night, she tweeted a two-person selfie photo with her date saying, “Just met my ‘Super Bowl Twitter Date’ John. On our way to the @BrooklynNets game!”

During the Super Bowl, Bouchard had tweeted: “I knew Atlanta would win btw. Just predicted the future.”

That prompted TW1, a Twitter identity sporting a photo of a man in a Cleveland Cavaliers NBA jersey, to tweet Bouchard with a longshot bid of his own.

“If Patriots win we go on a date?” came the pitch.

“Sure,” Bouchard replied, although she shot down a second such suitor with merely “C’mon…”

As the Patriots made their successful fightback, Bouchard was asked by another tweeter: “are you getting nervous?!? Lol.”

“Umm…kinda…,” she replied, adding later, “So…where do you live?”

“Lesson learned,” Bouchard posted later. “Never bet against Tom Brady. Lol it made a Twitter moment. And I will do it, I stay true to my word.”

Grab a NOW TV Sky Sports Day Pass and stay glued in to all the latest tennis action, including Grigor Dimitrov at the Rotterdam Open on Sky Sports all for just £6.99. No contract.