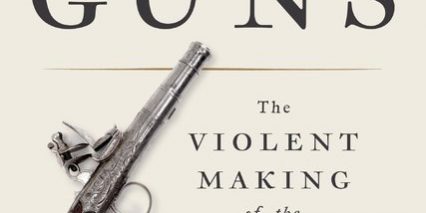 Review: ‘Empire of Guns’ Challenges the Role of War in Industrialization

Adam Smith, in his classic “The Wealth of Nations,” was an early proponent of the now mainstream view that wars are unfortunate accidents that have “crowded out” more productive investments.

In “Empire of Guns: The Violent Making of the Industrial Revolution,” the Stanford history professor Priya Satia aims to overturn this conventional wisdom about the role of guns specifically, and war and conquest more generally, in the world’s economic development.

Given that “Britain was involved in major military operations” for most of the years leading up to and during the Industrial Revolution, Professor Satia argues that imagining an alternative universe in which peace prevailed is a fool’s errand. (“It is impossible to factor the violence out.”) She contends, rather than crowding out infrastructure development, perpetual war actually “produced the financial structures that could fund it.”

Professor Satia’s detailed retelling of the Industrial Revolution and Britain’s relentless empire expansion notably contradicts simple free market narratives. She demonstrates that the deep partnership between the public and private sectors underpinned economic growth. Professor Satia argues convincingly that the expansion of the armaments industry and the government’s role in it is inseparable from the rise of innumerable associated industries from finance to mining.

Government planning played a central role even in the new technologies that are “arguably the most iconic developments of the industrial revolution,” like the steam engine and interchangeable parts manufacturing. Government investment “in manufacturing and technological progress” was viewed as “a national obligation in a time of political vulnerability.” Just as the United States government’s establishment of Arpanet, the precursor to today’s internet, laid the foundation of the current digital revolution, the British government’s financing of a wide range of technological and organizational innovations — many directly or indirectly associated with small arms manufacture — spawned the original Industrial Revolution.

On the subject of guns, “Empire of Guns” seeks to elucidate not only their industrial history but also their social and moral history. To tell these parts of the story, Professor Satia uses the Quaker church’s decision in 1796 to disown the prominent British gun maker, Samuel Galton Jr.

On its face, the decision by the Society of Friends to censure a flagrant arms merchant in its ranks may not seem surprising. Pacifist principles were central to Quaker ideology, as was opposition to slavery. Guns fueled not just war but the slave trade. Yet Mr. Galton’s father, and his father before him — and indeed many other Quakers who long dominated Birmingham’s arms industry — had been unapologetic gunmakers for 70 years without attracting rebuke. What had changed in the interim, in ways that are deeply interrelated, were society and the guns themselves.

Guns, for long after their introduction, were rather clumsy instruments of death. The unpredictability of guns had previously made them more suitable to terrorize than inflict harm. Despite their availability, guns were rarely fired in homicides, robberies, riots or even on the battlefield throughout most of the 18th century. But the British government, through enforced standardization and sponsored experimentation, drove “countless small innovations” that improved gun performance significantly by the end of the century.

Enhancements in gun technology increased both their ubiquity and use in violent human interaction by the end of the 18th century. This, in turn, corresponds with the shifting social and moral meaning of these inanimate objects, which remain so profoundly associated with the “impersonal, casual violence they enable.”

Professor Satia examines these changes not only across time but cultures. Although much of this exploration is fascinating, the detail can be numbing. Tracking the exhaustive catalog of Quaker family intermarriages and gun part transactions that characterized the 18th-century armaments trade, for instance, is quite a slog.

The biggest disappointment of “Empire of Guns,” however, is how little detail there is on the history of gun culture in the United States and its deep hostility to government regulation. The contrast with Britain — and, indeed, all other developed nations — is so striking that it begs for some kind of explanation, particularly given that Britain was historically more economically reliant on this sector of its economy.

Although Professor Satia does include a discussion of the role of guns from the founding of Jamestown in 1607 through the Revolutionary War, she focuses on the use of guns in the colonists’ interactions with Native Americans and various competing European powers. In the last pages of the book, she does include a critique of the historical myths underpinning the sweeping 2008 Supreme Court decision in District of Columbia v. Heller. The short discussion is provocative but seems disconnected from her writing on colonial life, which didn’t mention early state gun regulation or the Second Amendment at all: “The Second Amendment was not about protecting Americans from federal government [gun] seizure; it addressed the practical danger that militias might be disarmed by federal inaction, providing reassurance that if the federal government neglected to arm the militias, state governments might do so.”

Under this view of the framer’s intent, the “issue was not self-defense, but national defense.” Even if Professor Satia is correct about the problem originally targeted by the Second Amendment, “Empire of Guns” provides few clues as to how or why the focus has shifted so drastically in America over the ensuing centuries.

Despite mounting a vigorous public defense, Mr. Galton was ultimately unsuccessful in escaping rebuke from the Quakers. Many of the arguments he proffered have parallels to those made by contemporary gun rights advocates. Professor Satia has shown how the revolutionary changes in the very nature of guns and their role in society and the economy require those arguments to be considered in a very different light. To do that effectively at this time of national debate over our political, social and moral relationship to the modern gun, more work must be done to fully understand the source of “American exceptionalism” when it comes to our attitudes toward guns.

Jonathan A. Knee is Professor of Professional Practice at Columbia Business School and a Senior Advisor at Evercore. His latest book is “Class Clowns: How the Smartest Investors Lost Billions in Education.”