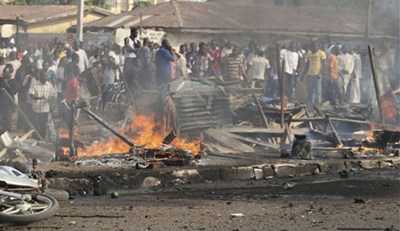 There was pandemonium in Gombe and Rivers States on Monday when both states were hit by a series of bomb blasts, one of which was masterminded by a female suicide bomber that led to the death of at least two persons.

The blast in Gombe occurred near the Pantami International Stadium in the state capital less than five minutes after President Goodluck Jonathan had left the stadium where he had gone to campaign for his re-election bid.

Spokesperson for the Gombe State Police Command, Fwaje Atajiri confirmed this to reporters shortly after the incident.

He said two persons lost their lives, including the female suicide bomber, while 18 others were injured.

“Two people lost their lives: the female suicide bomber and one other woman. 18 others sustained injuries and are being treated at the Gombe Specialists’ Hospital,” he said.

Mohammed Bolari, who was at the rally in Gombe, said the explosion occurred some three minutes after Jonathan’s departure, AFP news agency reported.

“The president had just passed the parking lot and we were trailing behind his convoy when the explosion happened,” he was quoted as saying.

The president had addressed a rally in Gombe a day after it was hit by two blasts that killed at least five people.

Since yesterday morning, the city has largely been on lockdown with security operatives restricting the movement of people in most areas, local reports stated.

A journalist told AFP the latest blast had led to an unrest in Gombe, with angry youths attacking supporters of the Peoples Democratic Party (PDP).

It may not have been as large as other bombings in Nigeria but the timing of the latest attack will have shocked the security forces. The violence is escalating in the run-up to elections due in less than two weeks time.

“They were shouting and denouncing the president’s visit which they blamed for the attack,” he added.

Also, members of the Gombe State Correspondents’ chapel of the Nigeria Union of Journalists (NUJ) were attacked by the thugs immediately after the blast occurred.

According to the Chairman of the chapel, Timothy Choji, the journalists who were trying to escape from the venue, which was close to Kashere street, where the blast occurred, had their bus damaged, with five of them sustaining various degrees of injury.

“Those injured include Adamu Saleh of the Daily Trust Newspapers, Abdullahi Tukur of the Federal Radio Corporation of Nigeria (FRCN), Williams Attah of National Mirror Newspapers, and Iliya Habila and Hajara Leman, both of the News Agency of Nigeria (NAN),” he said.

They were immediately taken to the hospital, treated and discharged.
Choji condemned the attack on the journalists, stating: “It’s most unfortunate that journalists were attacked because we are not partisan and will never be. I attribute this to illiteracy and the selfish aim of some politicians who use religion as a platform to achieve their selfish aims.”

He called on the authorities to protect the lives of journalists.

In another incident, hopes that the judiciary in Rivers State would re-open yesterday after being closed for eight months were dashed, as three High Courts in the state were bombed by unidentified persons.

In what appeared to be a synchronised attack, the High Courts in Port Harcourt, Isiokpo and Degema, were bombed with explosives suspected to be dynamite in the early hours of yesterday, bringing an end to speculations that the courts would re-open in the state.

THISDAY gathered that, while the attack on the High Court in Port Harcourt took place about 4 am that of Buguma took place at 4.30 am, while that at Isiokpo was about 5 am.

There was also an unconfirmed report that some hoodlums also broke into Omoku High Court.

The report said while the Omoku court was not bombed like the others, the hoodlums broke into the court and burnt some documents. No life was lost in any of the incidents.

The police in the state confirmed the incidents, describing them as a “coordinated attacks”.

A statement issued by the Police Public Relations Officer (PPRO), Mr. Ahmad Muhammad (DSP), said: “The Rivers State Police Command wishes to confirm that in the early hours of Monday 02/02/2015 coordinated attacks were launched on judiciary court premises at Degema, Isiokpo and Port Harcourt with explosive devices suspected to be dynamite by unidentified and unpatriotic assailants.
“Minimal damage was recorded at the Port Harcourt and Isiokpo scenes without affecting the court buildings and documents, while at Degema the court building was razed and documents burnt. No life was lost.

“The areas are now under police control, while Police Bomb Disposal Unit has commenced discreet investigations in earnest.”

He said it took the, “instant efforts of policemen particularly at Isiokpo and Port Harcourt to extinguish the fire resulting from the explosions and stop it from spreading beyond the point of impact”.

According to Muhammad, “The commissioner of police is deeply saddened by the tragic and senseless attacks on the temples of justice. We must realise that violence is never and will never be a solution to problem(s).

“The command has already put in place efforts that will lead to the arrest of the actors and sponsors of the attacks while soliciting for the usual cooperation from members of the public to assist the police in this regard.

“The command further reiterates its determination to provide adequate security to judiciary workers and all courts in the state.”

There were hopes that at last the judiciary in Rivers State, which had been shutdown for eight months, would reopen yesterday as workers in the state judiciary suspended their strike.

The state judiciary was shut down last year following the crisis that rocked it over the appointment of a chief judge for the state and alleged attacks on members of the judiciary.