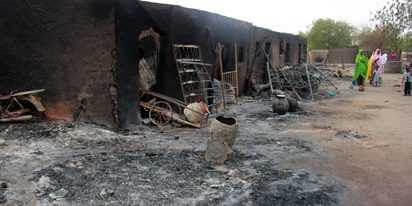 About 74 people have been killed by the dreaded Boko Haram Islamic sect in two separate attacks in Borno and Adamawa states. Kawuri town in Konduga Local Government Area of Borno State was razed completely when the terrorists attacked the town on Sunday, leading to the death of 51 people and a soldier.

At the end of the carnage, more than 300 houses and shops were razed, while scores of policemen and civilians were also injured. Kawuri is one of the big towns in Konduga, situated along Maiduguri-Bama Expressway and about 60 kilometres from Maiduguri, the state capital.

About 50 heavily armed terrorists were said to have invaded the town on the market day around 5p.m. and unleashed mayhem on residents and traders. Those injured in the attack are now receiving treatment at Konduga General Hospital and the University of Maiduguri Teaching Hospital. Our correspondent learnt that no

house was left standing after the attack. The gunmen planted explosive devices around the town, prior to the attack, according to witnesses and security officials.

Civilians were also killed in their homes, before the houses were set ablaze. “No house was left standing,” Ari Kolomi, who fled from the village to Maiduguri, the Borno State capital, said. “The gunmen were more than 50 and they were using explosives and heavysounding guns,” he added. Kolomi said he did not yet know if his relatives had survived the attack.

A senior security operative, who did not want his name mentioned, confirmed the incident to our correspondent yesterday. This is the second attack on the town. The first attack occurred in October last year when some Boko Haram suspects clashed with vigilance youth, popularly known as civilian JTF, leading to the killing of 10 people, including three youths.

Also, during that attack, 18 persons were injured, while 48 shops and 200 houses were razed. Governor Kashim Shettima, who was billed to visit the town yesterday, had to suspend the trip, following intelligence report that the place was not safe.

The terrorists were alleged to have planted Improvised Explosive Devices, IEDs, targeting rescue workers and security operatives deployed to maintain law and order in the area. A survivor, Mallam Mustapha Modu, said he counted about 47 dead bodies yesterday morning, while several others sustained gunshots and injuries.

It will be recalled that in the past week, 37 communities, including Kwaljiri, Kaya, Ngawo Fate, Limanti, Njaba, Yahuri, Mude, Wala and Alau among others in Damboa, Konduga and Gwoza Council areas, had been sacked by terrorists.

The displaced residents of those communities are now taking refuge in some neighbouring villages and Maiduguri as well as across the border in Cameroon. The state Police Commissioner, Mr. Lawal Tanko, confirmed the incident to our correspondent. He said over 40 people were killed while 25 sustained gunshots and injuries, after setting the whole town ablaze.

Tanko said: “I received an intelligence information that Kawuri town was attacked by Boko Haram sect suspected to be on a revenge mission on market day (Sunday), where many civilians were killed while several others were left with serious wounds before they set the whole place on fire, we have deployed our men to the area.”

Tanko, however, said that no policeman was killed during the attack. In Waga Chakawa village, in Madagali Local Government Area of Adamawa State, 22 died in an attack on a church service also on Sunday. Our correspondent learnt that the attackers set off bombs and fired into the congregation, killing 22 people, before burning houses and taking residents hostage during a fourhour siege.

It was learnt that two policemen were among the 22 victims of the attack. Some residents of the village, who fled the area told newsmen that they were attacked by gunmen suspected to be Boko Haram members during Sunday service.

“They used explosives during the attack on worshippers and many people lost their lives”, villagers said “I cannot actually say how many people were killed but I learnt that there are about 16 people evacuated from the church,” one of the residents who identified himself as Apogu said.

Another resident claimed that some houses were also attacked by the gunmen who took some men as hostage, while two policemen, an inspector and a sergeant who were on guard in the church were killed instantly. “I saw some people crying saying that their relations had been taken away as hostages by the gunmen,” the resident who did not want his name mentioned said.