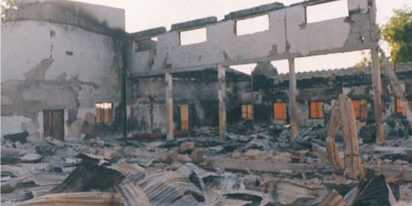 No fewer than five churches in Kwajaffa, Tashan Alade and other communities in Hawul Local Government Area of Borno were on Wednesday set ablaze by suspected Boko Haram terrorists.

Hawul, a predominantly Christian community in southern part of the state also shares local boundary with Garkida town of Adamawa state which came under attack by some group of insurgents last Sunday killing two soldiers and three civilians with the setting ablaze of Police station.

Hawul is about 30 kilometres to Biu Local Government Area and 220 kilometres drive from Maiduguri, the state capital which is witnessing series of attacks by terrorists suspected to have formed their camps around Zhur, Pelachiroma and Kwajaffa hills and valleys.

Our Correspondent gathered that the gunmen invaded the affected communities on Wednesday in the night targeting only churches using Improvised Explosive Devices and petrol bombs before setting them ablaze.

It was also gathered that the gunmen after destroying the churches told some communities members that their next target was the Local Government Headquarters Secretariat in Hawul.

Although, no life was lost, the gunmen operated freely without confrontation from either residents or security operatives.

The Caretaker Chairman of Hawul Local Government Area, Dr. Andrew Usman Malgwi confirmed the burning of churches in some of his communities with the threats that “the Council Secretariat will be the next target of the terrorists”.

He explained that the insurgents have now shifted their deadly attacks and destruction to Hawul, and therefore called on the Government to immediately deploy troops to safeguard lives and property of innocent citizens.