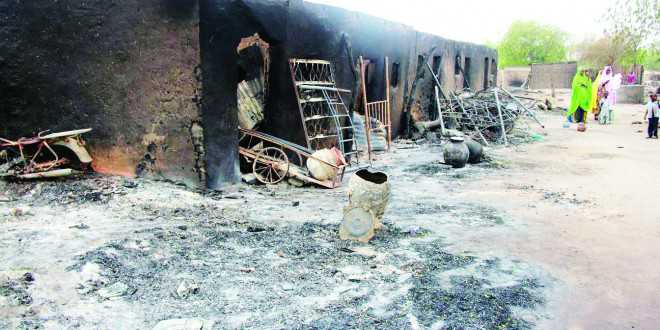 No fewer than 26 people were killed yesterday in attacks in the Northeast states of Borno and Taraba. Suspected Boko Haram gunmen killed 15 residents of  a Borno village and 11 died in ethno-religious violence in Wukari, Taraba State.

Dozens were also injured in the renewed violence in Wukari Local Government Area of Taraba State. Many homes were torched, as the crisis spilled to Ibi, Donga and other settlements.

Sources said 10 military men were injured in the crossfire when they attempted to stop the assailants, who were being repelled by the villagers. Police spokesman Joseph Kwaji said four bodies were recovered when the fighting ended.

Kwaji said the violence followed the burning of two kiosks in Sabon-Gari –a Muslim Hausa-Fulani dominated area of the town.

He said: “Some unidentified persons went and set ablaze two kiosks in Sabon-Gari -a Muslim Hausa dominated area in Wukari at about 6:00a.m.

“By 7:00a.m., there were sporadic shootings in the area. I can confirm that we have recovered four bodies so far.”

He added that security forces were deployed in the crisis zones to “intensify patrol and closely monitor the situation”.

Continuous attacks in the Southern and Central districts of the state have left hundreds of residents including security personnel, dead in the last few months.

Thousands of residents, especially Tiv and Jukun farmers, have fled their homes while property estimated at billions of naira, including farmlands, have been destroyed.

Acting Governor Garba Umar, a few days ago said he would bring down the insurgency in the state, after distributing about 75 patrol vehicles to the police, army, Civil Defence and other security agencies, and 180 motorcycles to vigilante groups.

Yesterday, passengers plying the Yola-Makurdi Road had a hectic time, as the vehicles conveying them to Jalingo, the Taraba state capital, were delayed in a traffic jam.

A commercial driver with Fair-Plus who was to travel to Port Harcourt said he attempted passing through Mutum-Biyu en route Bali to Katsina-Ala but had to turn back when he was told “the road is not safe.”

“I woke up fine this morning, but my constituency is on fire,” said the state’s opposition leader.

A member of the House of Assembly representing Wukari II, Daniel Ishaya Gani, said one of his houses was among the ones torched.

The lawmaker said the marauders invaded the town in large number, wearing military camouflage and shooting at sight any resident without provocation until military helicopters arrived at the scene to disperse them.

“As I talk to you, the military helicopters are still in surveillance of the area. The quantum of destruction this time is more than in previous violence.”

Another eye witnesses, who spoke with The Nation on telephone, said the attack, which  began around 8:am when many residents of Wukari were already in church quickly spread to  Rafinkada town, less than  10 kilometers from Wukari before spreading to Ibi Local Government.

The attackers were said to be wearing black vest, which is the trademark of Boko Haram fighters. “When a call came through from Wukari, we could hear gunshots in the background, so there is no doubt that the fighting was fierce,” a source in Jalingo said.

It was also gathered that Christians retaliated, repelling many of the attackers. Several civilians caught in the crossfire were reported to have died.  The Nation gathered that soldiers responded swiftly to the crisis.

The Military High Command in Abuja was also informed. Air Force fighter planes were sent to monitor the situation over Wukari town. But, as at 3: pm yesterday, the fighting was still on in Rafinkada and Ibi local governments.

Askira Uba shares boundaries with Biu, Chibok, Gwoza and Hawul council in the southern part of the state.

The attackers rode on motorcycles and one Hilux Toyota vehicle. After detroying the market, they reportedly carted away food items.