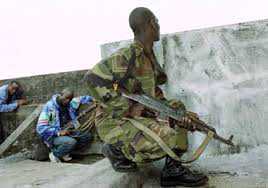 Four soldiers attached to the Special Task Force, STF in Plateau State were yesterday feared killed by gunmen who attacked their patrol vehicles in Gida Bua village of Langtang South Local Government Area of the state.

Villagers said that the members of the STF were patroling the village in their military vehicle at the early hours of yesterday morning when unknown gunmen opened fire on them, killing four. They said nine soldiers were in the vehicle when the gunmen struck, but five of them escaped.

The Chairman of the local government, Mr Bendel Nancwat, confirmed the incident to our reporter, and appealed

for calm saying that the security operatives were on top of the situation. Contacted, the Spokesman of the STF, Captain Ikedichi Iweha, said he would get back to our reporter after getting the full details of the attack.

Meanwhile, the state police command has said that it was are still investigating the bomb blast at the terminus market which left many persons dead, and that of the Bauchi road viewing centre, in order to unveil those who carried out the blast.

He debunked the rumours making the rounds that persons with IEDs had been arrested and were in police custody. Olakpe warned citizens of the state from spreading rumours that would put fear in the minds of people.